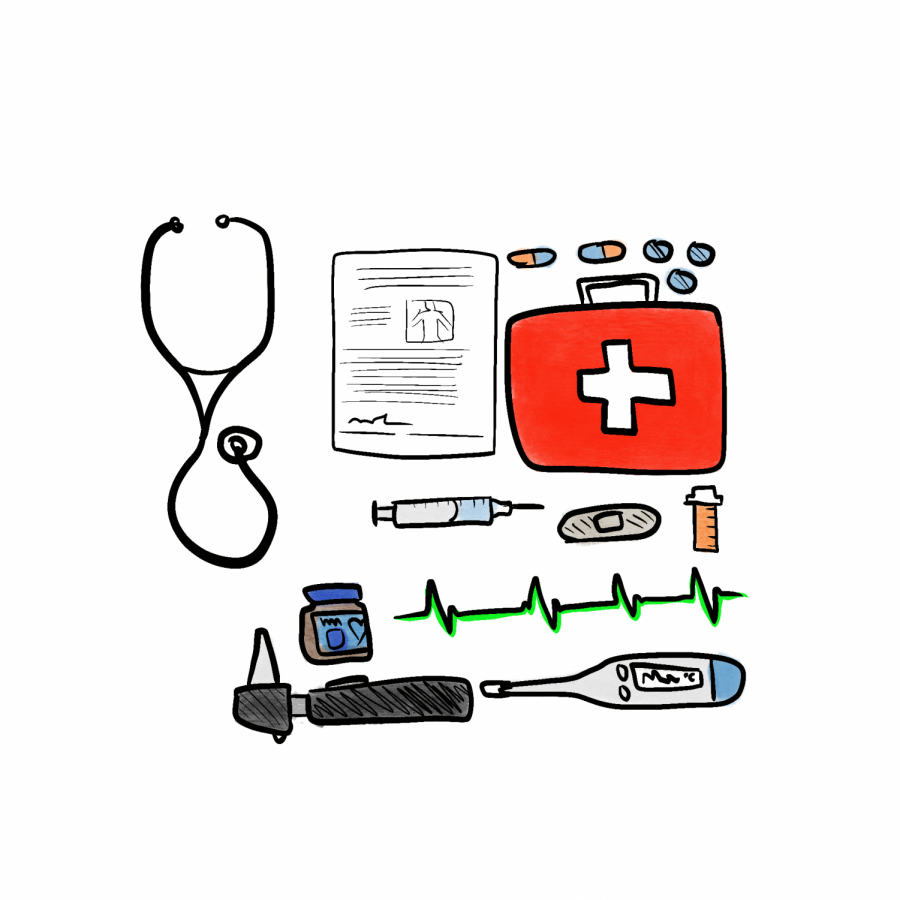 The College has made the decision to remove all but one healthcare plan offered to faculty and non-unionized staff. Next January, these groups will only have the option of a high deductible health plan, which will reduce premiums but increase out-of-pocket expenditure

All non-unionized College employees will shift to a Consumer Driven Healthcare Plan and Health Savings Account starting Jan. 1, 2022, ending the option to continue on a Traditional Preferred Provider Organization plan. Switching faculty and non-unionized staff to CDHP-HSA is expected to save the College $1.2 million per year. However, many professors say that the switch leaves them with fewer choices and higher out-of-pocket costs.

In 2019, the Academic and Administrative Program Review identified employee benefits — including the cost of healthcare — as a recommended way to reduce spending and increase the financial longevity of the College.

Assistant Professor of Politics and Comparative American Studies Jenny Garcia is not happy about the way the switch will impact her family.

“The new plan is going to significantly increase the costs of healthcare for my family,” Garcia wrote in an email to the Review. “It seems like these types of plans can help those who rarely go to the doctor and those who have significant health-related expenses, [but] for those of us in the middle, like my family, that have to see doctors fairly regularly and have some other health-related expenses, this is going to cost us a good deal more money.”

Vice President for Finance and Administration Rebecca Vazquez-Skillings says that the move to a CDHP-HSA aligns Oberlin with a general trend in healthcare in the U.S.

However, each plan has both benefits and disadvantages, so comparing them can be complicated and nuanced.

A deductible is the minimum amount spent on healthcare goods and services before the insurance company starts providing coinsurance. For most insurance policies, nothing except copays and certain preventive care is covered until you’ve met your deductible. In 2019, the in-network deductible for a single individual on the Traditional PPO plan was $550, which jumped to $1,500 at the beginning of 2021. Additionally, the Traditional PPO plan had an extensive list of copayment opportunities prior to reaching the deductible, which included payments on non-preventive medication. For family plans, the deductibles were $1,100 in 2019, and $2,500 in 2021.

According to the Summary of Benefits and Coverage documents made available by Human Resources, while CDHP-HSA covers preventive care and copays before the deductible amount, which is $2,000 for individuals in-network and $3,000 for families, it does not actually offer any possible copay services, including non-preventive medication, which is in stark contrast with the Traditional PPO plan.

Vazquez-Skillings explained that the College’s compensation committee — a group composed of faculty and administrative professional staff that helps advocate on behalf of employees of the College — had previously approved of raising the deductible in lieu of shifting entirely to the CDHP-HSA plan.

“[In] spring of 2018, the Compensation Committee was asked to present a series of recommendations to help to address what was happening with healthcare costs,” Vazquez-Skillings said. “One of the recommendations was to change the deductible on the Traditional PPO beginning in calendar year 2019. This recommendation was accepted, so that’s part of why you see the increase in the deductible in that year. There was an interest among faculty and A&PS staff to maintain the Traditional PPO, and this change was sort of the means to do that and manage costs in that year. Unfortunately, this would not help to manage costs over the long term.”

Nathan A. Greenberg Professor of Classics Kirk Ormand had a different account of the Compensation Committee’s stance on the CDHP-only route.

“[The Compensation Committee] actually looked at this question over the past couple of years, and they came out with an unambiguous recommendation that the College not go in this direction,” he said.

The new CDHP-HSA plan also allows the holder to have a tax-free healthcare savings account, into which they can deposit money to be used in the event of a medical emergency. For individuals previously enrolled in the high-deductible plan, the College has made a yearly contribution of $1,000 into this savings account, and, in addition to making this deposit for everyone next year, will provide a one-time-only additional contribution of $500. All deposits roll over each year, and the HSA can earn interest over time, which will also remain tax-free.

However, if an individual is enrolled in Medicare, for which age-eligibility is 65 years, they can no longer deposit funds into their HSA. However, they are allowed to continue spending funds already accumulated before their enrollment to Medicare. Once they enroll with Medicare, the College will shift retiree insurance policies to an Employer Group Waiver Plan, which is federally regulated and will allow policy-holders to receive Medicare benefits and advantages through Medical Mutual of Ohio.

When thinking about the structure of the plan, Chief Human Resources Officer Joe Vitale emphasized that all the same opportunities in the Traditional PPO are available in the CDHP-HSA plan.

“The plan design is the same for both the CDHP and the traditional PPO,” Vitale said. “For example … both of the current plans’ diagnostics for preventive services, as defined under the [Affordable Care Act], are covered at 100%; the choice to keep going to your current physician in the network is also the same. The formulary, meaning all the prescription drugs that are covered in the traditional PPO plan, are the same in the CDHP. The care and services are the same.”

As depicted by Figure 1, there has been a steady increase in the deductible amount, even prior to the mandatory shift to the high-deductible plan. Traditional PPO single-policy holders had an increase of $950 in deductibles between 2019 and 2021, even though they were on the same plan. Meanwhile, families paid an additional $1,400 to reach their deductible. The shift to the high-deductible plan continues the trend of higher out-of-pocket rates for College employees.

Still, the maximum out-of-pocket — the amount after which the insurance company bears the entirety of the cost burden — has gone down under CDHP.

“If you look at the out-of-pocket maximums for [Administrative and Professional Staff] and faculty with single coverage, the out-of-pocket maximum in-network for the CDHP is $4,000, as opposed to $6,000 for the PPO,” Vitale wrote in an email to the Review. “A&PS and faculty with a catastrophic medical issue and costs that exceed $4,000, you don’t pay anything in excess of the cap in the CDHP. That is to say your expense is capped, other than your premium. In the traditional PPO, you keep paying up to the cap of $6,000.”

According to Ormand, the impact of the shift to a CDHP-HSA plan falls heavier on older individuals, and others with health concerns.

“So if you are young and healthy and you don’t need much healthcare, a high-deductible plan can make good sense for you because you pay lower premiums, [and] you can save money through the healthcare savings account,” Ormand said.

The higher deductibles also mean that individual policyholders take on a higher risk themselves, which means overall lower premiums — the amount an individual pays as a subscription to the insurance policy. Vitale explained how insurance premiums are calculated for Oberlin employees.

“The premium is the cost an employee pays to have the plan to have healthcare,” he said. “The way we calculate it at Oberlin is a progressive model, meaning your premium is based on a percentage of your salary. For comparison, single coverage for A&PS and faculty under the PPO is currently set at 2 percent, for the CDHP it’s less: at 1.75 percent. This rate will remain the same in 2022.”

Vazquez-Skillings also emphasized that the decision doesn’t take away the element of choice from College employees.

“With the changes we are maintaining the choice that employees have as they seek out their care,” she said. “For some, this change may require more engagement in the selection of service locations, for example x-rays. There continues to be an opportunity to use tools to identify service providers that have been available previously. The College will make more tools available when employees making those choices, but choice is not what’s limited; that is not the key change. The key change will be the method for paying for the employee portion of healthcare.”

An example provided by Medical Mutual of Ohio calculated the cost based on pregnancy services like specialist office visits, childbirth professional services, facility services, and diagnostic tests, such as ultrasounds. The entire cost was then broken down into the minimum deductible, plus any copayments and coinsurance, while accounting for any limits or exclusions. Using the numbers made available by Medical Mutual, Figure 2 illustrates costs borne by employees across three different scenarios.

The costs for the services go up by thousands of dollars not only between 2019 and 2021, but significantly under the CDHP-HSA plan. When analyzing the other two examples for 2021, individuals are still projected to pay approximately $100 less on the Traditional PPO plan as compared to the CDHP.

Despite the apprehension about this decision, Chief of Staff David Hertz emphasized that he does not anticipate the switch having a large impact on employees’ experience.

Vazquez-Skillings also maintains that the merits of this decision go back to the analysis performed during the AAPR process.

“Our plan results from the work and analysis that we performed and has our financial goals in mind,” she said. “When we were developing this plan, we were focused on how we can establish a sustainable future for Oberlin College while maintaining high quality healthcare options for our faculty and staff.”

Garcia, however, has concerns for the long-term consequences of this decision.

“I think this change in healthcare speaks to the larger issue of faculty compensation,” she wrote. “We’ve had few pay increases since I’ve been at Oberlin. Our salaries are already lower than our peer-institutions. Now, in combination with the new healthcare plan, our compensation is even worse. Not only is this demoralizing at a time when everyone at Oberlin is putting in extra time and effort to adapt to the changing conditions of the world, but I fear that it could have long-term implications for Oberlin. I know several people who have/are applying for jobs elsewhere. I worry that Oberlin will have a hard time retaining faculty for the long-term — losing parts of what makes Oberlin special, like long-term connections with faculty after graduation, long-term investment from faculty in developing programs, new curriculum, etc.”