On The Record with Bella Sin, Burlesque Superstar 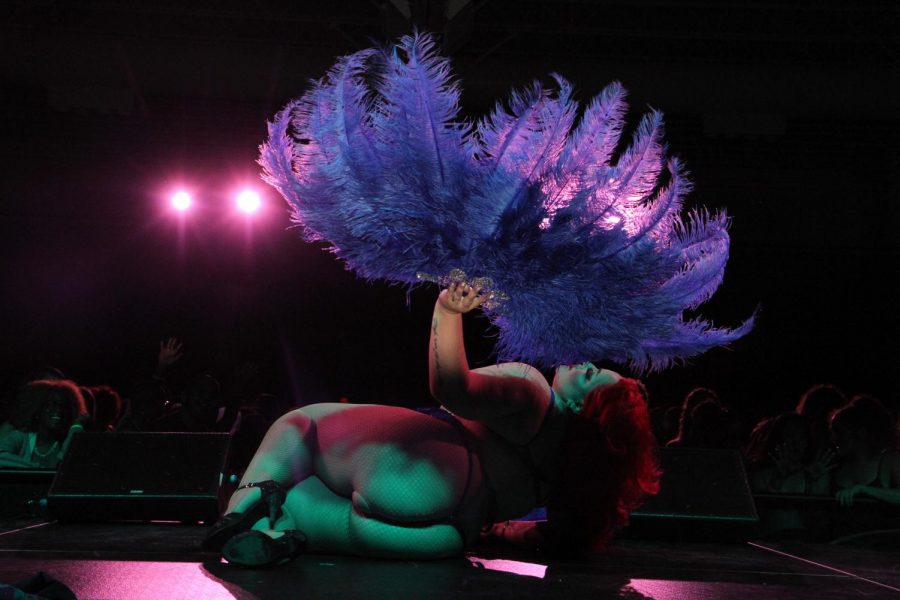 On July 31, the performer credited with revitalizing Northeast Ohio’s Burlesque scene lit up the Solstice stage — Oberlin students will not be soon forgetting the name Bella Sin.

This past Saturday, Burlesque superstar Bella Sin graced the Solstice stage in Oberlin’s Heisman Club Field House. Sin is an on icon of Burlesque, a type of variety show that involves elaborate dance and intricate and erotic costumes. Sin was declared one of “Cleveland’s Most Interesting People” in 2011 by Cleveland Magazine and carries the running title of “Cleveland Burlesque Queen.” Sin’s Burlesque performances are largely informed by their background in latin dance. Their performances generally integrate Burlesque strip-tease with Latin dance technique and a love for Burlesque history, and have created immense wakes in the Burlesque community. Sin has been the executive producer of the Ohio International Burlesque Festival for the entirety of its 10-year existence and is widely credited with reviving Northwestern Ohio’s Burlesque scene. On top of their multitude of achievements in the burlesque world, Sin is also an activist, instructor, historian, actress, and philanthropist.

Where did you grow up and how did you get into burlesque?

I grew up in Juárez, Chihuahua, Mexico — it is a border town. I had a really nice childhood, which makes me really happy, but I also remember a lot of struggle. Where we lived wasn’t particularly a nice area. There were always shootings, there was always violence. Femicide is actually one of the biggest issues in Mexico for Mexican women, trans women, anybody femme to be honest with you. It’s challenging for some people to understand the amount of violence that there was in these areas. My mom and my dad divorced when I was 11, so I grew up with a single mother with three jobs. We had to find a way to survive over there, and we did, just by the grace of my mom — it was me, her, and my sister. We moved to the United States in the late ’90s, early 2000s. My mom came back from Denver, married, and we moved within months. My sister stayed back and I came with my mom to the states and from there I started going to public school, which was interesting to me because the schools that I came from had a very strict educational atmosphere. I started noticing disparities, divisions, within public school. I went to a school that was predominantly Mexican. But that public school is where I found the book that inspired me to be a burlesque performer. It’s called the Historic Pictorial of Burlesque. After [discovering the book] I found some burlesque classes, lied about my age, and entered. My debut performance was in 2003 at a goth bar — it was a mess, I loved it. It was my first interaction with performance on my own terms.

In finding the book and having your first performance, did you immediately know burlesque was what you wanted to do?

I just said, “That’s my future.” I found my passion at 16 — who can say that? It was just what called to me. Like any good Sagittarian, what we want we get. And we work super hard towards it. But I also was very understanding that I had one chance to make it in this country as an immigrant. I’m also Indigenous, and my family always made sure that I knew that I had one chance to make it work. Any opportunity that is tossed to me I take, but I take people with me that need to be heard and seen and loved and cheered for, and most of those people are members of marginalized communities. You often think burlesque is diverse, but it’s not.

It sounds like you do things big and fast.

I often don’t think of them as big but as the things needed for me to move forward to my next project or stage of my life– If we do not take risks we can’t really achieve. But I think, through the years, people see the success, but there was struggle. Not only was I a plus-sized person, but I have an accent, and I embrace that now. But back then, I had to hide it. And also as a queer person, I was becoming very private about my personal life, because I wasn’t out — I was actually outed online. But the biggest struggle really was being a Mexican immigrant, because the questions people would ask would be like, “Hey, are you here illegally?”, “People won’t hire you if you speak in Spanish, do music in Spanish.” Nobody likes Mexicans here. I heard the gambit of it.

What motivated your drive and endurance in launching so many independent projects and reaching such high levels of achievement in such a short amount of time?

My family always said, when we don’t have money, we have hands. And I put my hands to work for my own local community because when you see injustice, you stand up. I worked as an activist and volunteer for many different organizations, but if it wasn’t for the lessons that I learned within the LGBTQ community, I don’t think I would have been here. They like to give me awards every so often, and I’m just like, I really don’t need them. I just need a nap and possibly a coffee.

Is your engagement with advocacy and activism at all related to how you see yourself as a performer?

When it comes to my activism, I keep it a bit separate from my performance. Choosing the right place and time to say something and do something is important. But my activism actually came from my family. My aunt was very present in political protests in Mexico for equality and equity. My mom and my family always supported equality, us having LGBTQ family members like me. They taught me to stand for what’s right.

And I also grew up in a very tumultuous time in Mexico, where you had to speak up and stand up. And that’s what I took away from my upbringing in moving to the United States. It was not the American dream that we were coming to. We knew the difficulties coming into the U.S., and I think the best notion of it came from a conversation I had with my grandmother when I was very, very young. I’m the lighter one in my family, and she said that I’m a shield. I can go ahead and take enough hits for my family and community. I have to protect the people that don’t look like me. So I took that to heart and I always have been a shield towards my community when they need me to be, but I wish I would’ve known how much that can put you in danger. For the longest time, self-assimilation took a toll on me. As immigrants we’re taught to be quiet, to be unassuming, to not call attention to ourselves, and obviously that’s not what I’m doing — I’ve got bright-red hair. I don’t want to hear people say, “You have to be the straight-A advocate,” because we all have made mistakes when we’ve grown up in this society. It’s about how you handle it and grow from it and learn from it and how you use that knowledge to protect the people around you. So I think that’s where my advocacy differs from stage, because I gain my fame from being Bella Sin, but I use my platform to speak about important issues.

Is there anything else you want Oberlin to know?

If you can tell every single student there, specifically to people of color, don’t dull your voice or your shine because somebody thinks you’re too loud. Just f***ing go for your dreams. Just do it.