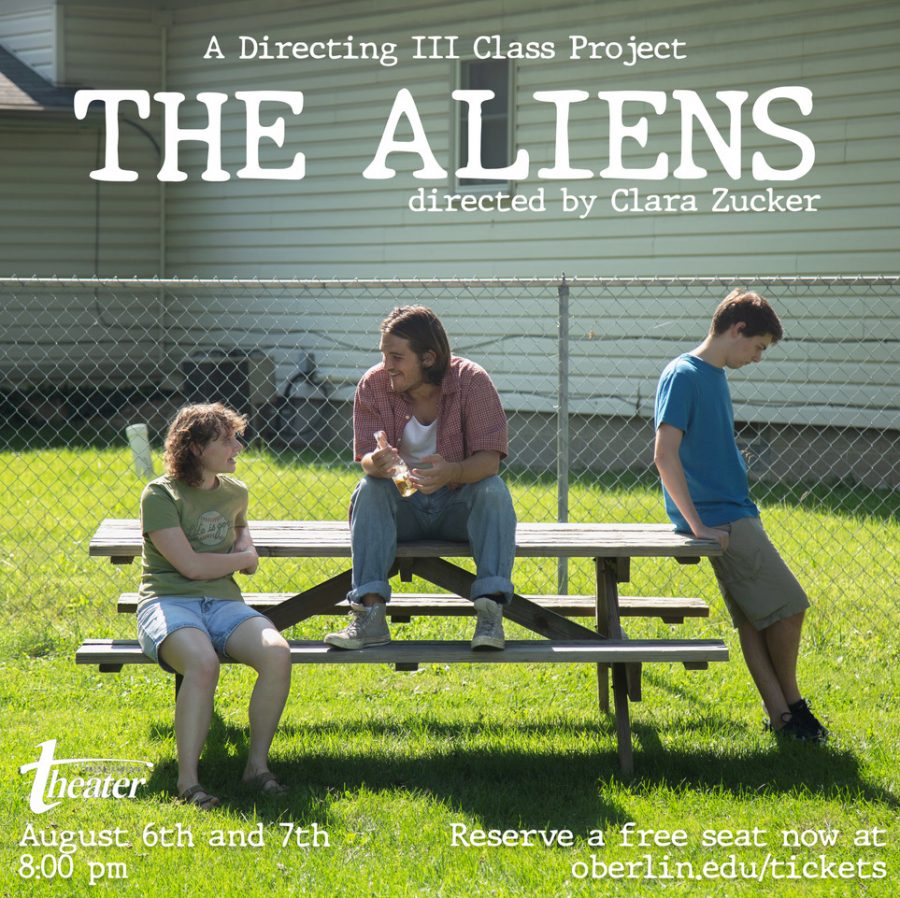 The Aliens, opening on Aug. 6, marks the first-ever student directed production to air on the stage of the Irene and Alan Wurtzel Theater.

After a semester of preparation, students are returning to the Irene and Alan Wurtzel Theater for the first time since the onset of COVID-19. The Aliens, directed by College third-year Clara Zucker, will open on Aug. 6 and kick off a series of three plays showcasing the directing skills of students in the class Directing III Lab Productions. Not only does the show represent the milestone of returning to live, in-person performances — it is also the first-ever student-directed production to grace the stage of the Wurtzel Theater.

Written by American playwright Annie Baker, The Aliens depicts the social isolation and growing pains of life in small-town Vermont. In the alley behind a coffee shop, KJ and Jasper, washed-up college and high school dropouts, loiter and discuss poetry and music. The pair of 30-year-olds take Evan, a high school senior and a new employee at the coffee shop, under their wings.

“It has been interesting doing a play that draws so much of its power from themes like isolation and loneliness,” College third-year Ro Miller, who plays the role of Jasper, wrote in a message to the Review. “We have all struggled to some degree with both of these [themes] over the past year and Oberlin has seemed, at least to me, somewhat of a respite from these feelings.”

Showing tonight and tomorrow, the highly anticipated performance has had to rapidly adapt to the College’s Aug. 2 reinstatement of the indoor mask mandate.

“Suddenly, the reality of [COVID-19] and masks has come rushing back,” Miller wrote. “And, to me, this is what The Aliens is all about — our resolute struggle towards connection and understanding no matter how many setbacks we may face. I think The Aliens is a play that rides the razor’s edge between devastation and hope. In that way, I think it mirrors both the world and the people who inhabit it in a very unique and special way.”

In some ways, the sudden necessity of masks will take the realism of the play’s narrative to a whole new level.

“There’s definitely something beautiful about it because it’s a very realistic play in a lot of ways — like the dialogue is realistic,” said College third-year Jane Hobson. “With the masks now, it’s a whole new level of realism.”

In The Aliens, Hobson plays the unemployed KJ, who drinks mushroom tea every day and is — according to Hobson — a chaotic lesbian still living with her mother.

“There’s so much chaos in this play and in the world of the play and the characters’ minds,” Hobson said. “But, ultimately, they just want togetherness. They want to be loved and have each other and have this little family. And there’s something very intimate and nice about that.”

College second-year Owen Anderson, who plays the role of Evan, discussed the ways in which the cast has struggled to adjust course as a result of the mask mandate.

“We’ve just been relying on physicality more,” Anderson said. “How close do I get to the other actors? How comfortable am I around them? How much do I show my face? I have to eat on stage. Basically, am I comfortable pulling down my mask to eat or drink water? That’s the kind of stuff that we’re thinking about.”

With only a three-person cast, it is crucial that the cast and crew have cohesion. Hobson said that up until this week, things had been going smoothly. According to her, Zucker has done a phenomenal job as a director in bringing this group together. Even with the renewed mask policy, she stressed that everyone involved has displayed incredible work ethic. Still, for Hobson, it has been frustrating to shift gears at the eleventh hour.

“I’m not going to act like it’s like this blessing for us because it’s not,” Hobson said. “It was definitely just stressing that literally days before opening, we have had to deal with this new mask policy. We’ve put well over 100 hours of work into this, and we weren’t planning on wearing masks. So yeah, it’s definitely going to affect the play. I think ultimately we’re going to make it work, but I’m not happy about it.

Zucker has been directing since she was a senior in high school. She has already directed a number of plays in her college career through the Oberlin Student Theater Association including Mr. Marmalade, Athena, and The Curious Incident of the Dog in the Night-Time. For her, a setback such as masking is preferable to having an actor drop out of a three-person cast.

“It’s definitely a challenge, but I will say there’s always things that happen last minute when you’re doing a show,” said Zucker. “Actors get sick and can’t perform, or you lose power, part of the set breaks. A lot of directing is about problem-solving, so it’s not that that part of it wasn’t new to me. I think it’s a new challenge for the actors, because they’ve never done a show with masks on. But it’s all about just incorporating it into the world and into the characters.”

At the same time, much of this play utilizes non-verbal expression. Like many of us during COVID-19, Anderson has become well-versed in communication without the presence of facial expressions.

“I mean we basically have to think about it in every moment,” Anderson said. “And it’s not too hard, right, because it’s kind of the world that we’re living in. And now the world of the play that we’re in is also dealing with this same challenge.”

Ultimately, the mask mandate did bear feelings of disappointment for the cast of The Aliens, particularly given its arbitrary nature in light of the amount of time the group has spent in close contact on stage. And though these feelings will likely persist, Zucker and cast members alike are grateful to be able to perform in-person at all.

“We feel really lucky to even be in a live space with a live audience in a theater and have had a rehearsal process where we’ve been able to be in-person and work together,” said Anderson. “We haven’t talked about it as much but now that the mask mandates have come back, wow, that was really, really special …  we’re really thankful that we’ve been able to do this type of in-person performance and process.”