Quinn: Beacon of Hope for Transgender and Non-Binary Athletes 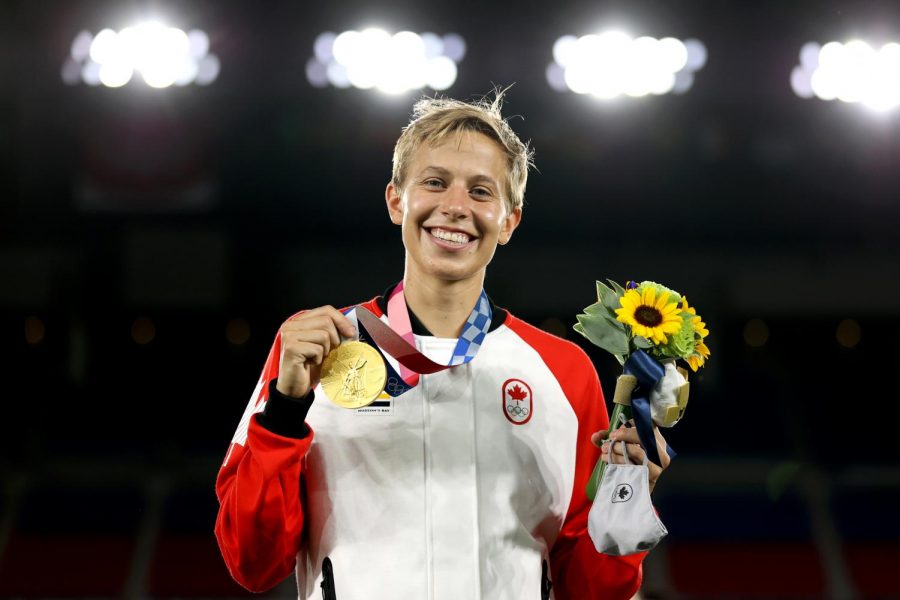 Canadian soccer player Quinn made history at the Tokyo 2020 Olympic Games by becoming the first openly transgender and nonbinary athlete to win a gold medal.

Rising College second-year and field hockey and lacrosse player, River Schiff, says that he is inspired by Quinn and their accomplishments and thinks that this victory for trans athletes proves that they are capable and deserving of being at the top of their game.

“This definitely means that they can complete,” he wrote in an email to the Review. “Although there are still barriers, especially with regards to assigned male-at-birth women, seeing an athlete competing at this level that has the voice to speak out is everything.”

“There’s definitely people who are out but not visible,” he said. “Quinn seems very comfortable sharing their life and their transition online which can be super helpful for young athletes who are hesitant or scared. Having any ‘first’ in the Queer or trans community on a global scale is a super powerful first step and opens the door to so many people all around the world.”

According to Sortor, Quinn is a beacon of hope and role model. When Sortor was an incoming first-year, he says the only trans athlete he knew of was Schuyler Baylor, who swam for Harvard University.

College second-year field hockey and lacrosse player, Post, believes that this platform Quinn now has can be used to support underrepresented athletes who are a part of the LGBTQ+ community.

“Specifically, as a white nonbinary person, I think Quinn has the chance to better advocate and celebrate the trans people of color that came before them and helped pave the way,” Post said.

Scott thinks it is important for people to see representation of any kind, but it is important to realize that out white trans athletes such as Quinn are not necessarily going to make it easier for Black trans athletes for instance to feel the same acceptance or welcoming into these hyper-controlled institutions.

“Fundamentally, I think there needs to be a large reckoning within the competitive athletic community on the written protocols and rules that have controlled athletes bodies and made it extremely difficult for trans athletes, and other athletes that do not fit into the perceived “normal” constraints of what an athlete “should be”, to compete how they want,” they said.

The 25-year-old soccer star has previously won a bronze medal with the Canadian soccer team in Rio de Janeiro in 2016 but did not publicly come out as trans until September 2020. This Olympics, Quinn has become the first openly trans athlete to compete.

The Tokyo 2020 Olympic Games have been coined as the “most inclusive Games to date.” At the last Olympic Games in Rio, ​the number of openly LGBTQ+ athletes was just over 50 — and there were no openly trans athletes​. ​It was only in Athens in 2004 that trans athletes were formally allowed to compete in the Games.

At Oberlin, Schiff says he has definitely felt supported by the athletics community.

“People are very much willing to listen to my unique stance as a trans athlete,” he said. “We have a huge nonbinary/trans presence on field hockey too, which is really affirming.”

The field hockey team is currently talking about how to navigate some of their more gendered spaces, like locker rooms, and addressing any accessibility concerns.

Similarly, Sortor says he has had a great experience as a trans athlete at Oberlin. He was originally recruited his junior year of high school for the women’s track and field team at Oberlin and asked if he could run for the men’s team instead.

“All of the coaches were super supportive and even sent me pictures of the locker room options,” said Sortor. “They were respectful of what roster I wanted to be on and made sure I felt good about my uniforms too.”

Post credits the quality of their experience as an athlete at Oberlin to their teammates.

“Both my teams are really supportive and they’ve helped me take my time and make sure I’m ready to be who I am,” Post said. “I think my teammates’ support makes up for the parts of Oberlin athletics that aren’t that supportive.”

“I think what’s hard is there’s not a standard for coaches on how to support their trans athletes because we’re all in such different places,” Post said.

Quinn, who has been a pivotal midfielder for the Canadian soccer team, started receiving messages from young people saying they’ve never seen a trans person in sports after they beat the United States Women’s National Team in the semifinals.

“First openly trans Olympian to compete — I don’t know how to feel,” they wrote in a July 22 post on Instagram. “I feel proud seeing ‘Quinn’ up on the line-up and on my accreditation. I feel sad knowing there were Olympians before me unable to live their truth because of the world. I feel optimistic for change. Change in legislature. Changes in rules, structures, and mindsets. Mostly, I feel aware of the realities. Trans girls being banned from sports. Trans women facing discrimination and bias while trying to pursue their Olympic dreams. The fight isn’t close to over and I’ll celebrate when we’re all here.”

Schiff agrees with Quinn that the fight is far from over and believes there’s still a lot that needs to be done to move forward in terms of representation for trans and nonbinary athletes.

“We need to diminish constructs of gender in athletics,” he wrote. “It is such a gendered environment that we have to dismantle for the acceptance of LGBTQ+ people. I understand that transitioning is complicated, but there are things that can be done to be able to recognize natural talent in an affirming way, and let trans people compete.”

Sortor also highlights that there’s not a lot of research into how hormones and taking testosterone as a trans athlete affects performance.

“The difference between someone taking testosterone for two weeks versus someone like me who has been on it for two years is huge,” said Sortor. “But for transmasculine athletes, as soon as you start taking testosterone you have to switch to compete for a men’s team,” he says.

He also points out that there needs to be more education. He says that there have been instances of coaches lacking respect for their trans and nonbinary players at Oberlin.

“That has been super frustrating to hear, because I’ve had such a good experience, while others can’t even have a basic level of respect,” he said.

Scott points out that while Oberlin markets itself as a very inclusive place, oftentimes people take this for granted, or forget to uphold or work for these values.

“Passivity and performativity with topics like inclusion and acceptance are often so normalized within our community, and if we really want to make Oberlin the place that it says it is, we need to work for it in more ways than talk.”

Post believes that coaches are working to get there but that their work right now isn’t enough yet.

“I think, because I know there are going to be other trans and nonbinary athletes that come after me, I’m fiercely protective of them and their ability to feel welcome on and off the field,” Post said.

Post says they’re fighting for a better level of respect especially for new athletes who might be coming from a non-affirming space.

“At Oberlin’s core, we want it to be a safe space, and right now it’s up to the current athletes to fight for that space.”