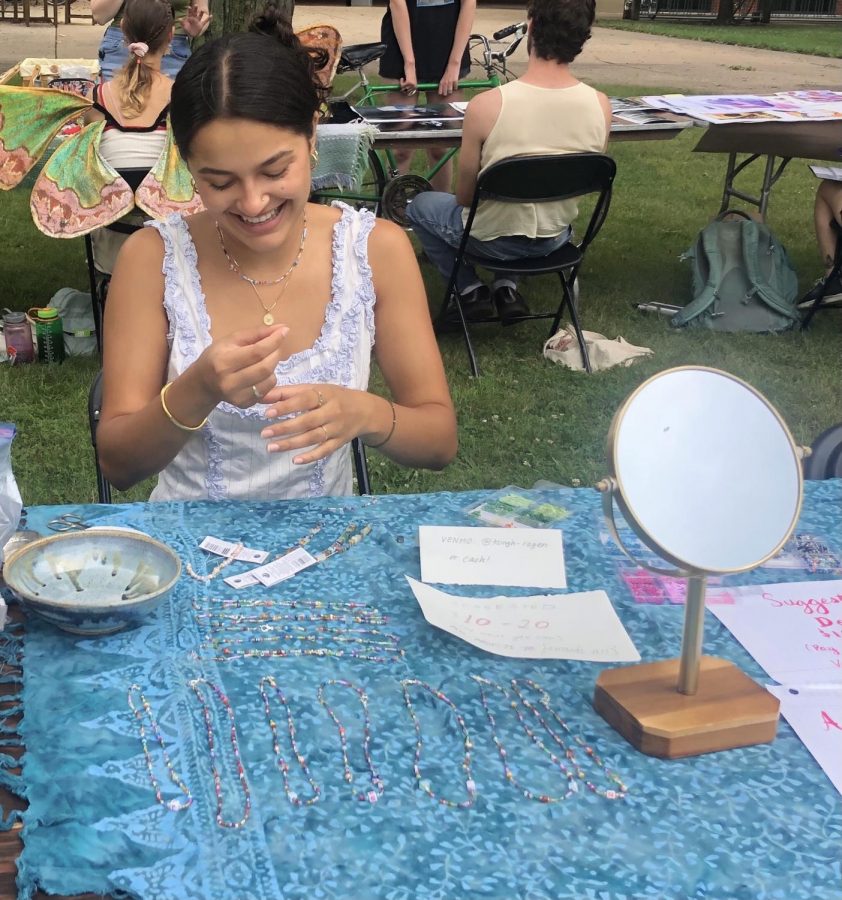 Last weekend, Maker’s Market in the Science Center Bowl hosted an array of students’ artistic works. Tables lined the grass in the Science Center Bowl, each one showcasing the time and care Obies dedicate to their crafts. The event was an opportunity for students to sell their work to the Oberlin community, and for the community to support and engage with student art in return.

Rather than arranging the tables in rows, the artists’ stations formed a giant rectangle with patrons flocking toward whatever collection of work caught their eye. College second-year Dora Neiden appreciated the relaxed flow of traffic from behind her table, and likened the whole affair to birds of prey marveling over a communal feast.

“People were just kind of surveying and circling, like vultures do,” Neidan said. “They’re just looking for something and then they’ll zero in. You really did get to see people’s eyes just being caught. And the really fun thing was when people were about to walk past, and then look at your stuff and stop.”

Neidan’s table was laden with her handmade hefty and intricately-wrought silver jewelry. Neidan isn’t just a silversmith, she practices a meticulous and timely process called lost-wax casting, wherein she uses an exacto knife and a miniscule carving tool to render models of her designs in wax, incases the wax in insulation and melts it down to a mold, and then pours in molten silver to create her pieces. Once in rough form, pieces still need to be buffed, polished, and finished. The process is time-consuming and costly, but it marries a slew of Neidan’s foremost passions — sculpture, jewelry, mathematical planning, and high-stakes situations. A body of work this resource- and labor- intensive doesn’t sell for cheap. Neidan had only ever sold commissions prior to Maker’s Market, and didn’t think customers were going to bite.

“I was worried that I would go and that people would see my stuff, but wouldn’t understand what went into it and demean it,” Neidan said. “I thought that it wouldn’t make any sales.”

By the end of the market, Neidan had sold 14 pieces — a huge chunk of her display.

The Maker Market was an opportunity for many student artists to interface with customers for the first time. College second-year Tesia Singh-Ragen fosters a life-long passion for drawing and painting, and came into the Makers Market with some prior experience selling her work — during the height of the 2020 Black Lives Matter protests. Singh-Ragene collaborated with College second-year Atticus Kaplan to raise money for the Audrey Lorde foundation, drawing a design for him to screen-print on t-shirts. After just finishing up a large embroidered tapestry for Professor Johnny Coleman’s Studio Art and Africana Studies course Something from Something, Singh-Ragene was inspired to try something new

“I had all these beads leftover,” Singh-Ragen said. “So I just thought it’d be fun to make a necklace. I had never sold jewelry or any sort of beaded work. That was definitely a first.”

Once Singh-Ragen began making necklaces, her friends started to request their own. She obliged, fashioning bright arrangements of beads around their recipient’s first initial, and decided to offer commissions on social media. She was met with immediate success, so when a friend clued her into the upcoming Ma

kers Market, she thought ‘Why not?’ The necklaces cost very little to make, so she decided to leave pricing up to her customers.

“Venmo made it so easy for people to come and pay what they could and have it be a sliding scale,” she said. “I’m figuring out how to distribute what I made, but I wanted it all to go to mutual aid. So it’s just nice that I can have that money in that platform and be able to just send it elsewhere. … I was more asking people, I guess, to pay for the time, the work that I put into making them. But [the beads] weren’t very valuable in and of themselves.”

Similarly to Singh-Ragen, college third-year Lila Tamblyn took the Makers Market as an opportunity to try their hand at a new design. They have been crocheting since they were 4 years old and love that the medium is portable and casual, producing items that have a use, like a “cool hat.” For Maker’s Market, they decided to debut a signature design, the ‘surprise mushroom.’ These are delightful creatures whose caps pop up to reveal little smiling faces. Similarly to Neidan, Tamblyn was surprised by their table’s success.

“I sold out actually pretty quickly, which I had been really scared about,” they said. “I was like, no one’s going to want these stupid mushrooms. And then they went in like half an hour.”

Despite the high demand, Tamblyn doesn’t have any plans to market their work any further. For them, assigning cost to their craft takes away all the fun.

“I know that if I try to monetize this, it’s going to stop being fun,” they said. “I’d much rather have fun with it than make some money … if I’m doing this for money, which is something I already know would stress me out, I’m not gonna do it for less than it’s worth. That’s why I don’t think I’m going to really be selling stuff seriously anytime soon.”

But that’s not to say they don’t want you to check out their knitwear inventions — you can catch a very satisfying video of the surprise mushrooms on their instagram crochet account @yarnbarnacle. Neidan is in the process of taking their work online as well, but in the form of an online shop. It’s still in the works, but already boasts a selection of rings and pendants resting on some very nice moss.