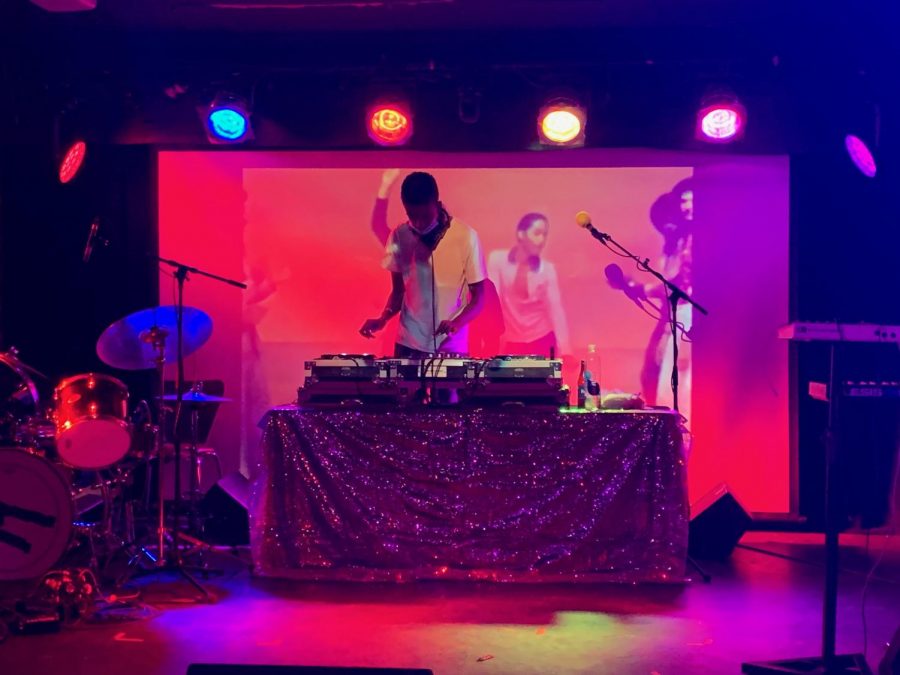 On Aug. 6 and 7 the ’Sco hosted a two-day experimental music festival, marking the first in-person, masks-up concert of non-student performers in the venue’s history.

Last weekend the Dionysus Disco hosted its first ever Angel Ultra Fest, a two-day music festival featuring nine experimental, hip-hop, R&B artists, and house DJs. Artists included DJ Macro, SiDAKA, Tama Gucci, Staysie Atoms, Blake Saint David, Sydfalls, TWEAKS, baby.com, and Yesterdayneverhappened — the venue’s first lineup from outside of Oberlin in an in-person concert series since March 2020. Angel Ultra Fest was the brainchild of College third-year Courtney Brown, and the festival featured performances at both the ’Sco and afterparties at student houses, featuring a dizzyingly talented roster of performers from all over the country.

Brown wanted the ’Sco’s first show back to be memorable, so they introduced the idea of a festival, saying they were inspired to reach out to all artists on their own.

“I do have co-workers at the ’Sco,” Brown said. “But this was kind of just my festival, my project.”

Brown is from Chicago, and they decided they wanted part of the event’s lineup to hail from their hometown.

“I knew two of the artists already, and I really like their music,” Brown said. “The other two [from Chicago] I didn’t know personally, but I’ve liked their music for a long time. I would definitely say they are some of my favorite artists at the moment.”

SID, the lead rapper of the Chicago-based hip-hop jazz band SiDAKA, reflected on how rare it felt to participate in a lineup like the one at Angel Ultra Fest, especially with COVID-19 back on the rise.

“It felt amazing to be surrounded by that many artists, me being who I am and [them] who they are,” SID said. “And to see the world right now — it kind of made me look around and appreciate this moment that was going on. To see a lot of smiling faces, people dancing, I felt so grateful to be there. Courtney did an amazing job.”

Memphis rapper Staysie Atoms, who played an hour-long set for the first time in her career, greatly enjoyed the Oberlin campus atmosphere.

“The environment and the vibe were unreal,” she said. “Oberlin is like the 2000s college campus of my dreams.”

Though both artists enjoyed themselves, they did feel constrained by their masks, which were required following the College’s reinstatement of the indoor mask mandate.

“The mask does take away from the visual representation of who we are and how I’m performing certain songs,” SID said. “That’s part of our music, you know? It’s harder to connect with people. Our bassist Jackson, he makes these jazz stank faces, and we want the audience to see those super crucial facial expressions.”

Atoms also found that her mask stunted her ability to connect with the audience; it shortchanged the physicality of her performance.

“It’s just hard to keep that stamina, because I want to show my face and look people in the eyes and get them to really flow with me,” she said. “It was hard to keep my breath, so I just felt a little distracted.”

“[Masking] was definitely a big boundary,” they said. “I feel like a lot of students didn’t come. I think that it was a barrier.”

College third-year Joaquim Stevenson-Rodriguez both helped organize the festival and also performed with Oberlin alumnum DJ Macro at one of the afterparties. He said that it’s hard to determine how masking impacted turnout as this was the ’Sco’s first concert since last spring; there isn’t really a norm to compare it to.

“I still thought there was great turnout, but I was a little surprised at how few people came to the actual shows,” he said. “The afterparties were much bigger but definitely a different crowd. I think masks were a part of that.”

Unfortunate as the mask mandate’s timing may have been, both Brown and Stevenson-Rodriguez were very pleased with Angel Ultra Fest’s energetic atmosphere and genre-bending lineup.

“People seemed to have a really great time,” Brown said. “I had people come up to me the day after and say they really enjoyed it. Everything went according to plan, and all the performances were really good. I know a lot of the artists prepared new songs specifically for this show, and all of them were so interactive with the audience.”

For Stevenson-Rodriguez, the thrill of the event was in the music and technical skill exhibited by many of the performers.

“Honestly, it was so good,” Stevenson-Rodriguez said. “It was just one amazing set after another. Each one was so different, but they all worked very well together. It was electrical out of the trunk stuff and then hip-hop and then some funky stuff. My mind was totally blown by all the mixing, their transitions — just insane stuff.”

Similarly to Stevenson-Rodriguez, SID left the festival with a deep respect for his fellow headliners and an appreciation for the work put into the lineup’s realization.

“I don’t know how many times I can say it, but that was such a good group of artists,” SID said. “I mean, the diversity of DJs along with the singers and our band. I don’t know; it ain’t easy. It ain’t easy bringing this lineup together. It was just really cool; Courtney was amazing.”