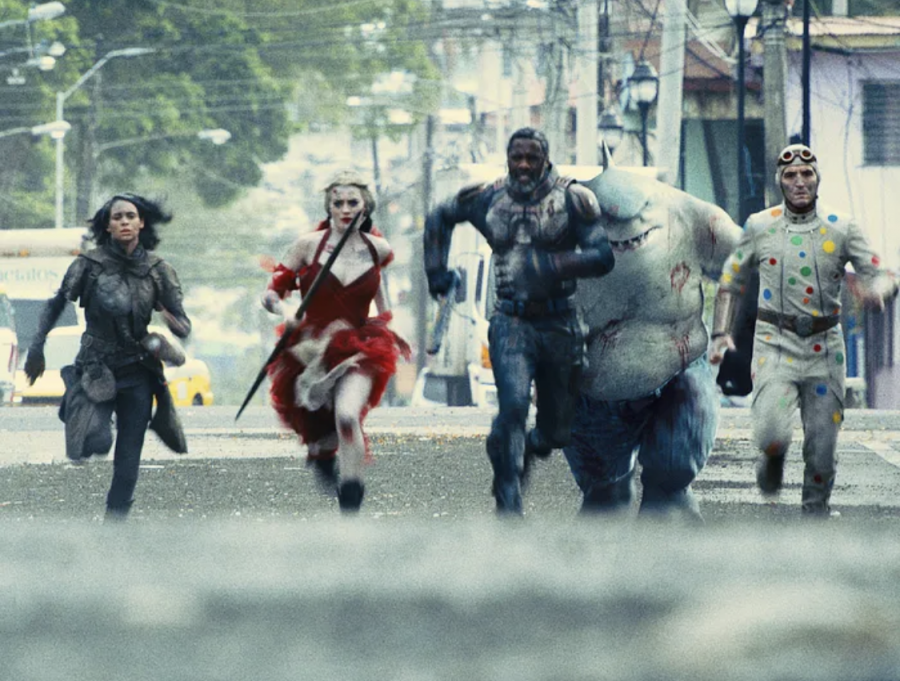 James Gunn really just rammed through the gates of the superhero genre with a spectacular explosion of death and crassness. Indubitably the showstopper of the summer, The Suicide Squad (2021) sheds the botched legacy of the Frankenstein’s monster that was David Ayer’s Suicide Squad (2016) and launches into the upper echelon of superhero film history.

Set sometime after the events of Birds of Prey (2020), actors Margot Robbie, Joel Kinnaman, and Jai Courtney return to team up with iconic newcomers Idris Elba, John Cena, Daniela Melchior, Sylvester Stallone, and David Dastmalchian. This ensemble cast of supervillains go on to comprise Viola Davis’ “Task Force X,” and so ensues an explosive plot best left undivulged. What I will say: expect anything physically possible and nothing remotely predictable.

Gripping as it was, The Suicide Squad’s plot was never going to be the flim’s selling point, and writer and director Gunn knew it. Having assessed audience expectation, Gunn made the right decision and fashioned a plot to compliment the range of talent at his disposal. From a lineup of thrilling performances, Robbie still manages to own the show. This being her third appearance as Harley Quinn, Margot is the only actor in the DC Extended Universe to receive unremitting praise for multiple performances. Elba, as Bloodsport, delivers a masterclass in dramatic range,  grounding the film with an emotional core and creating a gravity around his performance, while still hitting a brilliant comedic balance.

In a cast of actors as acclaimed and versatile as Robbie and Elba, I was apprehensive about one actor: John Cena, whose most recent performance in F9 (2021) fell flatter than the landscape of Ohio. Fortunately, much like Dwayne Johnson and Dave Bautista before him, Cena’s transition from championship wrestling to acting works best in comedic roles. Sure, his sheer bulk makes him a believable action hero, but his monotone and entirely unironic style both work and made for an enjoyable performance for the first time in his acting career. I am genuinely excited for the solo series that is expected to build on his character, Peacemaker, expected for release on HBOMax by January 2022.

Apart from the stand-out and surprising performances, one character brought me unparalleled joy: King Shark, voiced by Stallone. Gunn has perfected the art of rendering characters with minimum dialogue and maximum lovability, and though this tactic could have run the risk of likening King Shark to an amphibious Groot, Shark is an unhinged and hungry monster, and we love him for it. One may not expect top-tier acting from a giant CGI-anthropomorphized shark, but Stallone voices the character with heart and a few choice shots by Gunn bestow Shark with unexpected humanity.

A tried and true franchise builder, Gunn is no stranger to directing ensemble casts. Warner Bros. Pictures obviously placed a lot of trust in him for it, evidenced by a number of very risky creative decisions. While comic book adaptations have had plenty of R-rated entries in the past, they haven’t been much more explicit than mature films in general. The Suicide Squad isn’t just more of everything — it’s unprecedented and unnerving at times, redrawing the expected limits of on-screen violence and creative language. To put it in context, Game of Thrones with all its skull popping shies in comparison. The extremities may be alienating for some audiences, but if you’re game for some gore, it’ll be worth your while.

Blood and guts aside, the film has one pervasive weakness: its pacing. It begins in a whirlwind of action and exposition, and with the  crackling humor and early plot-twists, things may be overwhelming. That said, the frenzied chaos did constitute one of the best opening acts I’ve seen in film . A little further along in the runtime, the plot slows to a grinding halt, making way for longer comedic bits and action scenes,  but often veering into the over-long and, frankly, gratuitous. By the start of the third act, the plot has run dry. Though some shock-factor is still maintained, the story itself becomes clunky and stretched. At its worst, the film entirely pulls away from the urgency of the action in favor of purely filler scenes, and while these still entertain, the film could simply have done without.

Flaws and all, we finally got The Suicide Squad we wanted in the first place. It entertains, provokes, questions, and narrates — and it does it well. It still succumbs to the  bane of comic book films continuously setting up an infinite universe of sequels, I really don’t mind. Give me more content with any one of these characters, and put James Gunn behind the production somewhere, because this blend of spices worked.

The Suicide Squad is showing in the Apollo Theatre right now, and if you’re not comfortable with a theater, get yourself an HBOMax trial subscription just for this film. If you can, watch it in an IMAX theatre, because it was shot entirely on IMAX-certified RED cameras and to view its epic scale in its intended form is a beautiful thing. However you choose to watch it, go into this experience knowing you need no prior context, no necessary love for comic book adaptations, and even with immensely high expectations — prepare to be blown away.