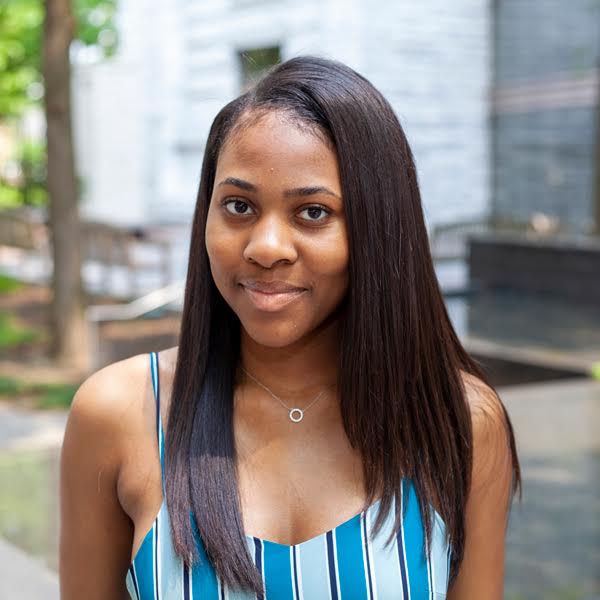 Underrepresentation of people of color in science, technology, engineering, and math fields has been a persistent issue all over the world. Oberlin is addressing this problem by encouraging students from historically underrepresented groups to become more involved in STEM through the Science and Technology Research Opportunities for New Generation program, now in its sixth year. STRONG is made up of both a learning community and the Roots in STEM residential community. We sat down with a STRONG faculty mentor, Leslie Kwakye; an alumnus of the program, Marcus Hill; and a current participant, Tosh Phoenix; all of whom are making strides in their respective research fields.

These interviews have been edited for length and clarity.

Leslie Kwakye, OC ’06, is an associate professor of Neuroscience and director of the Office of Undergraduate Research, conducts research in multisensory integration and is actively involved with STRONG as a faculty advisor. She places a particular importance on the mentorship component of STEM.

What was the original initiative for STRONG, and where is it headed now?

STRONG is in a little bit of a transition right now. It was initially created as a summer research program, which brings students in the summer before they start college for a one-month long research experience with a research mentor in STEM, and then they would live together their first year. What we’re doing now is transitioning STRONG to be more of a customized first-year experience.

We’re still bringing in students a little bit early — just one week early — and this year they won’t be doing research in that time. It’s more like an on-campus get-to-know-each-other and start building some of these soft skills for being successful in college: What are optimal study habits? What are good test-taking habits? Things that shouldn’t make somebody more or less successful in STEM, but they do. Then they’re in a first-year seminar together, and they’re in the same Pell Grant program together and living together to really try and focus on adapting to college. Then they would still do research, but for Winter Term rather than the summer.

What do you hope for the future of STRONG?

Right now we’re looking for funding to make STRONG not just a first-year experience, but a whole four-year experience. My dream for STRONG is to have students who are very confident in their ability to be scientists feel reasonably comfortable in STEM. Give them the confidence and leadership abilities to go into their STEM career paths, to go in as a leader who has the ability and the will to change them and make it better for everybody.

I love STRONG students; they’re my babies. I try to have a family environment, where people feel comfortable with everybody. There are 16 students a year now, so that will be a very sizable family.

Marcus Hill, OC ’19, was a Geology major at Oberlin. Throughout his four years, Hill was able to conduct research both at Oberlin and abroad. After graduating, he was an AmeriCorps fellow involved in K-12 STEM education programs. Now a Howard Hughes Medical Institute Inclusive Excellence Fellow, Hill is working to help lead a departmental effort to promote equity in STEM at Oberlin.

What was the Roots in STEM residential component of STRONG like for you?

The residential experience was one of the most important aspects of the whole program for me. I became friends with the members of my cohort while we were living together over the summer, and that bond easily transferred to living together in Price House — Third World program housing — during the academic year. It made the transition from high school to college so much less intimidating knowing I had nine other friends already in my hall.

What role has mentorship played for you, both as a student and a scientist?

My mentors from STRONG, Professor of Geology Amanda Schmidt and former Assistant Dean of Undergraduate Research and Assistant Professor of Comparative American Studies Afia Ofori-Mensa, have helped and continue to help me in ways I am still discovering. As a student, they both encouraged me to take full advantage of the liberal arts aspect of Oberlin College. As a STEM major who was on the track to go to grad school, it felt like, if I didn’t plan my courses just right, then I couldn’t be successful post-Oberlin, and that’s just not true. Both mentors highlighted the fact that a crucial aspect of being a scientist is being able to communicate your work to broad audiences. That means taking classes in the arts and humanities and more than just STEM.

How has STRONG shaped your interests and career pursuits beyond Oberlin?

Doing research for four years was so fundamental for me as an Oberlin student, but also in thinking about next steps and where I wanted to go. That research experience showed me that the lab setting wasn’t fulfilling to me if I don’t also have the ability to communicate the work to the communities it’s impacting. Knowing that, I’ve been chosen to pursue more science communication positions like in the National Parks Service and prospects like the HHMI STEM Fellow, which allow me to connect science and people in a way that feels good. If I wasn’t in STRONG, I’m not sure I would have considered this path or have found it so early.

College second-year Tosh Phoenix, originally from the Cleveland area, is a prospective Neuroscience major and Chemistry minor on the pre-med track with an Education Studies concentration. She is a member of the American Medical Student Association, a Bonner Scholar, and a Center for Learning, Education and Research in the Sciences coordinator. After college, she hopes to become a developmental behavioral pediatrician to work with children who have ADHD and other learning disabilities.

How did you become interested in neuroscience, and how did the STRONG program help you pursue that passion?

I knew I would do something different than what most of the people in my family do. I was just really fascinated with the brain and how complex it is and also how I can study the brain relative to marginalized identities, particularly Black people: Black children, Black girls, Black women.

As a STRONG scholar, I conducted research with Assistant Professor of Psychology Travis Wilson back in 2019, focusing on adolescent and child development within minority groups. It was five weeks long. That program was so amazing. I was able to do research as a pre-first-year student.

What role have your peers and mentors played during your time at Oberlin?

Beyond my research with him, Professor Wilson is such a great mentor. He’s helped me a lot. In STRONG I met some of my now-best friends. In that program we also did a variety of reflections. One of my favorite ones was thinking about what we value most. That helped me a lot through my first year, coming to Oberlin terrified. Because of STRONG, I had a boost of confidence, knowing that, “Okay, I’ve been on campus, I know a lot of departments, I have friends, I got this.”

How did STRONG help you meet the challenges entering Oberlin as a Black woman in STEM?

I didn’t even realize I had imposter syndrome until the end of my first semester here. I was just working hard, studying all the time. But once I realized I had it, it was a matter of reflecting. Once again, I came in feeling pretty confident, given my STRONG experience. I’m already a hard worker by nature, but I was going hard. I was trying to prove that I could do well. STRONG definitely contributes to that initiative; it’s the only College-based thing that I could think of that made students of color and students from marginalized backgrounds feel more comfortable in STEM here.