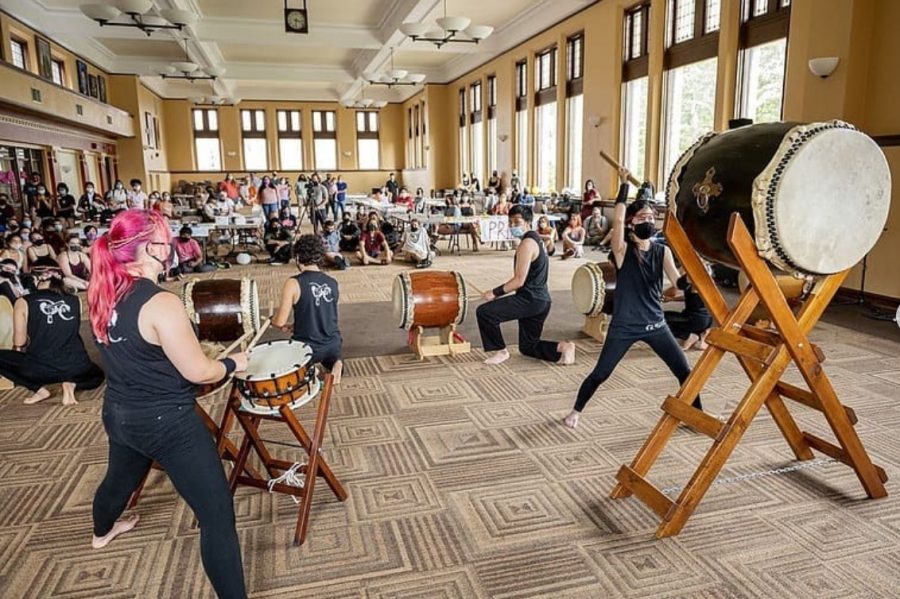 Last weekend’s student-organized natsu matsuri was originally planned to take place in the Science Center Bowl, but its location was moved to the Root Room due to a forecast of rain.

Oberlin held its first ever natsu matsuri in the Root Room on Saturday, Aug. 7. Natsu matsuri, which translates to “summer festival,” are held by Japanese and Japanese-American communities in the late summer. They originated in urban communities that would hold memorial services for the people who died in an epidemic in the summer before the Edo Period. Modern natsu matsuri are a cultural celebration — a chance for communities to come together, partake in a variety of food and entertainment, and observe cultural traditions. The festivals are a highly anticipated source of joy and cultural unity for many members of the Asian and Asian American community. So when Oberlin decided to hold a summer semester, Taylor Ingman, OC ’21, and College third-year Sarah Wong got to reminiscing on celebrating natsu matsuri at home. Neither of them had attended a festival since before COVID-19 and they bonded over how sorely they were going to miss it. Then, one of them had an idea to bring natsu matsuri to Oberlin. Wong filled  her close friend College third-year Ryo Adachi in on the plan, and the Oberlin natsu matsuri event planning committee was born.

“We wanted an event where we could be unapologetically API and share our talent and cultural pride with Oberlin,” Wong wrote in a message to the Review. “Taylor, Ryo, and I have all been away from home for a while, and we were all feeling homesick. Instead of going home, we decided to bring one aspect of home to Ohio. We thought hard about games and food we enjoyed and tried to replicate them here with the resources that we had.”

In order to implement their vision, the three organizers needed both financial and institutional support. Fortunately, each of them are involved in campus organizations that came especially in handy — Wong is a member of Oberlin College Taiko and she currently works as Program Assistant at the Multicultural Resource Center. Adachi is a part of the Japanese Student Association and works with the Peer Advising Leadership program. Ingman participates in both JSA and OCT, along with having connections to the East Asian Studies department that she utilized in leveraging the event. In the end, the festival was truly a group effort, with funding and institutional support from the Multicultural Resource Center and Oberlin Shansi, collaboration between OCT and the JSA, and additional support from PAL’s Camp Obie program.

Though securing backing from so many different organizations was hugely beneficial in the festival’s realization, Wong’s personal highlight was getting to work with her friends.

“Technically, the three of us were representing multiple organizations that we were part of when planning the event, but it felt more like three good friends coming together to organize a fun event than anything else,” she wrote. “My favorite part of the organizing was definitely when Taylor, Ryo, and I spent a lot of time together preparing banners and games for the festival. We had a blast while chatting, painting banners, folding origami, and testing festival games.”

Wong hails from a largely Asian-American community in the San Gabriel Valley in Los Angeles, so her experience of Japanese-American and Asian-American cultural celebrations is largely sourced from home. She appreciated guidance from Adachi, who has organizational experience under her belt — she acted as an organizer for Asia Night Market in 2018 and 2019.

“Ryo has a lot of organizing knowledge through her work with Asia Night Market, so we followed a number of her suggestions,” Wong wrote. “In particular, we decided to order food from Shinano, the only Japanese-owned Japanese restaurant in the Cleveland area, for the event. In general, Oberlin doesn’t have that many Asian-American cultural celebrations.”

Beyond her experience organizing events at Oberlin, Adachi was involved in many natsu matsuri while living in Japan.

“When I lived in Japan, I went to many 夏祭り (natsu matsuri) every summer,” she wrote. “It was part of life. I’ve helped with different booths, performed with my school band. … It was always a chance for people in that neighborhood to come together and enjoy.”

Similarly to both Wong and Adachi, Ingman traces their relationship with natsu matsuris back to home and childhood.

“I grew up attending matsuris with my family back home in Los Angeles,” they wrote. “Our (Buddhist) temple has a two-day festival every summer. We typically go every year, with the exception of this year and last year due to COVID[-19]. My favorite part of these festivals are the sense of community; it seems like my mom is always running into someone she knows from high school at our temple.”

Ingam’s main goal in organizing the event was to share this sense of community with Oberlin.

“I wanted to bring the unique experience of attending a matsuri to Oberlin because going to these festivals every summer was such a memorable part of my childhood,” they wrote. “We wanted to create a space that prioritized API identities but was ultimately open to everyone.”

Even though the forecast’s threat of rain ran a small interference, the three organizers kept on their feet and changed the festival’s location from the Science Center Bowl to the Root Room. With a set of clear and shared intentions, a network of support behind them, and an exceedingly positive working relationship between them, it is no surprise that they found their event met with great success.

“I was surprised and happy at the number of attendees we got, considering that we had to change to our rain location the day before,” Wong wrote. “I was also super happy to see not just students, but also staff, faculty, and members of the Oberlin community and their families show up to the event. One of the younger kids who came asked to see our taiko drums and the whole interaction was so cute… [and] Ryo and I saw a double rainbow as we were finishing cleaning up the festival! I thought it was a nice end to the natsu matsuri.”