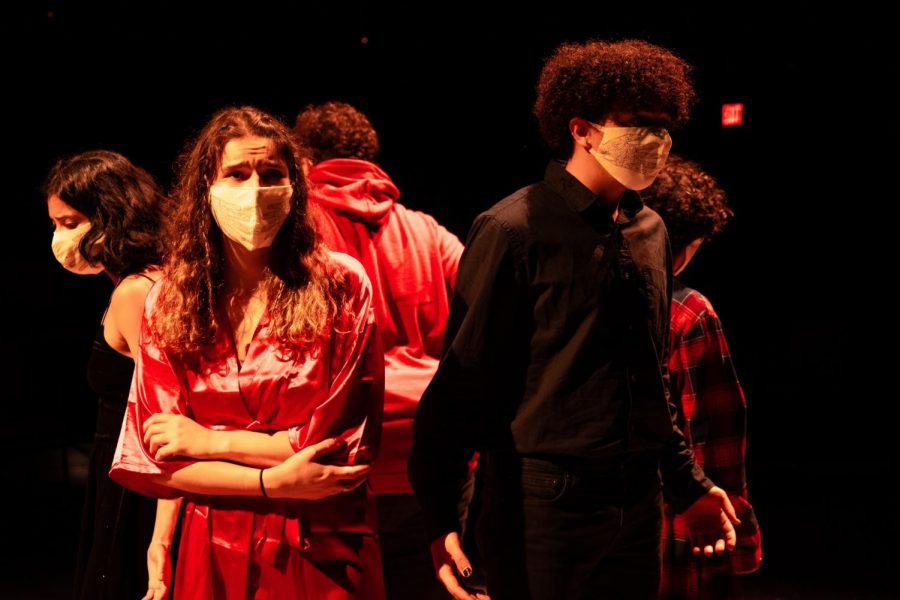 Student-directed play Let Them Eat Chaos will be showing in the Irene and Alan Wurtzel Theater this Saturday and Sunday.

This weekend, the Irene and Alan Wurtzel Theater will host a production of Let Them Eat Chaos, welcoming audiences for an in-person and student-directed play for the second time since the onset of the pandemic. Directed by College third-year Cyril Amanfo, the play is based on Kate Tempest’s genre-bending album of the same name. The dialogue and plot follow the long-form poetic style of Tempest’s original work and recount the story of five London residents who all find themselves awake at 4:18 in the morning. Through small vignettes, the audience looks directly into the characters’ lives, each one marred by varying degrees of loneliness, addiction, disenfranchisement, and hopelessness. In the following scenes, a great storm breaks out over London and the characters are forced to come face to face as they are given a final opportunity to confront each other and themselves.

In a global climate framed by realities including, but not limited to, the COVID-19 pandemic, police brutality, and environmental crises, Amanfo believes Tempest’s work urges us to challenge the myth of the individual and the harm it has done to our collective consciousness. It asks us to reach out for one another in times of need and recognize what we lose when we surrender to the chaos both inside and around us.

“[The point of the play] is to recognize that everybody has their own wars and battles going on inside their own head all the time,” said Amanfo. “Especially having been home for 10 months straight during the pandemic, it’s so easy to only think about ourselves, to say ‘I’m bored’ or ‘I’m tired of this’ when millions of people are dying worldwide. This show is about these five people who are so focused on themselves that it’s hard to see the chaos that’s happening around them. Our world is so chaotic, and if you focus on everything for too long, you’ll drive yourself insane. But also if you focus on nothing but yourself for too long, you’re just completely out of touch.”

College third-year Ellie Marcus will be playing Gemma, a struggling ketamine user at odds with herself and who is thrust into despair. She begins the show with: “It might be fun / just for a while, / to go back where / my hurt is from. / And rinse myself / to emptiness / and push / my body close. / To anybody / that can recognise / the presence / of my ghosts.”

Marcus says that when she first read those lines, they struck a chord close to home.

“I felt like I was being called out,” Marcus said. “Gemma is doing the classic thing that we’ve all done, thinking back on [your] past and everything that you’ve done. She’s mental spiraling a little, and that’s applicable to everyone in the audience.”

The show’s plot experiences a turning point when the storm hits, a moment Marcus views as a particularly opportune natural disaster.

“Each of the characters is so focused on themselves that they can’t see anything or anyone else,” Marcus said. “And then, when the storm happens, it’s a huge wake-up call for them. It’s like the natural world saying, ‘Something really needs to change here.’” ​​

When asked what she wants audiences to take away from the performance, College third-year Aesha Mokashi, who will voice the role of single mother Alicia, echoed her castmates’ goals.

“Most want audiences to leave feeling energized and appreciative of human connection,” she said.

Mokashi’s character is struggling with the recent loss of her husband to an act of police brutality.

“She’s feeling very lonely and desperately wants to make a connection with somebody —  anybody,” Mokashi said. “But she’s really struggling because she feels so alone.”

To Mokashi, Amanfo, and Marcus, the play is about people coming back to each other. Underlying the trials and tribulations of each of the characters, the play’s emphasis lies in the vitality of community. For all three, the excitement leading up to opening night is palpable — particularly because it will be their first in-person performance since last March.

With opening night just a few days away, Amanfo took a moment to recall the limitations of directing during a pandemic. “I directed on Zoom a little bit throughout the pandemic and, as much as I enjoyed it, it’s just not the same,” he said. “So much of doing a full-length show is taking and giving energy from each other. And we rely on the energy that’s given by the rest of the actors, by the audience, by the director, all those things, and that’s hard to translate over screens.”

The struggles of adapting directorial work to Zoom have deepened Amanfo’s zeal for putting on a production in full swing.

“This past year has made me realize how special it all is.” he said. “We were gone for a year and a half, and to be back, especially to be back with this show and this cast, I just feel really grateful.”