Food, Community, and Black Joy: The Legacy of Black Agriculture in Cleveland 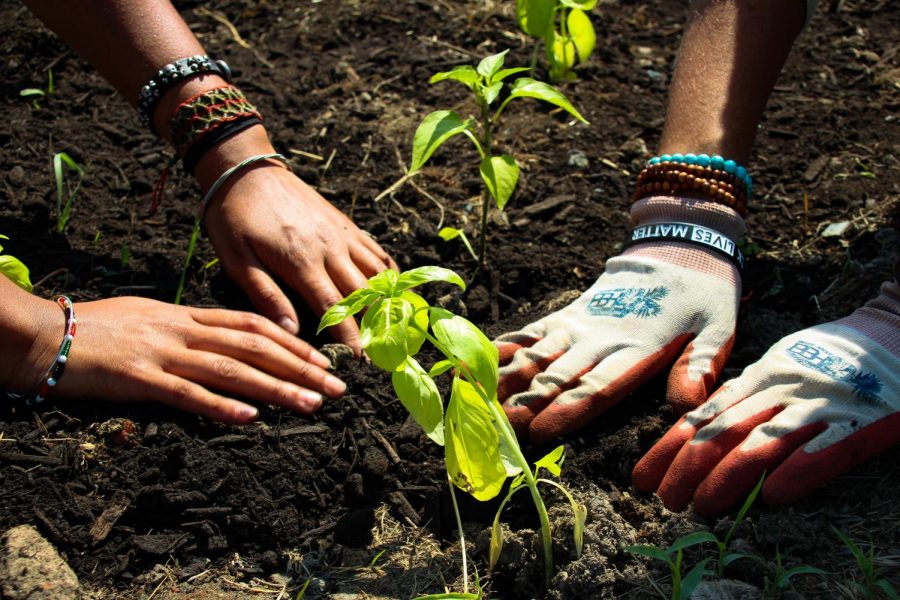 Photo by Rachel Serna-Brown. The hands of Vera Grace Menafee and Imani Badillo in the soil of Vel’s Purple Oasis.

During his speech, “Message to the Grassroots Movement,” Malcolm X declared, “Revolution is based on land. Land is the basis of all independence. Land is the basis of freedom, justice, and equality.” The reality that we live in today has been built upon a history of genocide, exploitation, and displacement. For the descendants of enslaved Africans, tending to the land is intrinsically tied to the history of chattel slavery in the United States and the plantation economy that is the backbone of this country.

While this painful history of land dispossession and discrimination against Black farmers exists, there is an even stronger history of how these communities have resisted endless forms of oppression by maintaining their connection to the land and honoring ancestral knowledge. Throughout the 20th century, Black communities in the South formed “land trusts” and cooperatives, like Fannie Lou Hamer’s Freedom Farm, to combine their resources and become economically, politically, and socially independent from the American white supremacist state. These farms were extremely important to the Black freedom movement, as many Black-owned farms provided food and housing for activists while also putting together campaigns for voting rights and desegregation.

This community responsibility has strong and deep roots throughout Black and Indigenous communities and has been carried out by elders and their descendants for centuries up through the present day. During what is called the Great Migration, recently freed Black people in the South migrated to northern urban centers throughout the 20th century to escape Jim Crow laws, job discrimination, and rising acts of white supremacist violence, carrying with them their deep agricultural knowledge. Urban farming organizations rooted in Black agricultural wisdom carry on this history of beautiful resistance. Some of the ones in the Cleveland area guiding the way are Vel’s Purple Oasis and Chateau Hough.

Vel’s Purple Oasis, based near University Circle, was founded by Ms. Vel Scott and her husband Don Scott in 2008. A former owner of the nightclub Vel’s on the Circle, Ms. Vel is a well-known elder in Cleveland; in our experience at her garden, Ms. Vel always offers a warm hug, food or produce, and a great conversation. Since 2019, her garden has grown immensely. The advice she has passed on and the community that has formed around her is so vibrant and beautiful. In addition to growing, Vel Scott offers cooking classes at the nearby Don Scott House, which rests across the street from the garden. Here, individuals are given the opportunity to cook with high-quality fruits and vegetables not normally accessible to the community while also addressing the high rates of diabetes and heart disease in the area.

The work that Ms. Vel and many other community gardens are doing directly combats food apartheid. Food apartheid is distinct from a “food desert,” which defines a place where car access is required to shop at the nearest grocery store or supermarket or where produce remains expensive and low-quality. In contrast, food apartheid recognizes the intentional segregation between predominantly white communities with high-end grocery stores and Black, Brown, and low-income communities that are separated from much-needed nourishment. Ms. Vel connects so many individuals and communities together with her presence, her Oasis, and her love for food and people.

Also based in Cleveland is the vineyard and winery Chateau Hough. Created by Mansfield Frazier in 2010, Chateau Hough rests on three formerly vacant lots. Frazier’s intent in creating this vineyard was to give formerly incarcerated individuals a stable place to work and gain experience. The winery and vineyard is located in the Hough neighborhood, historically known for the Hough Uprisings of 1966 that brought attention to many forms of racism in Cleveland, including segregation, economic inequality, and redlining. Chateau Hough works to introduce a wider audience to the Hough community and actively combats stereotypes of violence and danger in this neighborhood. Mansfield Frazier is another Cleveland elder supporting his community through growing, and he remains dedicated to generating paychecks to individuals that are given no other support in the economic system.

Connection to land is essential to the liberation movement. Much of U.S. history recognizes and details the ways in which agriculture has been weaponized against Black people. In order for communities to be self-sufficient, they must reconnect with ancestral land practices and combat this historical violence. While land ownership remains directly related to settler colonialism and the displacement and genocide of Black and Indigenous people, forming and maintaining the relationship that one has to the environment and to farming allows individuals to understand that one’s knowledge and contribution is valuable, important, and a part of revolution.

The knowledge that we cannot return to freedom without the land is the basis for Soul Fire Farm in upstate New York. By using ancestral Black and Indigenous growing practices, Leah Penniman has created a community space for individuals and farmers to learn about sustainable agriculture, ask questions, and to start and maintain their own self-sufficient farms and gardens. Penniman’s work has helped create a network of Black farmers that are using their own knowledge to reconnect with the Earth, achieve liberation on and with the land, and become connected with other farmers achieving the same goal. In Soul Fire Farm’s short lifetime, the soil has been able to reach pre-colonial levels of nutrition and oxygenation while also supporting many families and communities with its produce. Penniman’s book, Farming While Black, reflects on the meaning of growing, teaches new farmers how to successfully run their own farm, and includes a plethora of additional resources that allow individuals to clearly understand the logistical process of growing.

As Farming While Black illustrates, “Each one of us has innumerable ancestors who have endured suffering and emerged intact. Our ancestors are rooting for us, loving us, and attempting to share their wisdom with us. Our job is simply to listen.” As food apartheid and food justice become more widely discussed topics, it is important to learn from the elders in and around us that have been listening all this time.

Farming While Black: Soul Fire Farm’s Practical Guide to Liberation on the Land  by Leah Penniman

Rooted in the Earth: Reclaiming the African-American Environmental Heritage by Dianne D. Glave

Remnants: A Memoir of Spirit, Activism, and Mothering by Rosemarie Freeney Harding and Rachel Elizabeth Harding

To be a Water Protector by Winona LaDuke

Our History Is The Future by Nick Estes

As We Have Always Done by Leanne Betasamosake Simpson