Expansion of Sustainable Infrastructure to City Unclear as Project Continues 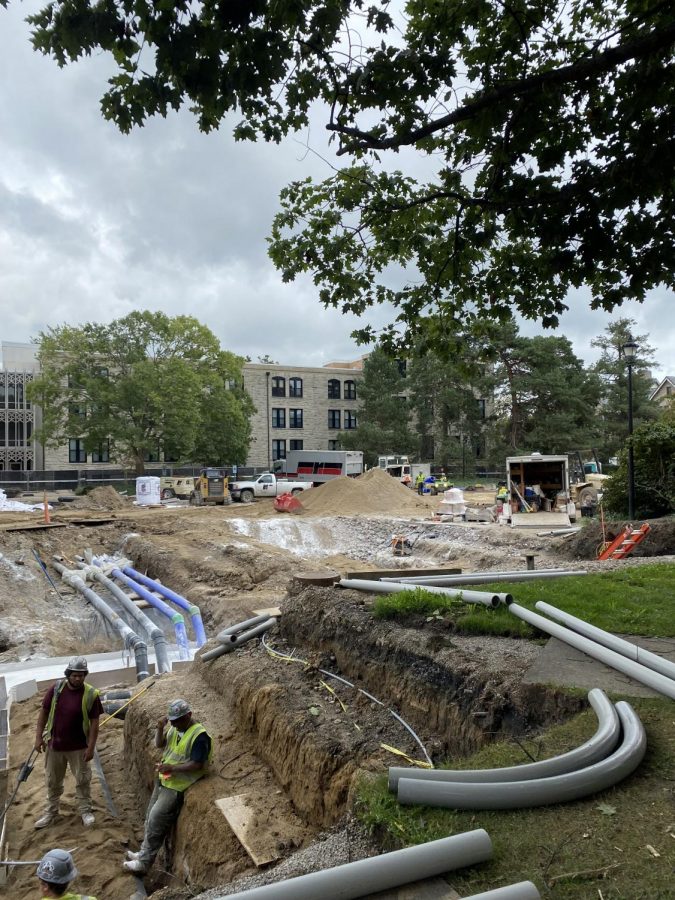 This summer, Oberlin College began work on the Sustainable Infrastructure Project, which will ultimately create geothermal wells to help move the College closer to its 2025 goal of carbon neutrality.

When the College launched the Sustainable Infrastructure Project, it advertised that the project would expand to include the broader City community, such as City government buildings, churches, public schools, and other community spaces. However, at this time, the College does not plan to broaden the project to include single-family residential buildings; instead, ground-source heat pumps will facilitate the exchange of geothermal energy between vertical wells under North Field and buildings around campus.

On April 19, Chief Facilities Officer Kevin Brown presented a progress update to Oberlin City Council about the SIP. He suggested that the project was designed to meet the needs of the whole Oberlin community, not just those of the College.

“It has always been our goal to work with the City and the community on this ambitious project,” Brown wrote in an email to the Review. “In particular, it reinforces the common goals and activities identified in our work together on the City of Oberlin Climate Action Plan. Not only are we neighbors, but we share the same environmental goals, for our region and for the planet. So we are very pleased to explore ways in which we might be able to expand this project to parts of the community. One way we could do that would be to expand the capacity of the geothermal well field, either by adding wells in the field or by placing additional wells in other locations that make engineering sense.”

Paul Sears Distinguished Professor of Environmental Studies and Biology John Petersen, OC ’88, explained that an expansion of the SIP is in the best interest of the College, which does not make full use of the system when students are home in the summer. According to Petersen, with the project’s thermal exchange process, running the system continuously boosts its efficiency.

Petersen says selling the excess heating or cooling to the City will enable the College to retain the carbon credit as a way to offset remaining greenhouse gas emissions. However, he expressed concern about the extent to which the community expansion of ground-source heat pumps will be financially beneficial for the City.

“The thing that concerns me is, originally, there was a lot of alignment between benefits to the City and benefits to the College,” he said. “I think they’re a little bit less aligned now with the way we’re doing it, and it’s no one’s fault, but back when we were [going to be] getting waste heat from the landfill, everyone was going to do well with the system.”

Petersen expressed disappointment that Energy Developments Limited, an energy company in Lorain that converts landfill gas into electric power, pulled out of talks about siphoning waste heat from the landfill gas plant. He says this would have created an economy of scale as the deal would have provided wholesale heating for the City as well as the College, while immediately achieving carbon neutrality for that sector. As it stands, ground-source heat pumps, and therefore the SIP, are only as carbon-neutral as the City’s electricity profile.

“We certainly can take this additional heat that we generate, and sell it to people in the City, but we’re paying for all of the electricity going into that,” Petersen said. “It’s paid for; there’s no waste that we’re taking advantage of.”

Still, the City boasts a relatively carbon-neutral electrical grid, with 85 percent renewable electricity generation, according to Sustainability Coordinator for the City of Oberlin Linda Arbogast. She says that while the City’s 2050 carbon neutrality goal is not as ambitious as the College’s, the whole community will benefit from the College’s SIP eventually. Ever-Green Energy, the organization in charge of implementing the SIP, has even worked to assess many community buildings, including Mercy Allen Hospital, Oberlin Public Library, City Hall, and Oberlin City Schools, at no cost to the City. The City has gone so far as to equip the new high school with a compatible ground-source heat pumps — projecting confidence about the College’s commitment to the community.

“First we have to determine what buildings would be added to the system,” Brown wrote. “Then we can conduct an engineering analysis of what the increased heat and cooling load would be. That would determine the increased capacity necessary to support the additional load.”

In particular, the cooling capabilities of this system may be increasingly beneficial to the City as the climate of Northeast Ohio continues to warm. This is a key point of the 2021 City of Oberlin Climate Vulnerability Assessment Report; even by the most conservative estimate, Oberlin is going to get far hotter in the next century.

According to the report, the number of days per year with temperatures reaching above 90 degrees Fahrenheit are projected to triple to an average of 30 days by 2030, contrasted with the 1950-2014 average of 10 days.

“None of this is easy,” Arbogast said. “But climate change is not going to be easy, it’s going to be really, really hard, and this is just the beginning of a lot of really hard decisions. And I think as a community, we need to find ways to be open to listening to each other and communicating, because it’s going to get harder. Even in Oberlin where we’re in a pretty good place geographically — we have water and things we have on our side — but there are things that are coming down the line that are going to get hard.”