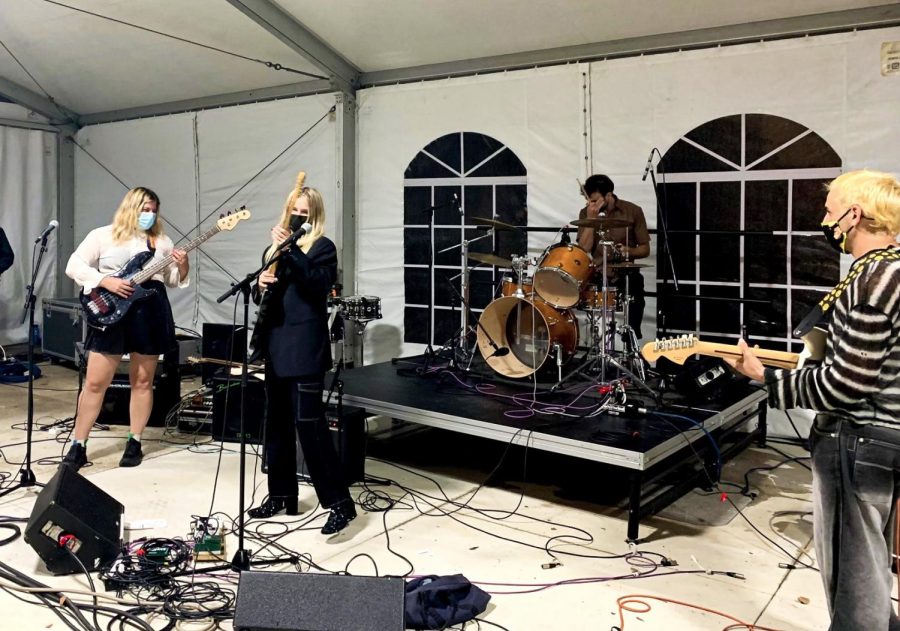 Dehd and Bnny perform for a crowded Wilder Bowl in the Cat in the Cream’s first concert of the fall semester.

According to College third-year and Cat in the Cream Booker Lola Chalmers-Dibbell, the event was originally supposed to be held inside the Cat but was moved to Wilder Bowl in order to decrease risk of COVID-19 transmission and comply with the new ObieSafe regulations. Even with the additional regulations, the concert brought excitement that the upcoming semester could provide students with a more typical college experience.

“It was definitely sad that we weren’t able to have the show in the Cat, but I think it was really nice to be able to have something like that in person,” said Chalmers-Dibbell. “There were a lot of people there and it was especially great to be able to have it during orientation, to show first-years the music scene and show them a good time.”

Chalmers-Dibbell feels proud that students could come together and enjoy some good music, especially because booking artists has not been easy over the last year and a half.

“It’s really hard to bring artists right now because we have to tell the artists that they have to wear masks onstage, which sometimes artists and the agents are not very responsive to … so I’m so happy we were able to bring Dehd and Bnny.”

This was the first show that Chalmers-Dibbell secured for the Cat, and she wanted to bring artists from Chicago, her hometown.

“When I first found Dehd [it was] many months ago [and] they were much smaller than they are now, so I wanted to help grow their exposure.” Chalmers-Dibbell said.

Hot off the release of their third studio album, Flower of Devotion, and a performance at the Pitchfork Music Festival in Chicago, Dehd’s popularity has risen significantly in recent weeks. The Chicago DIY bands did not disappoint.

“All the first- and second-years just seemed really excited to meet new people,” Chalmers-Dibbell said. “The audience was so excited, people were crowd surfing, and there was a spontaneous dance circle. At one point there was a mosh pit and people were jumping around and everything was so high energy, and then the next moment people were slow dancing to Bnny’s music. That was so cool.”

While the concert was designed with first-years in mind, they weren’t the only ones getting their first exposure to Oberlin’s music scene; in many ways, it was a do-over orientation for second-years. Last year, when COVID-19 restrictions at Oberlin were at their peak, many concerts and events were canceled or moved online. College second-year Aimee Watts was disappointed in the lack of musical events last year, though she understands why many were canceled and appreciates Oberlin’s efforts to keep students safe.

“I got to experience the Oberlin community coming together to enjoy music, something I had been looking forward to since deciding to come to Oberlin,” Watts said. “Knowing that we had a world-renowned con- servatory, I was always drawn to the idea that we would have many music events to go to.”

Watts is not alone in her expectations of Oberlin student life; many people come to Oberlin eagerly awaiting performances and concerts on campus. One such student, College second-year Michael Eddy Harvey, also expressed his disappointment at last year’s lack of concerts.

“I came to Oberlin really looking forward to musical events and coming together as a campus that way, and when everything got restricted it made campus feel low-spirited,” Eddy Harvey said.

He felt that last year was partic- ularly tough to get through without Oberlin’s musical charm and concerts as a break from schoolwork.

Watts was excited when she first saw flyers around campus for the event, even though it was still masked. Watts explained that the crowd wear- ing masks at the event made her feel a lot safer. Eddy Harvey barely noticed them.

“Sure, it was frustrating to feel back at square one when it comes to COVID-19 guidelines, but the energy of the concert itself wasn’t affected,” he said.

Along with many other students, Chalmers-Dibbell was happy with how the event played out. Everybody in attendance wore masks, and even with restrictions, the event achieved its energizing purpose and kicked off a year of stellar Cat in the Cream concerts.