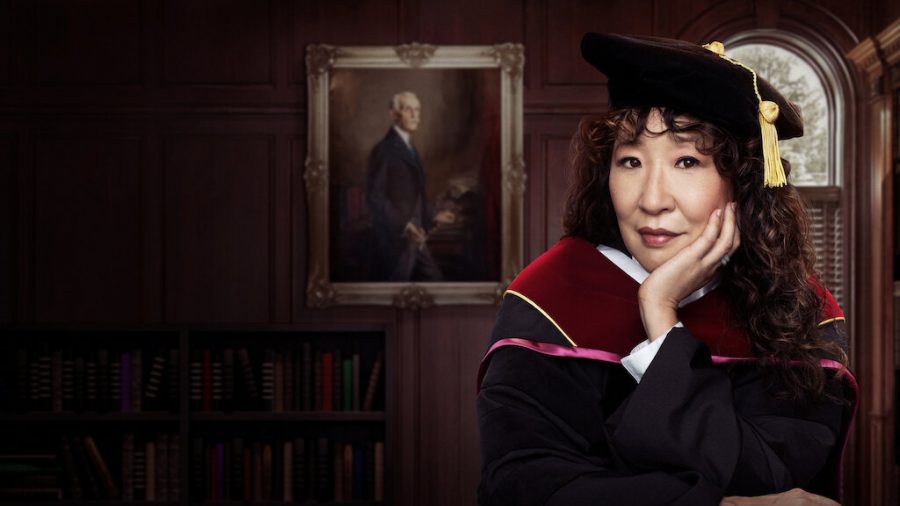 In the Netflix comedy series The Chair, creators Amanda Peet and Annie Julia Wyman tackle college cancel culture, intergenerational changes within academia, political complacency, and the value of studying literature in the midst of global catastrophe.

The show opens with an impromptu and horribly misguided “Sieg Heil” from an English professor at a declining elite college, Pembroke University. A video of this goes viral, outraging the student body and leaving the newly-inaugurated chair of the English department, Professor Ji-Yoon Kim — played by Sandra Oh — to pick up the pieces.

Sandra Oh plays an outstanding character uninhibited by any offensive stereotypes of Asian-American womanhood. Unfortunately, her lofty goals of providing her students with critical thinking skills and empathy are undermined by her need to cater to the demands of the predominantly white institution where she worked hard to gain acceptance. To her students, she comes across as a sellout more aligned with white gatekeepers than the hardworking community of color she is a member of.

The opening scenes depict Kim proudly strolling into the office of the chair. Yet, upon taking her seat, the chair breaks beneath her. Tension builds throughout the show as Kim realizes that the position is not at all what she dreamed of. Despite this reality check, Kim, ever the professional, takes the trials in stride. She doesn’t direct any ill feelings toward her privileged white colleagues, some of whom will not even meet her eyes; she is unwilling to be dismissed as an overly emotional woman. With years of experience dealing with the casual misogyny of the department, she directs the untenured Professor Yasmin McKay on how to correctly interact at a party at the dean’s house. Drink a glass of wine, not two — just enough to schmooze with the rich benefactors.

Kim’s interests as a scholar and teacher are in direct conflict with her personal life, especially considering she is held to a higher standard than her white colleagues. These very same colleagues, however, are the ones she is tasked with supporting. In one emblematic scene, Kim struggles to help Professor Bill Dobson tie his shoes, thereby missing a Title IX meeting with Chaucer scholar and second-wave feminist Professor Joan Hambling, played by Holland Taylor. Kim is forced to maintain Dobson’s high standing while Hambling’s tireless and gendered departmental service is rewarded with inaction, even from her friend and female colleague. Though the scene describes the values that Kim must adhere to in her new position, Kim’s adherence goes beyond simply becoming Pembroke’s institutional figurehead. She cares deeply about Dobson, whose intellectuality and journey at Pembroke matches her own. Further complicating her allegiances, Kim’s adopted daughter Juju — played by Everly Carganilla — seems to be smitten with Dobson. During his suspension, he stands in as a father figure for Juju, who is starved for affection and attention from her workaholic mother. “But why are you a doctor?” Juju asks her mother at one point. “You never help anybody.”

Sandra Oh wonderfully conveys the dueling emotions that Kim experiences. She is lonely, still dealing with the absence of her former fiancé. The empty space in her queen-sized bed is filled with unkempt books and papers — her work has taken the place of her endeavours outside of the classroom. In fact, she deals with her personal problems by putting her head down and studying. Yet, this is not possible in her new position. Though her true passion is teaching, as chair she is constantly pulled away from her own classroom. There are few scenes of Kim teaching throughout the show, but those we do get exhibit that her experience and calm are manifest — even in response to students’ hostility.

In one of the teaching scenes, Kim is shown in front of a blackboard displaying Audre Lorde’s oft-quoted line, “The master’s tools cannot dismantle the master’s house.” The students are outraged with the way that Kim has dealt with the scandal and align her with the white institution’s toxic behaviors. Though the students’ concerns are valid and wellfounded, student activism in the show often comes across as misplaced and ineffectual. Though they succeed in their trial against Dobson, the students antagonize Kim while being unaware or unwilling to see the numerous challenges she faces.

“Well, the university, being a bastion of white supremacy; that’s the master’s house. Therefore, whatever you learn or teach, those are the master’s tools,” a student states.

Another student follows with, “Some women in the academy pretend to be allies, but they’re not really doing the work. They stick a couple of Black women on their panels or on their syllabi, pat themselves on the back, and call it a day. It’s not enough to just insert a few people of color.”

Instead of focusing on academics, Pembroke’s administration wants Kim to deal with public relations and financial concerns over all else. Her teaching is thrown out the window and her personal concerns are disregarded. Furthermore, in the midst of dealing with these issues, Kim leaves behind her female colleagues — who often display the most cutting-edge, scholarly work — as they bear the brunt of the racism and misogyny of the primarily white and elderly department. When Kim is made aware of these facts, she crumples. Throughout the show Kim portrays moments of unharnessed emotion, which are somewhat absent from her professional work. Oh expresses these moments intimately, as if Kim were your own high-achieving and overstressed friend who desperately needs a break.

Through its comedic evocation of an English department in shambles, The Chair provides a nuanced depiction of the various complexities faced by women of color in positions of power. Sandra Oh’s brilliant evocation of one such intelligent and compassionate woman, Professor Ji-Yoon Kim, reveals the conflicting goals of improving the intellectual rigor of undergraduate academia and maintaining her personal and political commitments, all while attempting to steer a deteriorating white institution that doesn’t fully accept her personhood and position.