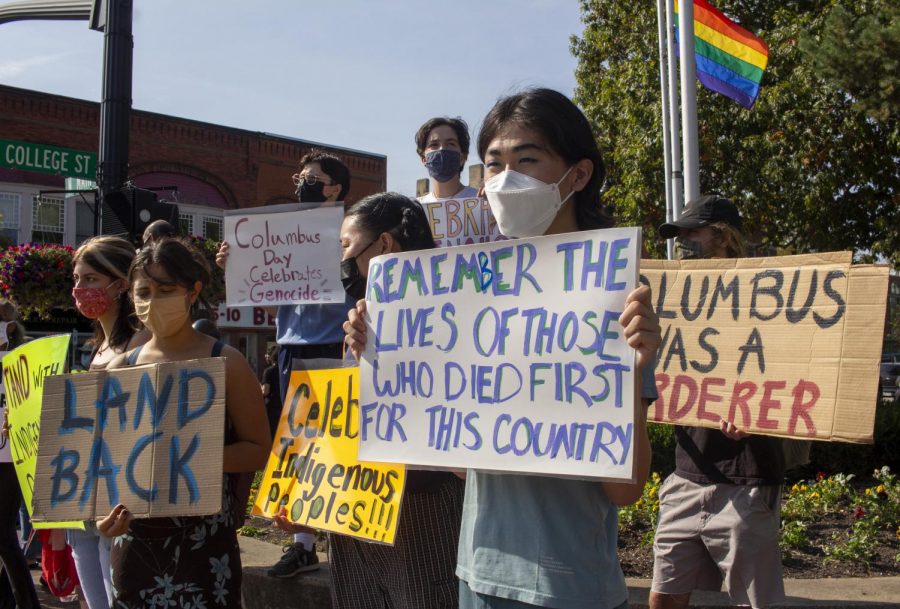 Oberlin residents and students gathered and held signs in Tappan Square to celebrate Indigenous Peoples’ Day this Monday. In 2017, the City of Oberlin formally recognized the second Monday of October, previously celebrated as Columbus Day, as a holiday for the recognition and celebration of Indigenous peoples. Oberlin was the first city in Ohio to adopt the holiday, and this past Monday was the fourth time the City has celebrated Indigenous Peoples’ Day.

Sundance, executive director of the Cleveland American Indian Movement and a Muskogee person of the Turtle Clan, began the event with a prayer. He thanked his ancestors and the spirits of the land who, according to the prayer, provided the world with life.

Following this prayer, City Council President Linda Slocum recited Oberlin’s 2017 proclamation, which replaced Columbus Day with Indigenous Peoples’ Day. Following these opening remarks, the event lasted for an hour as students and residents held signs at the College Street and Main Street corner of Tappan Square. The signs both acknowledged the ongoing violence of settler colonialism and honored the histories and cultures of Indigenous peoples.

Jean Foggo Simon, clerk of Oberlin City Council and member of the Indigenous People’s Day Committee, was integral to helping the city adopt the holiday in 2017.

“I think it’s long overdue for a celebration like this and to recognize what Columbus really did in his life,” Simon said. “I’m Native — Pequot — and I never knew anything about Columbus [Day] because we didn’t observe it. … This sort of gave me the opportunity to sort of come out and acknowledge who I really am.”

Amplifying Simon’s wish to recognize Columbus as who he really was, Sundance stated that the holiday helps spread awareness about the ongoing violence perpetrated against Indigenous peoples.

“Atrocity has been repeated throughout the centuries,” he said. “Even ’til this day, we have a highly disproportionate number of murdered and missing Indigenous women and girls. And, you know, it should be noted that we represent [approximately] 1 percent of the population. So I feel that it’s important to let people know that Columbus raped children and that Columbus was taken home and charged for crimes against humanity. Yet he has a holiday in this country as if he can do no wrong. … In order to honor the truth, you have to tell the truth.”

The Indigenous Peoples’ Day Committee hosts screenings at the Oberlin Public Library on the third Thursday of every month.