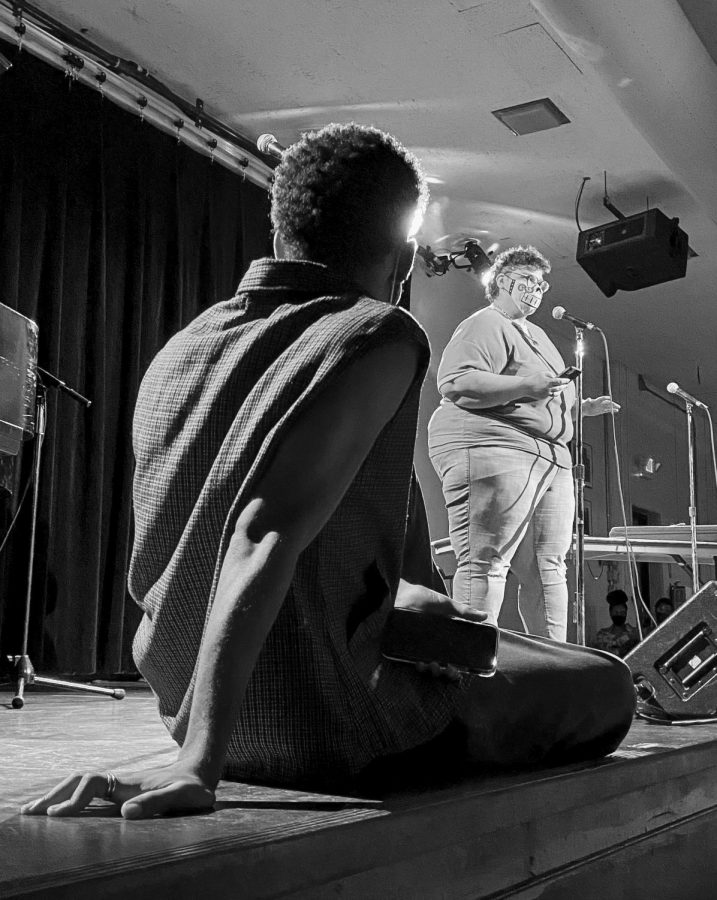 The Cat in the Cream hosted OSLAM’s first indoor, in-person performance since the onset of the COVID-19 pandemic.

In its first in-person performance at the Cat in the Cream in over two years, OSLAM, the College’s slam poetry team, returned to the venue on Saturday, Oct. 9 for its back-to-school performance. Primarily featuring first- and second-year members — most of whom had not yet had the opportunity to perform on stage due to the College’s COVID-19 guidelines on indoor gatherings — the show featured 14 poems, with guest musical performances by DJ Kopano, Conservatory second-year Nash McBride, and College third-year Anthony Singfield.

“It was so amazing to be back in the space,” said College fourth-year and OSLAM member Olivia Lee. “It’s such a beautiful environment, and there is just a really special energy. They have accessibility seating and the staff are so kind and welcoming; it just feels so open. This show felt really special, because a lot of our second-years, who performed with OSLAM virtually [during remote semesters], got to have their first experience at the Cat. OSLAM and the Cat in the Cream just have a really intertwined history, so it just made me super happy to be able to see them perform.”

In the first musical interlude, McBride offered a beautifully languid piano performance, filling the room with enigmatic crescendos. Perfectly complimenting OSLAM’s spoken word pieces, Kopano’s high-energy DJ set got the crowd on their feet while Singfield’s stunning rendition of Bruno Mars’ “When I Was Your Man” serenely radiated over the crowd.

“We were able to break up the performances with incredible special guests, so we got to stand up and dance,” Lee said. “All the poets got their nerves out, and the music and poems blended together so perfectly.”

While the group staged outdoor performances in the Arboretum over the summer, finding seating and an adequate sound system proved difficult.

“[In the Arb] we were performing with a handheld mic, so it’s nice to have some sound support,” said College fourth-year and OSLAM poet Banu Newell. “Also, we usually have a bigger audience for our first couple shows, because first-years are curious about what OSLAM is, and the Cat allows us to all fit in the space together.”

Even with the added seating, though, the venue quickly became overcrowded.

“We were definitely not expecting that many people to come,” Lee said. “But it was so wonderful to see that [the Cat] was over capacity. There was a line out the door, and from the stage you could see that people were actually outside sitting on the grass and sidewalk trying to hear the performances.”

College third-year Tesia Singh-Ragen noticed the large crowd forming outside the venue’s doors as she made her way up Lorain Street, toward the Cat.

“We were really excited — I’ve heard a lot about OSLAM performances, and I know they had a really beautiful one in the Arb this summer,” she said. “We saw people congregating around the outside of the Cat in the parking lot, and as we were approaching we spoke to them and they said that they were at capacity. … When we came around the corner we saw there were so many people in the grass waiting to see if they could get in.”

While some students were disappointed that they couldn’t listen to the performances in the Cat itself, OSLAM members were thrilled at the turnout.

“There were so many new faces, and it was so refreshing to see our new members use their natural instincts,” Newell, who emceed the performance, said. “[OSLAM] means so much to me. It’s definitely elevated over the past couple of years. [Participating in] a writing community [interested in] creating stories and telling truth is such a relieving process. … You have a network of people who are familiar with your work and your voice, who want to see you become a better poet is so important. We just want to collaborate and create.”

For Lee, OSLAM’s performance marked a new chapter of the group’s legacy. In preparation for the year ahead, both she and Newell are especially focused on preserving the group’s tight-knit, accepting culture.

“During the pandemic, it was really hard to make OSLAM feel like a family,” Lee said. “[Since we’ve been back,] we’ve been having lots of conversations about how to uphold this tradition — not for Oberlin or the image that people have of OSLAM — but with the intentionality of centering this Black art form and these student works; even just expanding what poetry looks like. Reggie Goudeau performs rap songs; that’s his mode of poetry. And Imani Badillo has shown pieces of their fiber art or drawings they’ve done. That is poetry too.”

As graduation nears, Newell is thinking about how to preserve OSLAM’s legacy, emphasizing the importance of cultivating and maintaining a slam poetry community at Oberlin.

“This art form requires a lot of reflection and vulnerability,” Newell adds. “As a [fourth-year], it’s really important to me that we leave behind a space where people feel like they’re held and [made to feel] comfortable in their writing, where they feel like they’re heard as artists and poets. Slam poetry is a Black art form, and we need to make sure [those students feel that] they’re equally and fairly represented on this campus and in the group itself.”

Looking back on her time in OSLAM, Lee recalls one of her first meetings with the team.

“I remember after I was first accepted, [the group] was reading a poem,” Lee begins. “I read it out loud and I started crying. I don’t know — for some reason I just kept apologizing, and I felt embarrassed. And I remember everyone telling me that it was totally okay, telling me to take my time and talk it out. That moment of vulnerability and being accepted — not only when you’re sad or doubting something but also when you’re feeling anger or anxiety or paranoia about things going on in the world — is so special. Having that support through whatever you’re going through, it’s such a supportive community, and it’s a hugely fundamental part of Oberlin.”