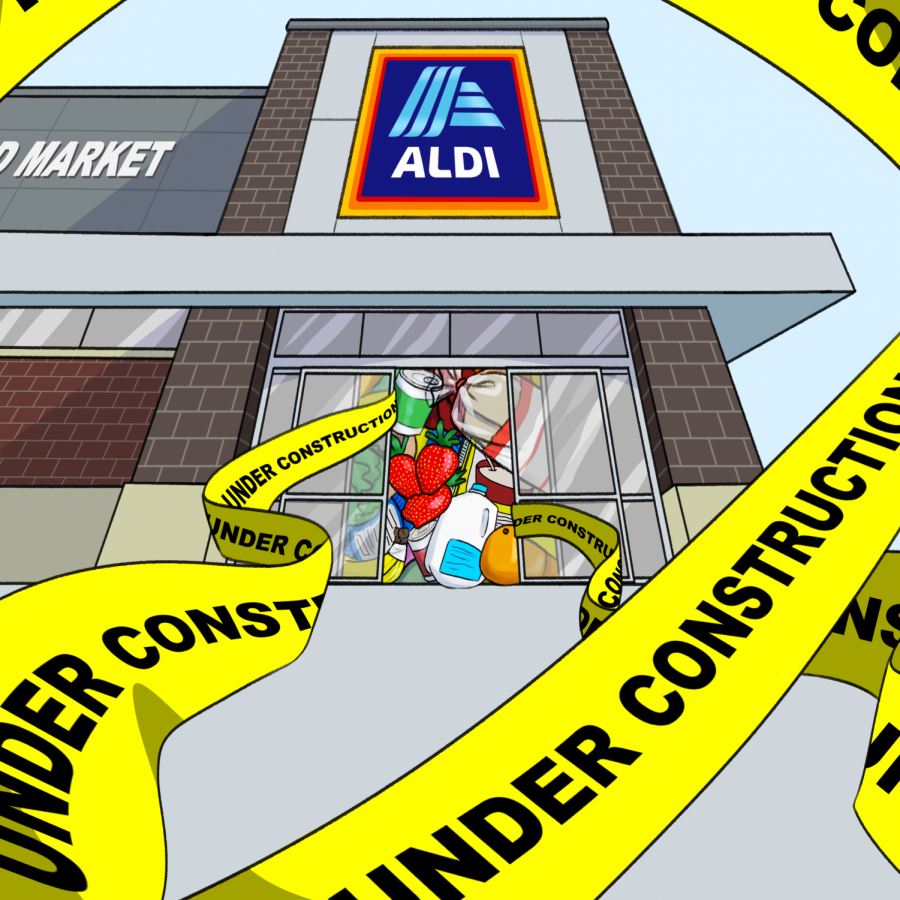 The Oberlin Planning Commission recently approved plans for an ALDI grocery store, which will be the first retail outlet built in the Oberlin Crossing shopping center.

On Sept. 15, the Oberlin Planning Commission approved plans to build a new ALDI grocery store in the City. Two years ago, Oberlin City Council rezoned nearly 28 acres of land at the proposed ALDI site to create a larger retail space called Oberlin Crossing. After several years of delay imposed by COVID-19, ALDI will be the first project built in the area, and some community members hope that it will be the start of greater economic revitalization for the town.

In order to build the Oberlin Crossing shopping center, the group overseeing the project, Carnegie Management and Development Corporation, had to navigate the City’s legislative process. In 2019, City Council rezoned the land from its original classification as an office space to its new designation as a heavy commercial zone, or C3, which opens the land up to commercial use. The rezoning opens up the land to developments beyond just the ALDI.

“Carnegie had originally proposed a much larger development that would have included the ALDI’s,” said Carrie Handy, director of planning and development. “They’re saying it’s the first phase. So instead of doing it all at once, they’re gonna phase it. The bigger development included more retail space, some restaurant space, and some office space.”

Since the proposed location is officially rezoned, Carnegie Management must simply seek administrative approval from the Planning Commission for each proposed building they want to create in the space. In early September, representatives from the group met with the Commission for approval for the ALDI.

When the plans for the Oberlin Crossing area were originally proposed, a few residents expressed concern that inviting large, big-box stores into the City limits would damage Oberlin’s small-town identity. However, Oberlin City Councilmember Kelley Singleton says these concerns are largely overblown.

“People are excited about it,” Singleton said. “[There will be] more options for groceries. There are people that already shop at ALDI’s in Amherst and now don’t have to drive all the way up there to go there. It’s just more choices.”

Mark Chesler is one resident who is less excited about the development. This week, Chesler filed a lawsuit in the Lorain County Court of Common Pleas saying that the site could create an increase in traffic. Chesler has often fought development plans within the City, including changes to food truck zoning rules in 2015 and a proposed O’Reilly Auto Parts in 2016.

Before the plans were originally approved, the Oberlin Planning Commission did a traffic impact study which resulted in the Commission and the Ohio Department of Transportation requesting that Carnegie create northbound and southbound turn lanes, move a driveway, and change the lighting near the development.

The new ALDI may also pose some challenges to local businesses that will have to compete with the supermarket. Yet, according to Executive Director of the Oberlin Business Partnership Janet Haar, it could go the other way too — local businesses may benefit from people coming to Oberlin to shop at the ALDI.

“I have conflicting thoughts on that because I know how hard [President at Braido Foods and Owner of Oberlin IGA] Leo Braido and Oberlin IGA have worked to come into this community and build his store to serve the community while also trying to be environmentally conscious,” Haar said. “The other thing I think about … is that more people … will be coming into the Oberlin area and perhaps, if we promote things correctly, would also come downtown and do business with other businesses in downtown [Oberlin].”

Additionally, the proposed ALDI could cause new stores to open up in the Oberlin Crossing area. Singleton hopes that the ALDI will act as an anchor for new businesses and a marker of economic growth.

“We’re trying to signal that Oberlin is open for business,” Singleton said. “There’s a perception that Oberlin is very hard to work with. … We are trying to change that view and get more businesses in the town, get more local employment, and increase our tax base so we can support our schools and City services.”

Haar agrees that the ALDI could act as a catalyst to increase the prosperity of all businesses in town.

“The more we have, the more people are going to come, and the next time they come, they might eat at a different restaurant,” Haar said. “It’s a fallacy to think if you’ve got one business, you can’t have more than one. So that’s kind of where I come from — the conflicting piece. I don’t want it to adversely affect IGA. And, on the other hand, I think it might positively affect the City of Oberlin.”

The positive effects of the new ALDI counter some residents’ remaining concerns about its potentially negative impact. New opportunities provided by the grocery store could strengthen local economic conditions and provide more competition to pre-existing businesses.