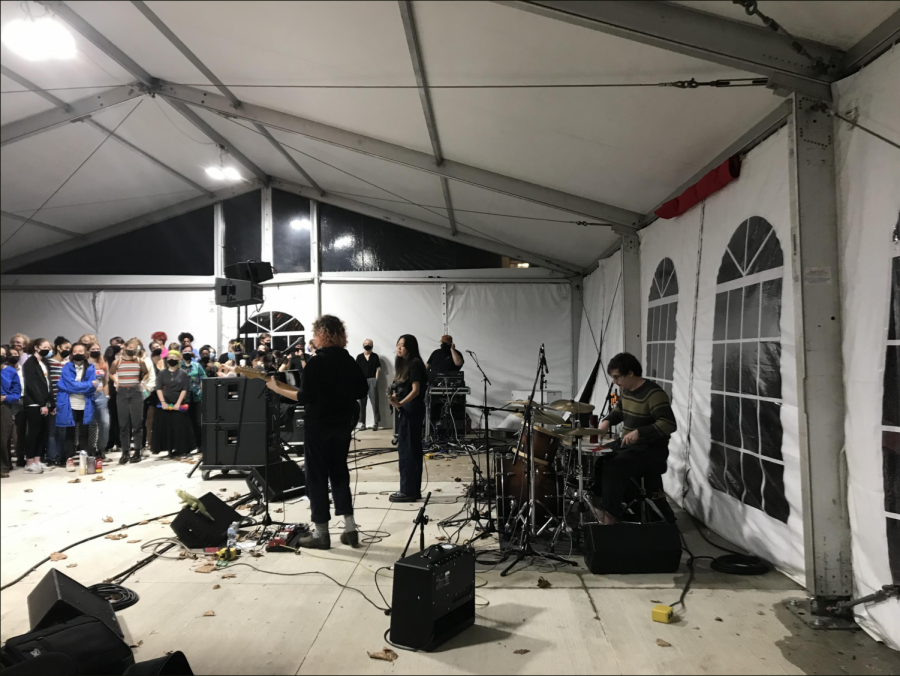 This past weekend, Squirrel Flower — the stage name of indie-rock musician Ella O’Connor Williams — filled Wilder Bowl with sweet, slow melodies. The concert was sponsored by the Cat in the Cream but occurred in the outdoor tent adjacent to Wilder Bowl that has become the new hotspot for campus concerts.

College third-year Emelia Duserick has been working for the Cat since July. Her favorite part of the job is working with her co-workers, but booking musicians is a close second. She got in contact with Squirrel Flower by happy mistake —  she was initially vying for pop-leaning indie-rock artist Soccer Mommy.

According to Duserick, booking artists is a rewarding but intensive process; she and her co-workers have been preparing for Squirrel Flower since August. When Oct. 15 finally arrived, she was buzzing with anticipation. Luckily, the event’s energy and turnout lived up to her expectations. She even got the chance to show Squirrel Flower around the Rathskeller after the show..

“I was kind of nervous about it, but it turned out so well,” she said. “I think we probably had a little over 100 people in attendance, which was really great, and that’s probably the amount we get at the Cat regularly. They played some great songs. They were rocking. … We took them to the [Rathskeller] afterwards. They sold out of all their merch [and] signed a lot of autographs.”

College third-year and concert attendee Dina Nouaime returned from the show with a glowing review.

“It was just a lovely experience,” Nouaime said. “We were all gathered under the tent and spilling out onto Wilder porch and had a lovely view of the band from there. Just the general ambiance was really lovely.”

Nouaime finds that this event is reflective of her larger excitement toward the intimacy and specificity that the Cat facilitates when putting on concerts — an intimacy not often achieved by events and venues in big cities.

“The Cat in the Cream has been amazing and has been really able to draw in a variety of different types of artists into Oberlin, which has been a really great experience to see these bands on such a small scale,” she said. “As opposed to attending major concerts in huge cities where you don’t really get that intimate, personal level with the artists.”