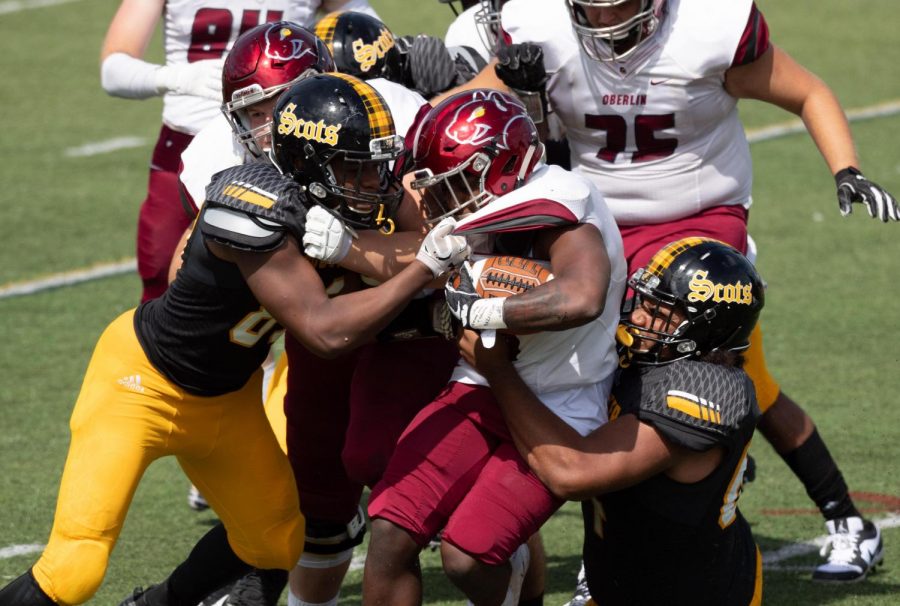 Homecoming: Oberlin football competing against The College of Wooster in 2019.

Last weekend, the class of 2020 was welcomed back to campus for a delayed commencement after they were sent home in their final semester of college. Many athletes never got to say goodbye to their teammates, so the graduation celebration also served as a long-awaited reunion.

For student-athletes who got sent home without their last collegiate season or proper fourth-year semester, it was refreshing to be back on campus this past weekend, where they felt welcomed and at home.

“It actually felt more normal to be on campus with my teammates and classmates than it feels to live in the post-college world,” said McLean Sammon, OC ‘20, former volleyball player.

“I’ve been living in Pittsburgh post-grad and doing research for the University of Pittsburgh Medical Center, but it’s been a hard adjustment,” she said. “Especially since the first year and a half I was living there we were in the height of the COVID-19 pandemic. I didn’t really have opportunities to make friends or go out to explore the city.”

Former lacrosse player Thomas Berle Carman, OC ’21, said it felt different being back, despite just being on campus in May.

“Even though I graduated only last spring, it felt so different being back,” he said. “My day-to-day has changed a lot over the past few months and I guess I hadn’t realized how much until I was back.”

Berle Carman has been living in New York City with two other Oberlin lacrosse alumni and has been getting used to the faster paced lifestyle there.

“Without the whole student body being on campus my last year, I was definitely taken back [to] being on campus with everyone and all the first-year students,” he said. “It was super refreshing to see the school have this energy that I haven’t felt since my second year.”

“It feels like the 2019 season was a lifetime ago,” Rau said. “It made my heart so full to see everyone and hear about everything they have been doing over the past two years.”

Coach Rau made history this week by securing Oberlin’s first ever conference win against the DePauw University Tigers in program history on Saturday, Oct. 16.

“We had been steadily improving, and I felt like they were a good matchup for us,” Rau said. “I knew that we could beat them, but I wasn’t sure the rest of my team did. They rallied together and took care of business.”

Rau thinks the positive attitude her team had that weekend helped the team secure this win. She highlights how fun their practice was the night before game day.

“We had five alums come to practice on Friday, and we played first-years [and] second-years versus third- and fourth-years [and] alums,” she said. “It ended in a tie but it was one of the most fun, competitive practices we have had all year.”

Sammon also thought that the volleyball alumni match was one the best events she participated in this past weekend.

“The volleyball alumni got to play with the current team, which was interesting because the team is so young and so new,” she said. “Me and the other alumni knew less than half the team, but we had a great time rediscovering our volleyball skills and learning more about the new players.”

This weekend was also the 57th annual men’s lacrosse alumni game, a tradition that had been postponed because of COVID-19.

“This year we had almost 40 alumni come back, and although we tried our best, we couldn’t quite keep up with the current team, losing 10–5. I still had so much fun, though,” Carman said.

For Carman, one of the best aspects of the alumni tradition is getting to reunite with teammates whom he hasn’t seen in years.

“The lacrosse alumni match is one of the only times I see most of the people I played with throughout my entire collegiate career,” he said. “I got to see the guys who I only played one year with when I was a first-year, and it was amazing to learn about what they’re doing now and catching up. The alumni network we have is really strong. My first year as an alumni did not disappoint.”

Sammon also got to see some of her roommates, with whom she lived with for three years, and said it was so heartwarming for most of them to be back in the same space again.

“A lot of my friends came back for the weekend. We hadn’t gotten to celebrate the end of our time at Oberlin so it felt wonderful to be given that chance,” she said. “My roommates, who also played sports at Oberlin, were here with me this weekend, and when we were living together, I grew close to some of their younger teammates as well, so I got to see those people too.”

Rau believes that overall, it was an unforgettable weekend for the Oberlin athletics community.

“We had a great crowd at the match on Saturday, and all that helped us to be successful in our first program win against DePauw,” she said. “I also really enjoyed watching one of my players, Iyanna Lewis, and the rest of And What?! perform during halftime of the football game.”

The weekend ended with the SAAC yard sale and fireworks show. Rau said there were at least 100 people gathered on Bailey Field to watch the fireworks, and it made her so happy to see everyone together.

“The athletics department is truly a family,” she said.