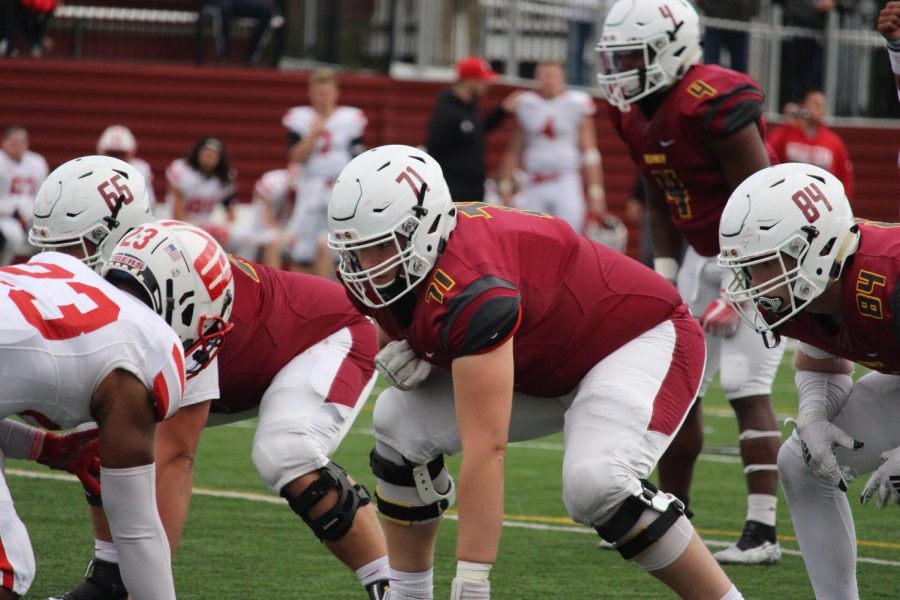 Oberlin football has been itching to make its first win of the season under the new leadership of Head Coach Steve Opgenorth with one of the largest rosters that the team has had in recent years. Last Saturday, the Yeomen achieved this goal with a score of 31–28 against Hiram College.

Before the game against Hiram, Opgenorth asserted that a good mindset was key for the team to put forth its best effort.

“The guys had a really good week of practice, showed up with the right mindset, and played well,” he said. “It’s that feeling after a win that keeps you coming back for more. It was a win that was well-deserved for a crew that is continuing to get better week by week, and they were able to come together on Saturday afternoon against Hiram.”

In 2019, Oberlin football beat Hiram 7–0. Third-year wide receiver Brian Colarusso said that the players were conscious that, even though they beat Hiram in 2019, Oberlin would still have to work for this win. Team members are looking forward to the rest of the season.

“Our mentality was that we were fully prepared and expected to win the game, but we all knew it was going to be a battle,” he said. “Words can’t describe that feeling when you’ve been working so hard as a football family and finally get to reap the fruits of your labor. I was really proud of all my teammates for the effort and heart they displayed. We won as a full team on Saturday and we are happy but not satisfied.”

Going into the game, the team received a lot of support from fans and family who were anticipating the win. College fourth-year Yanni Sarrimanolis, who walked onto the football team, believes that this support made a difference in terms of boosting confidence and morale.

“I think the biggest thing is we had a lot of support going into the game from other people at Oberlin,” Sarrimanolis said. “A lot of weeks people don’t really reach out. But this week, there was an especially high level of support from friends and family and other classmates. Winning at the end just feels awesome. It feels great to be a part of a changing organization and it’s awesome to represent Oberlin in that way.”

The football team was able to get ahead early on in the game against Hiram because of its strong defensive line. Third-year quarterback Chris Allen Jr. had an exceptional game, completing 24 of 36 passes for 247 passing yards and scoring four touchdowns. The offense also made significant movement and was able to support the team when there was a lull toward the middle of the game.

While this is the first game that the Yeomen have won this season, there have been some other close games, including the one against The College of Wooster in which Oberlin lost 28–24. Nevertheless, the team has continued to leave it all out on the field, and the losses have taught them how to overcome challenges and keep moving forward.

“I think as a team we learned how to finish the job and seal a victory in the fourth quarter,” Colarusso said. “The goal is always to win, and while we have competed in many close games this season, we haven’t been able to piece it all together and secure a win. Personally, I learned the importance of persistence and never quitting. In times of adversity, if you keep working hard day after day, eventually something good is going to happen. I think this win also gave the young guys some confidence as they won their first college football game.”

Opgenorth believes that the challenges the team has faced has brought its members closer together.

“The greatest teacher is adversity,” he said. “We certainly have found our fair share in the fourth quarter, lost some close games, but I’ll be honest, I think it’s probably brought us closer together. We have a coachable group that’s always willing to learn something new.”

Opgenorth added that this growth mindset is applicable to all aspects of life both on and off the field.

“They’re learning something new,” he said. “They’re learning something about each other and the game every day. One of my favorite quotes is, ‘You’re either growing or you’re dying.’ And our guys have proven that they’re growing, and it’ll show up in life, in football, and in everything else that they want to accomplish. We wanted to win and we continued to get better as the season progressed.”

Looking to the rest of the season, the Yeomen have two remaining games to close out 2021. Besides technical skills, Sarrimanolis thinks that continuing to have a positive attitude and atmosphere going into games will enhance performance.

“Trying to replicate the atmosphere we had going into the Hiram game is key and making sure that we’re all positive,” he said. “You don’t want to get down on yourselves before the game even starts. The biggest thing was just the support we had from other community members as well and just reaching out to people for support. It really boosted morale, and having great leadership made a difference. It starts at the top and trickles down. Our coaches were positive, our leadership was positive, and we ended up pulling out a win.”

With the remainder of the season, the Yeomen are starting to prepare for their offseason practices but are still focused on aiming high for the last two games.

“We’re not quite focused on the postseason yet,” Sarrimanolis said. “We’re still turning things around here, Coach Opgenorth is trying to rebuild a program, and that’s what we’re going to do. It’s been an upward trajectory throughout the season. Obviously not as many wins as we’d like but we’ve been playing well, so we’re focused on those last two games.”

Colarusso believes that this is just the beginning for Oberlin football and what it can and will accomplish in the future.

“My goal for next season is to reach our potential as a football program and win as many games as possible,” he wrote. “As a team our goal should be to limit our missed opportunities and make more game-changing plays. Personally, my goal is to be the best wide receiver in the conference and the best teammate I can be.”

The team is excited to continue to hone their skills and grow as players after the season is over.

“Based on what I’ve been hearing from coaches and players alike, everybody is really excited to do the little [things] that we need to do to change the program and develop as a team and individual players,” Sarrimanolis said. “No one is bummed out that we’re going to continue to work hard, which is awesome.”

Opgenorth added this is just the beginning of Oberlin football.

“It’s been a storybook fall season,” he said. “I couldn’t be more proud of our guys out there. The win on Saturday — but certainly the resolve and fighting nature of the team — shows that no matter how old they are or where they are in their college football career, Yeomen football is on the rise.”