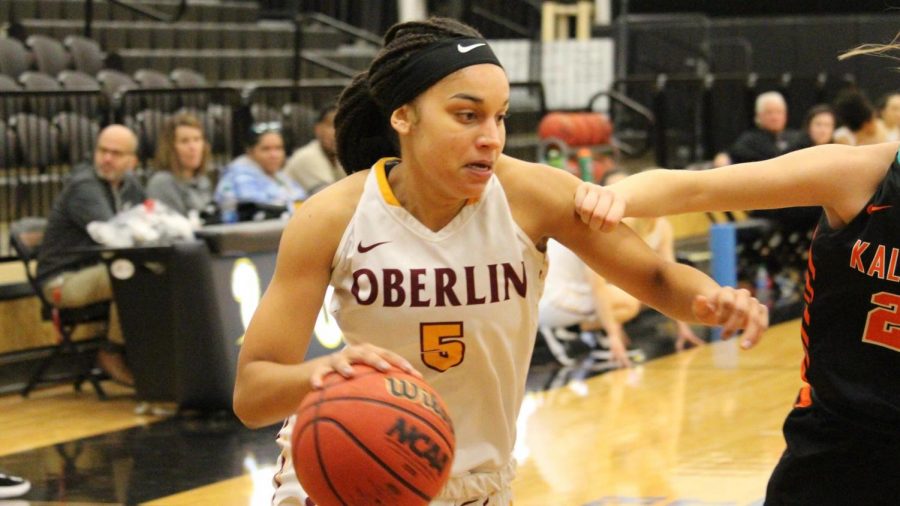 Fourth-year on the women’s basketball team, Rowan Smith, dribbles up the court.

With November around the corner, sports fans across the United States anticipate the beginning of the college basketball season. For their first game in nearly two years, the Oberlin women’s basketball team will face Alma College Nov. 9 at Philips gym to mark the return of college basketball to Oberlin.

With the combination of the 2020–21 season being cancelled due to COVID-19 and the team mostly consisting of first- and second-years, the squad will come into the season with little college game experience. Head Coach Stephany Dunmyer credits the strong group of young players but knows leadership from the more experienced players will be crucial to the team’s success.

“We have three [fourth-years] and two [third-years] who have experienced a season with outside competition and with a full practice and travel schedule,” Dunmyer said. “Those five will need to show the way and help our first-years and [second-years] with the transition to a full college season.”

Fourth-year Rowan Smith recognizes this responsibility but also believes the younger members of the team are a special group.

“Luckily, I think we’ve already been given some pretty mature [first- and second-years],” Smith said. “So far I think they’ve all adjusted pretty well to practices and learning plays. As [fourth-years] I think my class really wants to focus on our team culture and connection. We’ve been building a great team culture, and hope that once we leave Oberlin that standard will always be held on our team for years to come.”

Smith says specific goals for the season include securing a home playoff game but also for every member of the team to join the voluntary ‘10,000 Shot Club.’ This means each player would put up at least 8,000 game-like shots and make 2,000 free throws on their own time outside of practice and games over the course of the season.

“We all have white boards on our lockers, and at the beginning of each week we write down what our commitment to the team will be for the week,” Smith said. “The commitments are what we plan on doing for that week in order to help our entire team be the best we can and reach our overarching team goals. An example would be something like, ‘Getting up 200 shots every day after practice this week.’”

Fourth-year Sammy Spanier recognizes how special it is to get to compete after last season’s cancellation.

“The pandemic has definitely put a lot of things into perspective and reminded us not to take anything for granted, so to be able to play the sport we love in front of our friends and family will be extra special this year,” Spanier said.

With the first game coming up in less than two weeks, preseason training is in full swing. Dunmyer, who is entering her third year coaching the Yeowomen, is using this time to implement different strategies to prepare the team for competition.

“Our biggest focus so far has been on the offensive end of the floor, teaching various actions and establishing our two main offenses,” Dunmyer said. “In the next week, we will shift our focus to the defensive end of the court. We have players with great basketball instincts so we want to put them in positions to be able to read the situation and play basketball. Getting that chemistry on and off the court has been a big focus as well.”

The Yeowomen start the season with five non-conference matchups but begin North Coast Athletic Conference play Nov. 27 at Wittenberg University. Smith and Spanier have the matchups against Wittenberg and DePauw University circled on their calendar.

“DePauw is typically the best team in the conference so it’s always exciting to match up against them, because it’s just a different level of competitive energy. We always play them close but haven’t been able to come away with the win so we are hoping to get that done this year,” Spanier said. “Wittenberg is also a pretty good team and a fun, competitive match up.”

In addition to the Nov. 9 home opener, significant dates for the Yeowomen include the NCAC home opener against Ohio Wesleyan University on Dec. 8 and two matchups against defending NCAC champion DePauw University on the road Dec. 11 and at home Feb. 12.