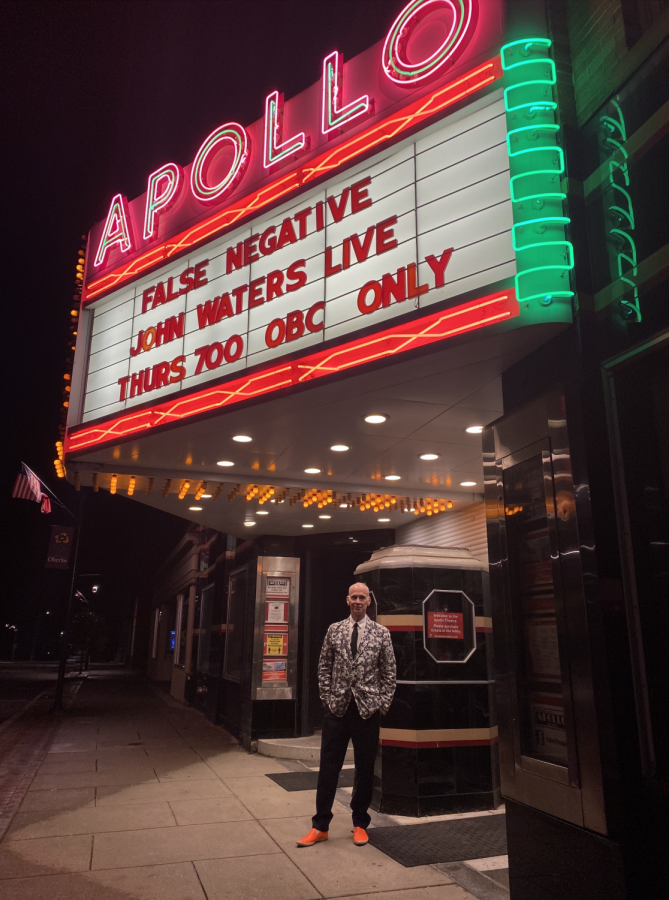 This past Thursday, the Oberlin Film Co-op invited writer and filmmaker John Waters for a performance of his live show False Negative and a screening of his 1988 film Hairspray at the Apollo Theatre.

On Thursday night, the Oberlin Film Cooperative hosted writer and filmmaker John Waters at the Apollo Theatre. Waters performed his one-man show False Negative and hosted a screening of his 1988 commercial hit film Hairspray. The event was open only to the Oberlin student body  and was completely free to attend.

Waters, known for his transgressive, cult-status comedy films, is also an actor, visual artist, and more recently an author. In the ’70s, Waters wrote and directed Pink Flamingos, Female Trouble, and Desperate Living, which became known as his “Trash Trilogy,” which features postmodern comedy, surrealism, and “campy” characters, including drag queen Divine. Waters’ 1988 film Hairspray was his runaway hit and was developed into a Broadway play.

Waters had a conversation with the Review about everything from his upcoming tours to Trumpism and Oberlin as the “politically correct capital of the world.”

Waters described fitting in Oberlin on his current tour.

“I just got back from … Pittsburgh where I did a Halloween show, and I was in Brooklyn where I did a podcast,” he said. “And then this coming week, I’m coming to see you. And then I go to two Halloween shows in Minneapolis … and then 17 Christmas cities. So yes, I’m back on the road in the middle of a pandemic.”

Waters’ appearance at the Apollo was organized by College fourth-year Sam Blieden, a Film Co-op board member and self-described fan who describes Waters’ talk as her “dream event.”

“John Waters is one of my favorite directors,” Blieden said. “I absolutely adore his movies and who he is as a person. I was talking to [Professor of English and Cinema Studies] William Patrick Day… and he had mentioned to me that John Waters came to Oberlin in the ’90s — someone just wrote him a letter, and was like, ‘Hey John, you wanna come?’ As a member of the Film Co-op, I was like, ‘Oh, we’re trying to book new people; what if I try to get John Waters to come?’ So I do some research, and I find his booking agent, and it was a slow process from April to August, when things started to go rapid fire. At first we weren’t sure if we were gonna be able to get the money, and then we got the money!”

Day attended Waters’ talk at Oberlin back in the ’90s and described it as remarkably personal.

“It was actually completely organized by students,” Day said. “It was not a College-sponsored event… He came in and he did a talk in the ’Sco because that was the only place they could put him; they couldn’t get any of the other College places for him. I don’t think the College fully understood who John Waters was. He did a really fantastic speech, and he went on for about an hour. It was smart and funny and all that stuff. What was really striking to me about that — it was a long time ago now — he really engaged with the students. Not only the people in the ’Sco during the question and answer period, but the people who brought him; he was really responsive to them — really paid a lot of attention to them. I’m really glad he’s coming back.”

As the primary organizer, Blieden was responsible for everything from driving Waters to and from the Cleveland airport to arranging and publicizing the event.

“Obviously I’m a big fan, but I’m a chauffeur for the evening,” Blieden said. “Just making sure it all goes smoothly, which is my main goal as the showrunner of the event. You just want it to work out and everything to be in order. … I feel like the [phone interview] was a good preface to what to expect in a way. It’s a different setting, [an] interview versus driving in a non-recorded environment, but I’m excited.”

While Waters has not directed since his 2004 film A Dirty Shame, he certainly hasn’t slowed down. Instead, he’s been working on personal projects and has developed a prolific career as an author with such works as Carsick, which details his experience hitchhiking across America, and Role Models, an autobiography told through descriptions of some of Waters’ favorite personalities.

“I feel really excited about seeing him. But I kind of wonder — he had moved into his more commercial phase in the ’90s and we all saw that stuff, and I keep wondering how students understand John Waters, because he’s a writer now — much more than a filmmaker,” Day said.

Blieden says her personal favorite of his films is Cecil B. Demented, a satirical film about “cinema terrorism” that pokes fun at Hollywood as an industry. Waters said that part of False Negative imagines what “cinema terrorism” might look like today.

“I think the first film I saw of his was Pink Flamingos, and I love a lot of schlocky movies, and the comedy and absurdity and the satire of his films, I just really fell in love with,” Blieden said. “None of his movies are longer than 90 minutes, … and they’re kind of transgressive in what they do, and I can rewatch them endlessly because they’re just so fun.”

In his return to Oberlin, Waters hopes students are ready to engage with him. When asked why they should come to the show, Waters took a moment to respond.

“Maybe they need a laugh at something that they’re nervous about laughing about,” he said.