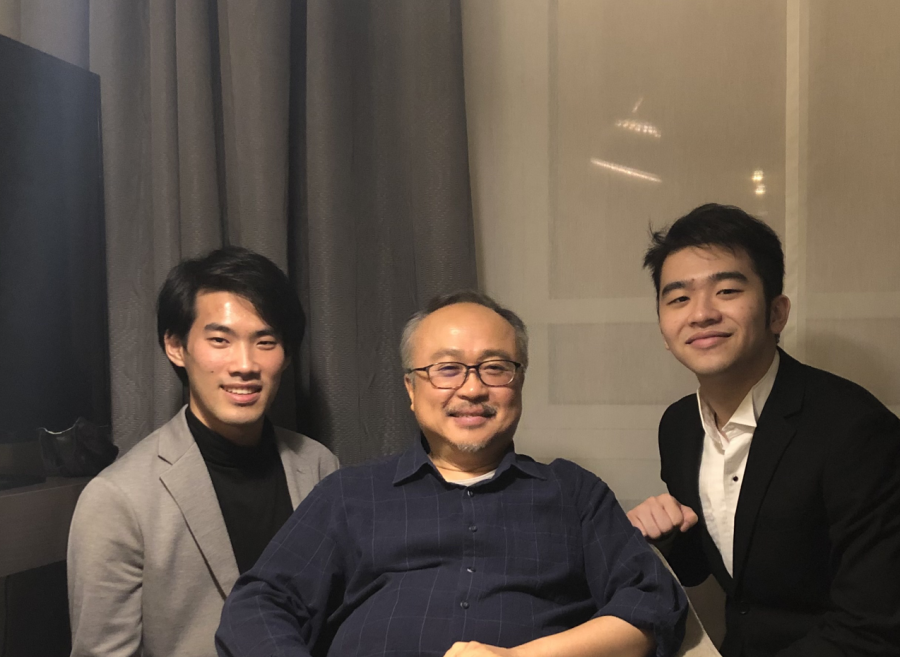 Left to right: Oberlin-Como Fellow Bruce (Xiaoyu) Liu, Professor of Piano Dang Thai Son, and Conservatory second-year JJ Jun Li Bui pose for a picture taken after the Gala Award Concert ahead of their debut at the 18th Chopin Piano Competition in Warsaw. Kai-Min Chang also participated in the competition but isn’t featured in the photo.

This past month, three Oberlin pianists participated in the esteemed 18th Chopin Piano Competition, an international competition held this year from Oct. 2–23 in Warsaw, Poland. Among the participants and prizewinners of the competition were Oberlin-Como Fellow Bruce (Xiaoyu) Liu, who won first prize Conservatory second-year JJ Jun Li Bui, and Conservatory third-year Kai-Min Chang, all of whom are students of Oberlin Professor of Piano Dang Thai Son.

The competition, organized by the Fryderyk Chopin Institute, was originally scheduled for 2020 but was postponed until this year due to COVID-19. In all rounds of the competition, participants were required to prepare repertoire solely by Fryderyk Chopin. Those who passed the preliminary round in July of this year moved on to stage I, which took place in early October. Those who passed stage II and stage III were able to progress to the final round. The pool of candidates progressively dwindled throughout the course of the competition. Last week, the select few who reached the final round had the chance to perform either Chopin’s Concerto No. 1 in E minor, Op. 11 or the Concerto No. 2 in F minor, Op. 21 with the Warsaw Philharmonic Orchestra at the National Philharmonic concert hall in Warsaw.

Among the 17-member competition jury was Dang Thai Son, a Vietnamese-Canadian pianist and Oberlin piano professor. Dang participated in the 10th Chopin Piano Competition and won first prize and a gold medal in 1980, the first time that a major international competition was won by an Asian pianist. He explained that his love for Chopin was inspired by his mother, who is a pianist herself. He remembers hearing her play some pieces by Chopin one night, after which he fell in love with the music.

“In the silence of the night, she played a bit of Chopin, a Nocturne and Mazurka, and I fell in love with this music when I was about eight, nine years old,” Dang said. “And then in 1970, she was invited to the Warsaw Chopin Competition [as] a guest. And then after this, she brought back complete music scores, recordings, and talked about the competition. So I, day and night, had Chopin, and I had nothing else. I had no Mozart, no Beethoven, no Bach. I had only Chopin. And I loved this music. I was passionate about this music.”

As the youngest finalist in the competition, sixth-prize winner Bui sometimes felt overwhelmed by the large scale of the event.

“Of course, it’s a really big moment in my life,” Bui said. “It takes a lot of work to get there. And of course, luck, too. [It’s] such a big competition that feels kind of overwhelming at times. And I think that it’s good to try to be humble and not to let it get too much to your head. And … focusing on music during [the] competition is very important, because a lot of people might get too distracted with the publicity and all the cameras. I think relaxing and focusing on your music is so important.”

Bui hopes to take a break from competing and plans to focus on his studies now that the competition is over.

“I just kind of want to focus on my studies a bit, because I’ve been away for such a long time,” he said. “It’s a good thing to relax and not [do] competitions for your whole life. It’s because I think sometimes competitions can kind of get to your head and then music kind of just becomes like a competition. … I think music competitions are just a way to open doors for your career and as a musician, as a pianist, but I don’t think [they should be] your whole life.”

The success of these Oberlin pianists in the competition has been a source of inspiration and celebration among Conservatory faculty and students alike. Professor of Piano Robert Shannon followed the three Oberlin participants very closely during the competition, along with several other pianists he already knew, and named the competition as a historical moment for the Piano Department.

“I think it’s a really important event [for] the Oberlin Piano Department,” said Shannon. “I’ve been around the Oberlin Piano Department since 1967, and we’ve never had this kind of representation in the Chopin Competition. We never had a faculty member whose student won first prize. And this event was watched by literally millions of people. It’s an unprecedented kind of exposure … certainly for Xiaoyu and JJ, and especially [for] Professor Dang. I really congratulate Professor Dang for his incredible teaching.”

Double-degree third-year Allison To also noted the inspiration and positive influence watching the competition has had on her.

“Watching the competition was extremely inspiring,” she said. “All the pianists’ dedication and hard work really shined through [in] their performances. It was such an amazing experience to be able to listen to the competition virtually and to hear the beautiful music of Chopin being performed by people all over the world.”