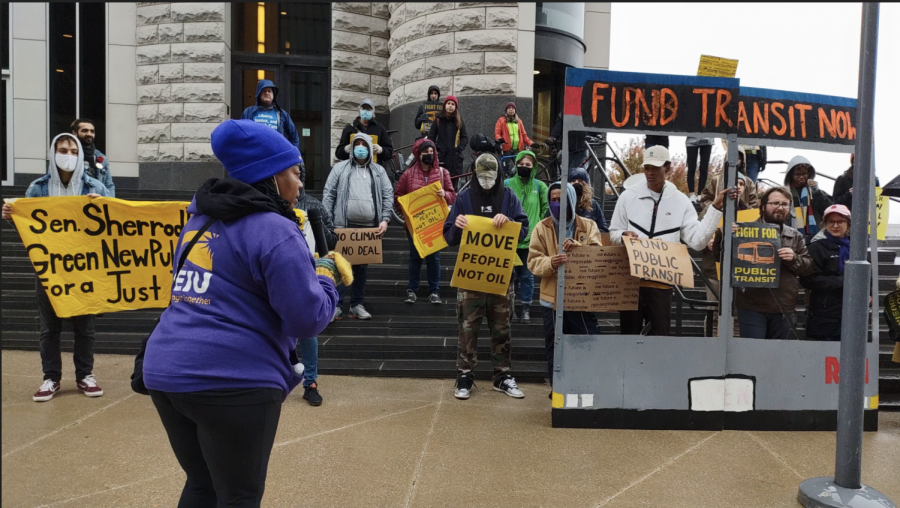 Photo by Loh, member of Clevelanders for Public Transit

Students from Oberlin’s Sunrise hub joined 14 other Greater Cleveland organizations last Sunday to demand increased federal funding for public transportation, which is part of the Build Back Better Act.

The Build Back Better Act will direct $3.5 trillion toward housing, education, climate, and other social programs. Demonstrators protested last week as part of one final push before negotiation on the bill ends this Sunday. To Sunrise’s Ohio chapters, the most important player is Senator Sherrod Brown.

Starting around 1 p.m., the group walked from the Cleveland Public Square to Brown’s office and the Greater Cleveland Regional Transit Authority headquarters. Their march marked the end of a six-month-long organizational effort to support the final legislation on a bill that will include public transit in infrastructure funding.

“We’re making sure Senator Brown, our senator in Ohio who has a big role in the Senate, is urging other people and is making his voice heard [about] how important it is to pass [the bill],” said Courtney Horner, College second-year and Sunrise Oberlin event organizer.

The bill involves $10 billion of public transit funding for the country over the next ten years and is projected to create 10 million clean energy jobs. Horner is hopeful that the legislation will be a stepping stone to greater progress.

“We are fighting for electric buses,” Horner said. “The big thing is shifting jobs away from fossil fuel industries and into these other industries. If we have new transportation jobs, a lot of people who have currently worked in coal mines … can now be trained in these jobs pretty easily. That would also factor into mitigating climate change.”

This sentiment rang clear throughout the protest’s crowd of roughly 60 people. The group retained its energy as the temperature dropped and rain trickled down. Demonstrators continued to sing, chant, and march. Despite the cold, College first-year Natalie Dufour had warm feelings about the rally.

“I think there were 10 or so different organizations there,” Dufour said. “We were all there for a common cause. And even when it started raining, … and it was not a very fun [physical] atmosphere, … the feeling was [still] incredible. No one left when it started raining; no one was like, ‘Oh, we don’t want to be here anymore,’ because everyone was there, united in this common cause to demand equitable public transportation. So it was really, really exciting to be there and to be a part of that.”