In The Locker Room with Susan Robinson-Cloete, Field Hockey Forward and Student Researcher 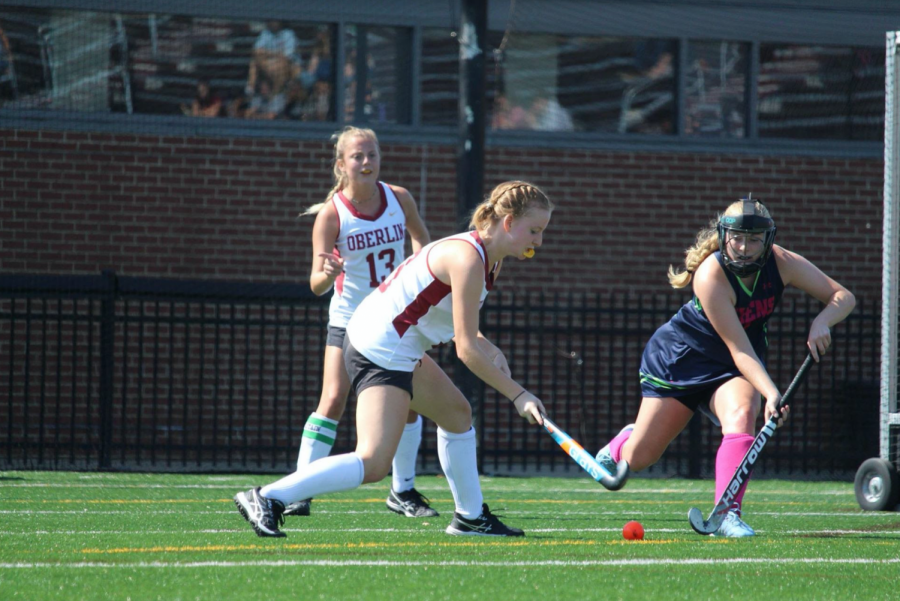 Susan Robinson-Cloete is a second-year on the field hockey team who plays forward and scored the winning goal in the last game of the season. After playing goalie her entire career before Oberlin, Susan was moved to forward for the first time in a field position. The game against Transylvania University was the team’s first win this year. Off the field, Susan is interested in studying Neuroscience and Spanish. Whether she’s volunteering in labs, playing as a forward on the field, or spending time with the team, Robinson-Cloete balances it all.

Congrats on your first win! How did that feel, and what role did you play?

I scored the goal, which was a really exciting moment, but I think a large part of it was our defense. I named them “the brick wall” — second-year Abby Patchen and fourth-years Julia and Lea. They just held it down there for us, and they’ve always been like a back support. I’ve had a really good season, but we hadn’t won any games before this one. Winning a game just made it that much better and that much sweeter. Getting to be in the middle and all the way up there when everybody started to jump up and hug was a really exciting moment.

How did your losses before this motivate you guys to do better?

I think, from each loss, we learned how we need to get better as a team and identified places where we were struggling or didn’t have support for each other. I think for this last game, we all knew what we needed to do. If we really wanted this, then this was the time to listen to all the things that we’ve been learning from each loss and put them all together. If you saw the game or saw clips of it, there was a high level of communication, trust, and cohesiveness between all of us on the field. It was like a synthesis of all of our losses. I think that — it’s corny — but we learned a lot from losing games and learned a lot about the level of play. At this game, we played to our fullest potential.

How have your captains been guiding you through all this?

They all just work so well together. They’ve been really good at giving pregame talks, making sure that our heads are in the right space before we go on the field, and just being there to support us. Lea has always been a force of nature on the field, and just as a defensive player, she’s always been really supportive. She makes sure that the back is taken care of, because they do so much work, and she makes sure that they’re being respected. This was my first season on the field and third-year Vanessa Baker’s too — we were both goalies before playing field positions — and we had a lot of really new movement up there. I think that fourth-year Bonnie Wileman, a senior member of this team, just gave us a sense of calmness up there, and she provided a really cool presence.

How was the adjustment from not having a season last year?

It was interesting. In the past season, we had only ever been practicing. So for a lot of us, the main exposure we had to this sport was playing our own team. When we started playing actual games, — I won’t speak for the whole team — but for me personally, I was like, “Whoa, there is a different level of play out there.” Our team is fantastic, but there’s a different type of energy when you’re trying to beat somebody versus when you pass together. This season, I got to spend time with the team in a really different way — in the locker room and on buses together. My favorite part of the transition from practice to an actual season was getting to know my team and feeling like I actually have a lot of friends.

How have you guys been like bonding off the field?

Well, I think a lot of the bonding happens in the locker room after practice. We’re so chatty. I like to joke all the time, “We need to talk on the field — think about how chatty we are in the locker room or during practice.” When Stevenson Dining Hall was open during preseason, that was a really big thing. We would have team dinners after every single practice. You’d just change, shower, go with a group of people to Stevie, and know that there was gonna be a big field hockey table sitting there. In those first few weeks, we got to talk as a team more than we ever did over the entirety of last year. We do other things like trips to Volunteers of America, which is a thrift store in the area, and we’ve planned some apple picking, a team Thanksgiving, and a team dinner at our coach’s house. But we don’t just bond through organized team events. I love this team so much, and they have been incredibly supportive through some tough times in my life. They are some of my best friends, and I’m very lucky to have them in my life.

What other extracurriculars are you doing at Oberlin right now?

I’m the art coordinator for The Synapse, the science magazine. Right now we’re in the middle of issue 30 and wrapping up issue 29. I just recently started working in Associate Professor of Neuroscience Gunnar Kwakye’s lab, which has been quite interesting. I like being exposed to all these different opportunities. I was doing some work with El Centro Volunteer Initiative, which is part of the reason why I’m taking Spanish this year. I would like to come back in the spring, once I have a little bit more free time, and be a really competent English tutor. Coach has always encouraged us to find things that are outside of field hockey and be well rounded.

How do you manage all of the extracurriculars and your time as a student-athlete?

I’ve had to be really, really honest with myself this year about things that I wanna do, and if I have time to do it. Google Calendar has been really important. I have a terrible memory, so whenever I get something, I just throw it in the calendar. I think about doing things that I really, really love doing. I love The Synapse, and I love spending time in Kwakye’s lab. I haven’t signed up for anything that I wanna do begrudgingly, and I invest time in making sure that I can do each of my extracurriculars well.