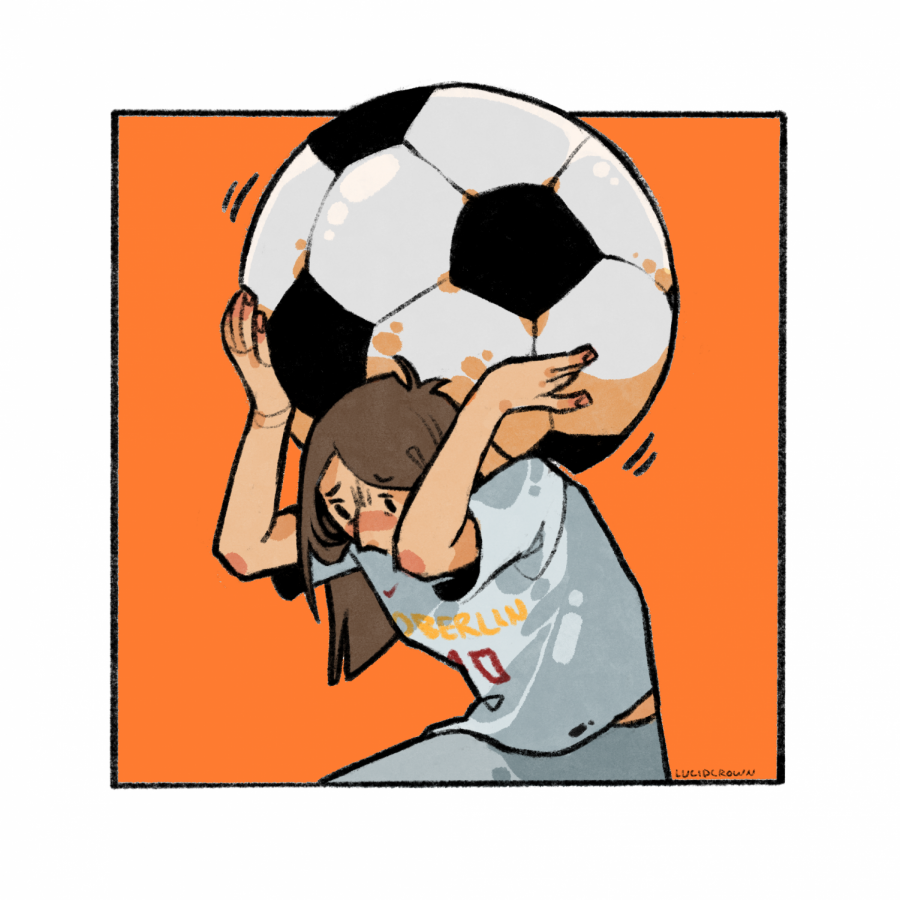 Many athletes take pride in their sports; for many, being recruited and meeting their team was a crucial factor in their decision to come to Oberlin. But for some athletes, all of the cheers and crowded bleachers don’t appear to go much past the field or court for them.

Some athletes feel their fellow students appear to look down on them, as if they’ve taken an easy entry into the prestigious institution and they don’t have the academic capabilities of their peers. This stigma leads some student-athletes to keep quiet about their sport, out of fear they’re being viewed as less than or just another addition to the stereotypes attached to athletes.

Second-year on the women’s soccer team Adrienne Sato, feels especially torn on the subject. Sato believes that due to the stigma around being an athlete, she puts extra pressure on herself to conform in an academic setting, fearing ostracism should she not prove herself.

“When in a context where I’m the only athlete, I feel more pressure to speak up, which leads to less productive conversation because I’m constantly thinking about everything I say,” she said. “But when I’m with other athletes, I don’t have that pressure as much, and instead I worry about seeming too excited about the schoolwork.”

Additionally, Sato looks to athletics as a source of pride, emphasizing how presenting as an athlete makes her feel powerful and capable. However, the stigma around athletes being disrespectful invalidates those feelings.

“I feel like a lot of the students at Oberlin, myself included, kind of rebel against things that are more mainstream and popular, and athletics and people associated with athletics have been popular our whole lives,” she said. “People get really invested in sports, and the Oberlin student body doesn’t have a positive view of [athletes], so I always have to make sure I don’t seem like I care too much about the sport even if I do.”

College fourth-year on the women’s soccer team Sophie Payne believes that the perception of athletics has changed during her time at Oberlin in a positive way.

“As a first year at Oberlin, I was definitely excited to tell people that I was on a sports team because it has been a big part of who I am for most of my life,” she wrote in an email to the Review. “After learning how some people on this campus perceive athletes, I was a little more timid in announcing that I was an athlete. Recently, however, I received a positive reaction in the classroom because people were genuinely interested in how my team was doing which was nice for a change.”

Second-year on the women’s soccer team, Mattie Rie, feels similarly about the preconceptions about athletes, noting how they’ve found it discouraging at times to feel the need to hide their identity as a soccer player.

Rie says  they do not present much as an athlete, but recently  they’ve finally felt comfortable showing their pride.

“I consider it a big part of who I am and who I’ve been,” they said, looking to the welcoming environment at Oberlin as a source for this strength. “The sports teams at Oberlin, especially on the women’s side, are unlike any other sports team I’ve been on, in the best way possible. I don’t mind being perceived as an athlete because I love this team so much.”

Payne added that athletes should learn from the stigma that does exist and work to continue to change the image of athletics on campus.

“My team takes steps to ensure that we create a good environment on our team that will benefit us and others,” she wrote to the Review. “As a women’s team on campus, it feels that we are lumped with the men’s teams, and we try so hard to create our own identity as a team and create change on this campus. I know a lot of really great athletes that are trying to change the reputation of the Oberlin Athletic Department, and my team fully supports this and needs more people to be a part of the change.”

For the most part, the athletic and non-athletic communities of Oberlin remain profoundly separated by their own stigmas of the other, but by opening the door to conversation there is hope that each will see that there is so much more to a person than their outward identity, whatever that may be. Some athletes remain harmful propagators of the stigmas of athletics and the complexes it brings, but it’s clear that the majority in Division III participate in sport out of love, making academics and athletics a priority.