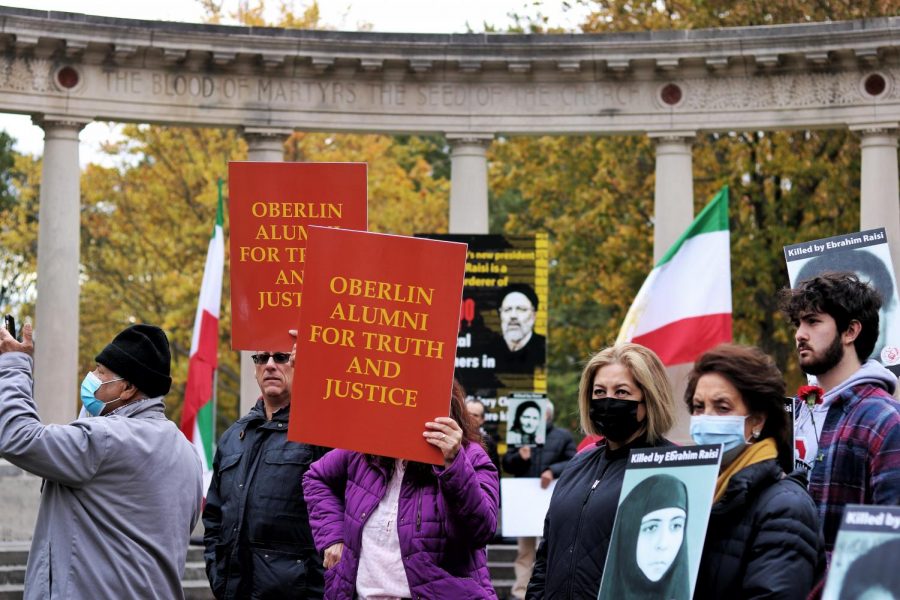 Protesters gathered by the Memorial Arch in Tappan Square on Tuesday to protest against Professor of Religion Mohammad Jafar Mahallati for alleged complicity in 1988 mass killings of political and religious prisoners in Iran.

Protesters from across the country gathered at the Memorial Arch in Tappan Square on Tuesday to call for action against a College professor accused of involvement in covering up 1988 mass political killings in Iran during his time as Iran’s United Nations representative. The protesters called on the College to conduct a transparent investigation on the allegations made against Professor of Religion and Nancy Schrom Dye Chair in Middle East and North African Studies Mohammad Jafar Mahallati, and ultimately, to fire him.

Tuesday’s protest included 16 guest speakers who discussed their personal experiences of abuse and loss at the hands of the Iranian government and a skit that portrayed the executions conducted by Iran’s 1988 “Death Commission.” Protest organizers estimate that the event was attended by roughly 150–200 people in-person, as well as 100 people over Zoom. Lawdan Bazargan, the protest’s organizer and the sister of a 1988 massacre victim, has been vocal in her opposition to the College’s employment of Mahallati since bringing forward allegations against him in October 2020.

Last month, Director of Media Relations Scott Wargo sent a statement to the Review, which stated that Oberlin had concluded an investigation into the allegations against Mahallati and found no evidence to support the claims.

“Oberlin deeply empathizes with the pain and suffering caused by the executions in Iran,” the statement read. “After becoming aware of the allegations against Professor Mahallati, Oberlin initiated its own process to determine their validity. After consulting a number of sources and evaluating the public record, the College could find no evidence to corroborate the allegations against Professor Mahallati, including that he had specific knowledge of the murders taking place in Iran.”

However, activists and members of the Iranian diaspora feel that the College’s investigation did not effectively probe Mahallati’s past. The protesters who took to Tappan on Tuesday included many Iranian Americans who lost loved ones in the 1988 massacre or who have otherwise been affected by the crimes perpetrated by the Iranian government.

Mehdi Keshavarz traveled to Oberlin from California for the day just to participate in the protest. Keshavarz spoke about how he came to the U.S. with very little means in order to escape Iran’s regime.

“A lot of people here came from around the country because everybody lost one of [their] close family members or friends,” he said. “Me, I lost six of my roommates, my friends, … my cousins. Everybody has pain from this regime. We don’t want this guy, Mr. Mahallati, to come freely here and they hire him [at the] College in the United States. They have to see what happened to us — what’s happening right now. This [does] not just belong to the past. It belongs to right now, too. So I hope they can change their minds and make the right decision.”

Bazargan said that the College’s investigation into Mahallati was insufficient. She demanded transparency and called on the institution to delve further into the historical record and publicize its findings.

“It was a sham investigation,” Bazargan said. “How can you investigate like that? Of course they don’t want to get to the bottom of the truth. Nobody wants to accept that they made mistakes. But … we are not going to go away, and time is not on their side. If they think that, by giving us the runaround, they’re going to make us tired — for 43 years we’ve been fighting the tyranny, so we are not going to back off.”

However, Mahallati believes the evidence presented by the protesters does not accurately reflect the context in which his actions took place. The Review obtained a letter that Mahallati wrote to Dean of the College of Arts and Sciences David Kamitsuka on Monday, in which Mahallati argues that the protests against him are politically motivated.

“Now, 30 years after I left a governmental post, the present campaign against me is politically motivated and is a designed, well-orchestrated character attack using abusive propaganda literature,” Mahallati wrote.

Iranian-American College fourth-year Sophie Bernstein expressed frustration about the College’s response to the allegations against Mahallati.

“I think that it’s very unreasonable that the administration has not seen the organizers of this event and I think that [it] is trying to cover up something that is undoubtedly true,” Bernstein said. “I think it’s not correct for him to teach specifically ethics and morals as a professor here, especially when he did cover up mass murderings of political activists. I think that a lot of Oberlin students here, we take for granted the freedoms that we have — for example, questioning authority, questioning the government, being gay, being a communist, … but our people were murdered for that.”

Bernstein was also frustrated that student turnout was underwhelming. “The student turnout is pretty disappointing, especially because we are practicing liberties that Iranian people don’t have to this day,” Bernstein said.

“It’s important to note that although we’re talking about the 1980s, this is still happening to this day with the new election of the president Ebrahim Raisi — he also has been found guilty of killing political prisoners and other people that oppose the Islamic Republic.”

Conservatory first-year Max Stuart said he had heard about the allegations against Mahallati before arriving at Oberlin, and echoed Bernstein’s sentiment regarding the number of students who came to the protest.

“I hope not only does he get fired, but he gets in prison,” Stuart said. “I’m encouraged to see a couple students coming here, but it’s not as much as [it] should be.”

This fall, Mahallati is teaching Muslim Oral Culture: Persian Poetry in Translation, Music, and Calligraphy; Islam; and Forgiveness in the Islamic and Christian Tradition remotely.