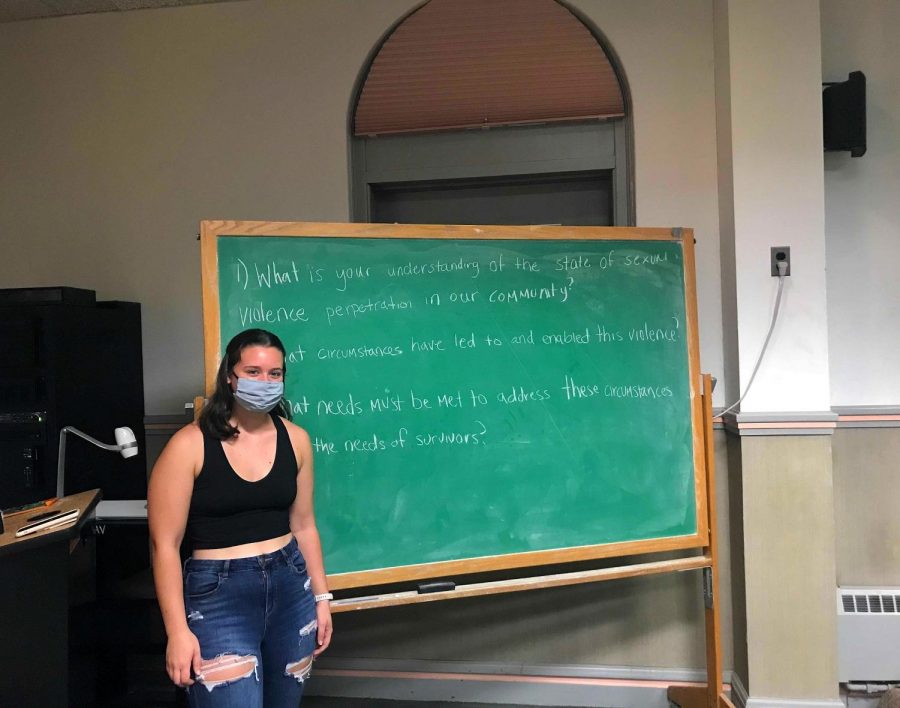 College third-year and SOSHA leader Jenna Frizzell poses in front of a chalkboard that has the guiding questions for last Thursday’s Survivors of Sexual Harm & Allies forum.

Oberlin student group Survivors of Sexual Harm & Allies hosted a forum on Thursday, Oct. 28 to address sexual violence in light of recent Yik Yak posts that directly named and accused specific individuals of sexual assult. The forum began with an overview of sexual harm resources on campus and was followed by a discussion of potential action items that SOSHA could send to the College.

According to College third-year Emma Hart, a SOSHA leader and forum organizer, the group planned the forum quickly in response to the increased discussion around sexual violence on campus stemming from the posts made a few days prior. Hart stated that despite the quick planning process, the event had a good turnout.

The forum included discussions of Oberlin’s current policy and culture surrounding sexual harm and ways to better support survivors. Hart stated that believing survivors and recognizing that sexual violence occurs at Oberlin are the most important first steps the administration and students can take.

“We definitely got into a really abstract discussion about cancel culture and what survivors and abusers both deserve, and what you do if your friend is an abuser, and all these really large questions which are really important to talk about,” Hart said.

The group discussed some specific potential actions, including asking the administration to issue an official statement standing with survivors of sexual harm and to create a rehabilitation program for assailants. Students also thought about their own behavior in relation to Oberlin’s culture surrounding sexual violence.

“Students asked questions about how to do better on campus, which is something that everyone should be asking themselves right now,” wrote College third-year Jenna Frizzell, another forum organizer, in an email to the Review.

“I really like the place we’re in right now where people are talking more about sexual harm on campus,” Hall said. “Sexual harm and sexual violence are topics that are always clouded in shame, and it’s very difficult to talk about. Survivors are silenced a lot of the time.”

College second-year Kendall Heldt, who attended the event, expressed cautious optimism about whether the administration would be receptive to SOSHA’s action list.

“I do feel hopeful with the action plan, and I think that SOSHA is reacting pretty immediately to things that are happening,” she said. “I think they’re doing a great job.”

Heldt also expressed disappointment upon learning about the current state of sexual violence on campus at the forum.

“I did not realize how prevalent sexual assault was on this campus,” she said. “I think that there’s this misconception that Oberlin is such a progressive school and that everybody is so good to each other. We do this consent training, and everyone should understand … consent. But, unfortunately, even at a place like Oberlin, [sexual assault is] still really, really prevalent.”

SOSHA leadership plans on holding a follow-up forum within the next week to solidify a specific action list that the organization can pass on to the administration.

“I really want this momentum to keep going,” Hart said. “I don’t want it to stop with just this initial forum. I know these conversations are really difficult to have — and nuanced and complicated — but we have to have them regardless.”