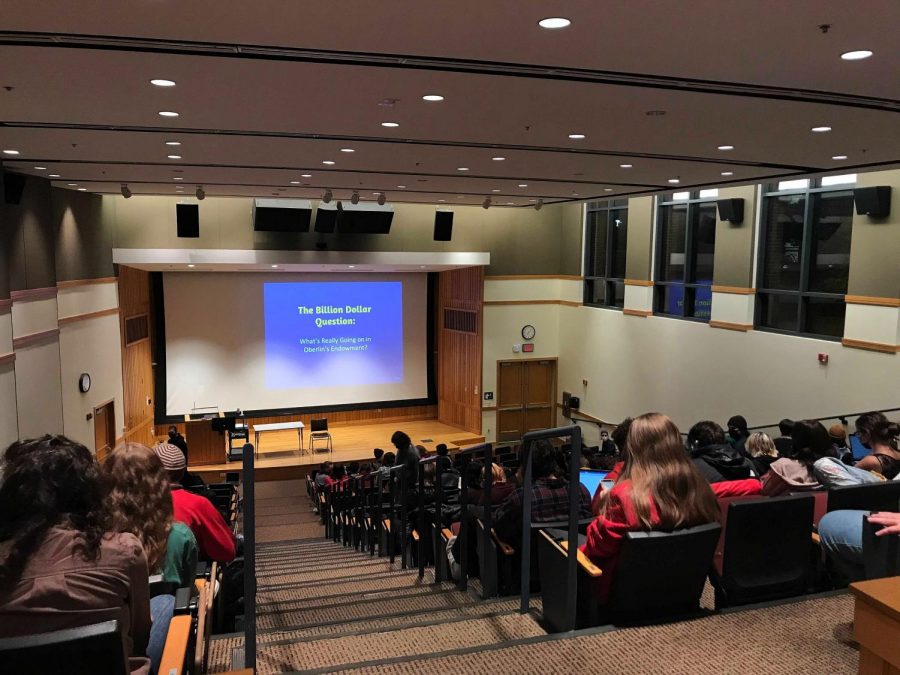 This past Tuesday, the Student Labor Action Coalition invited two financial experts and members of the 1833 Just Transition Fund, Kelly Grotke, OC ’89 and Kris Raab, OC ’89, to present research from their ongoing investigations on the Oberlin College endowment. The talk was titled “The Billion Dollar Question: What’s Really Going on with Oberlin’s Endowment?” SLAC hosted the event in Dye Lecture Hall, where both students and community members gathered to hear Grotke and Raab discuss the College’s $1 billion endowment and recent budget cuts.

This semester SLAC has made an effort to increase their political engagement after the bulk of their organizing, which began when Oberlin outsourced dining and custodial workers in the Spring of 2020, was sidetracked by the COVID-19 pandemic. In the past month, SLAC members have been tabling outside of Stevenson Dining Hall, organizing with United Auto Workers, and generating momentum via outreach on campus and in town.

College third-year Wilson Crook attended the event and expressed their support of the speakers’ efforts to shed light on the College’s financial actions.

“We definitely needed to get the student body talking again,” they said. “I feel like the last year really derailed a lot of action. [It] really showed me how much we need financial transparency from the trustees and also just how much we don’t know about where our money goes.”

In their talk, Grotke and Raab attributed the majority of financial responsibility to the Board of Trustees, whose financial decisions often seem opaque to the students and faculty. Grotke says the board controls appointments to their membership and is largely composed of people with backgrounds in law or finance and who are otherwise unaffiliated with the College.

“No one is in a position to know what has been going on with the money, which is … the motivating force behind all the disappointing and damaging austerity measures,” Grotke said. “To justify the sacrifices that have been demanded of Oberlin students and employees, and before they demand more — which they most assuredly will — the administration and trustees owe you, the Oberlin stakeholders, an independent audit.”

However, Chair of the Board of Trustees Chris Canavan, OC ’84, disputes this claim, stating that information about the endowment performance, the asset allocation policy, the investment policy, and Oberlin’s Financial Report is available on Oberlin’s website.

“We have held at least two campus-wide webinars on endowment management,’’ Canavan wrote in an email to the Review. “The Investment Committee, which oversees the endowment, has faculty representatives, who report regularly to the General Faculty. It is the only board committee with non-trustee members. Plenty of issues merit debate in connection with our endowment. Transparency isn’t one of them.”

According to Grotke, the measures enacted by the College — primarily those of outsourcing union labor, eliminating 25 faculty lines, and making cuts to co-ops and benefits — can be attributed to their positive effects on Oberlin’s bond credit rating. Moody’s, a company that rates institutions like Oberlin, classified the College’s outlook as negative in 2019. Following the implementation of a number of cost-cutting measures under One Oberlin, this rating was revised to a positive outlook.

Grotke, however, explains that the annual $2 million in savings created by outsourcing custodial and dining services is likely overshadowed by the amount of investment management fees paid to financial managers.

“If Oberlin is paying anywhere near $15 million a year or even $10 million a year, this makes all the austerity measures and [money] saved by firing and outsourcing union workers even more horrible, and that [$10–15 million] fee goes directly to Wall Street,” she said.

Grotke and Raab, who, as students, were heavily involved in activism for divestment from South Africa, suggest that the most effective way to combat austerity is to demand transparency. This would allow stakeholders at the College to have leverage in negotiating where money is spent and where budgets are cut.

“I think you, as students, are also exceedingly powerful, because you’re here now; this is your institution,” Grotke said. “You have a voice in this.”