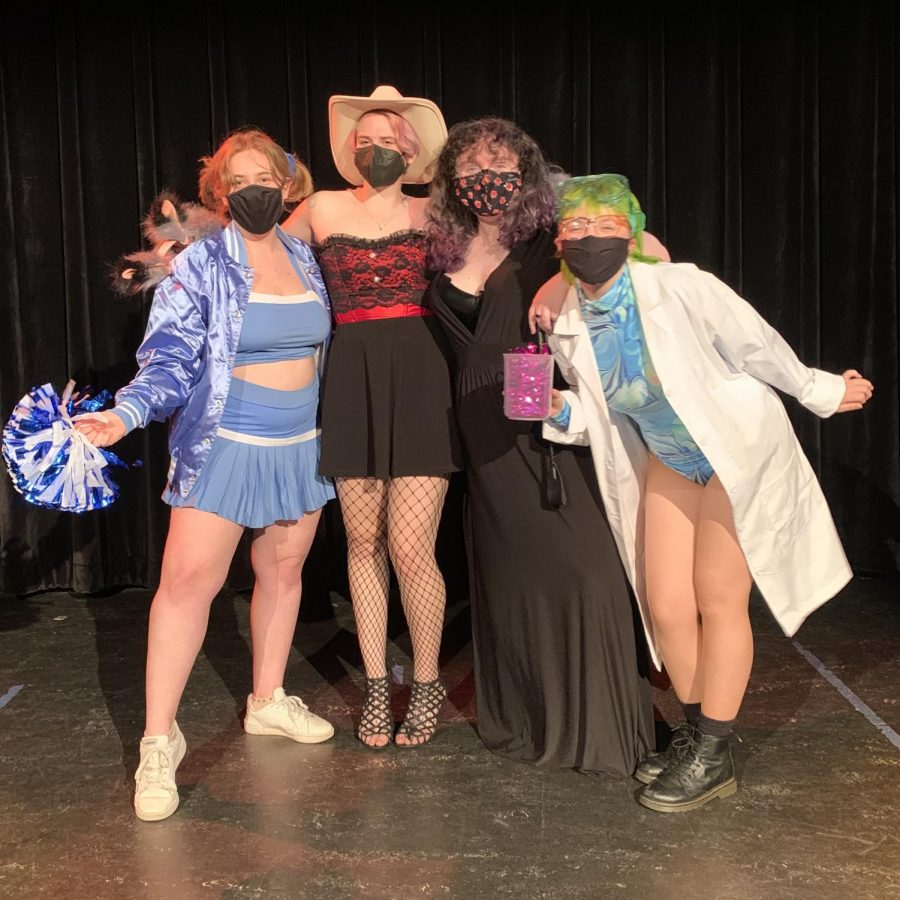 Tonight Oberlin’s sexiest dance collective, Oberlin Burlesque, will return to the stage for the first time in nearly two years. Hosted by the Cat in the Cream, the group’s Halloween Spooktacular performance will feature a plethora of tantalizing numbers, each focused on curating an empowering, intersectional space for performers and audience members alike to explore their sexuality and creativity. For the OBurlesque community, a return to in-person shows signals the group’s revival and, in many ways, a complete reimagining of its ethos.

“I’m doing a mad scientist number,” Pulley said. “I’m not a STEM major; I don’t have anything to do with science. In fact, I break so many lab safety protocols in this routine. But, the concept is a scientist spills their love potion on themselves and starts taking the clothes off. It’s very fun. And I have had a lot of fun with it because I get to be really theatrical. That’s where the fun is for me.”

Another routine, a group performance which includes College third-year Mayan Levin, is a burlesque take on the 30 Rock song “Werewolf Bar Mitzvah.” At the group’s dress rehearsal, Levin reflected on putting the piece together.

“We’ve been mapping out steps pretty easily, and it’s been so much fun,” they said. “I’m feeling really glad that I’m doing a comedic piece, rather than a purely sexual one because this is my first performance. But everyone is so welcoming; it’s so nice and comforting to hear all of these screams of encouragement. Even at this tech rehearsal, every single time someone performs you just hear screams from around the room.”

Spooktacular will be the first performance for the majority of the group’s members, including Levin and Pul- ley. OBurlesque’s last show, the Early Spring Show, was scheduled for March 17, 2020 but was canceled when the entire student body was sent home due to the increasing threat of COVID-19. Only a few members remain, most of whom now hold leadership positions within the organization. College third-year and OBurlesque President Skylar Cohn remembers the chaotic week prior to the performance’s cancellation.

“I performed a ‘Santa Baby’ number in the Winter Holiday Show,” Cohn said. “By the spring, we were preparing for St. Patrick’s Day and the spring show. In that last week, there were so many emails … going back and forth — the show’s canceled, now it’s back on, it’s canceled, now it’s on. It was insane. Literally the day before is when they were like, ‘Okay, it’s officially canceled. We all have to go home now.’ It was all just so disappointing.”

Even though the group held regular Zoom meetings throughout quarantine and during each of the previous semesters, College third-year and OBurlesque Treasurer Sarah Mia Liberatore felt OBurlesque wasn’t the same without in-person performances. Opportunities for the group to come together and celebrate their bodies, sexualities, and talents are crucial to its mission, they said.

“The Zoom meetings were great; they helped build community and were good for educating,” Liberatore said. “But, nothing compares to being in front of people again. That is the core of OBurlesque.”

Cohn agreed, remembering a few moments when in-person performances made them feel seen and heard in a way they had never experienced on campus before.

“I’ve seen so many people on stage,” Cohn said. “My first ever show that I saw, I saw someone performing with the same insulin pump that I have. That was a re- ally affirming, incredible moment for me. … It made me feel seen as someone both who has an insulin pump, but also as a sexual person. But burlesque isn’t just sexual; it’s an art form. And it means a lot to me. In-person performances give us that time and space to celebrate each other.”

For Levin, Spooktacular offers a forum to explore their sexuality in new ways.

“OBurlesque was one of the first events I attended during my first year,” Levin said. “It was so crazy and beautiful to see that this was something that existed and was a big deal on Oberlin’s campus. As an individual, I’m pretty open about my sexuality, but I’ve never seen myself as someone who would go on stage; I thought I would always be a spectator. But now, to be able to be visually present in my sexuality rather than just intellectually, it just feels really great.”

While Cohn and Liberatore both think the club depends on the energy inherent to in-person performances, they also believe that the Zoom meetings held under former OBurlesque leadership were instrumental in fostering a new sense of community and camaraderie within the group.

“[There were] weekly meetings over Zoom which was something new for OBurlesque because normally there was just one general interest meeting, tech rehearsal, and a show,” Cohn said. “Those were the only meetings throughout the year. But now, it’s become more of a community. We had talks from alumni who have actually gone on to be in the burlesque industry in the real world, like in Cleveland. We had DIY days. We had days talking about the history of burlesque, days about body positivity in burlesque, and about the intersections of drag and burlesque — really informative talks and discussions that were really driven by the members saying, ‘Hey this is what’s important to us; this what we want to talk about.’”

While there were over 30 people at this year’s dress rehearsal, Liberatore says that almost no one came to watch each other’s routines in past years.

“People would come to practice their acts, some of the [the crew] might stick around, but most people would just head out after they rehearsed,” Liberatore said. “This year, everyone just stayed to cheer every- one on. I remember, back when I did my first dress rehearsal, there were like three people in the audience: the president, the vice president and the treasurer. We didn’t really talk with fellow cast members. But now, it really feels like we’re holding up a whole team. We’re starting from the ground up.”

This year, OBurlesque is bringing in a slew of professionals to assist with the show.

“This time, we have designated costume and makeup helpers,” Liberatore said. “We have a lot of [crew members]. … We have a designated photographer and videographer. You know, we have a community, and we’re all staying here, supporting each other, cheering each other on, and it’s really incredible.”

This newfound sense of community offers a vital opportunity for OBurlesque and its leadership to redefine the group.

“Since this is our first performance in two years, we’re kind of rewriting some aspects of the club,” Liberatore said. “We’re asking ourselves, ‘What do we want this to be? How can we change?’ We want to create a united space where anyone, regardless of any background, can feel comfortable and safe trying something new.”

For Pulley, the group is about so much more than performing.

“Obviously, it’s about burlesque,” Pulley said. “But more than that, it becomes about the people who are doing it with you. It’s about support, it’s about excitement and enthusiasm for the people around you.”