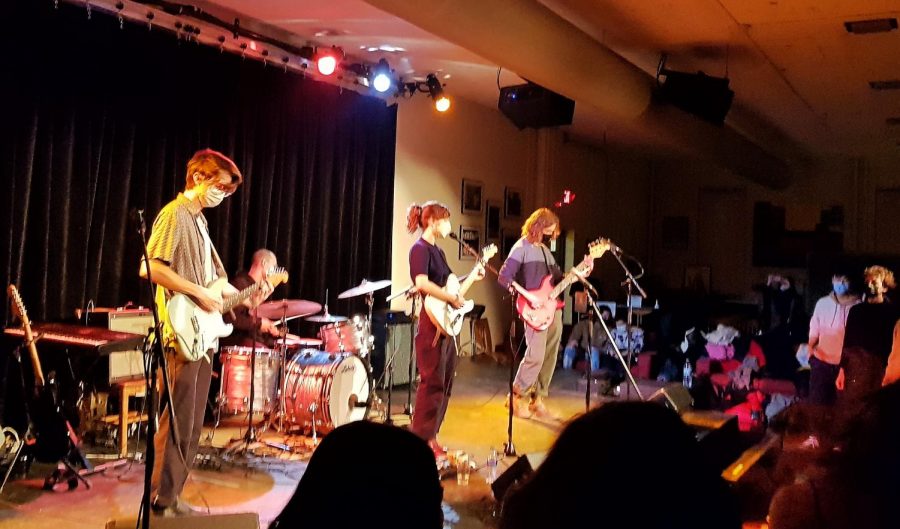 On Monday, Nov. 29, the Cat in the Cream hosted indie rock band Slow Pulp with an opening performance from Oberlin student band Boxed Whine. Hoping to increase event turnout and revitalize the campus music scene, the Cat is making a concerted effort to showcase more student talent at their performances.

College third-year, Hillel Hinton-Williams is a manager and booker at the Cat. Over the summer, Hinton-Williams learned an effective strategy for boosting event attendance: use student bands as a magnet for additional friends and attendees. His method worked again on Monday, drawing around 160 concertgoers, nearly double the average usual turnout.

“I wanted to have a student opener so we could make sure we get a bigger crowd to come in,” Hinton-Williams said. “Everyone is aware of the stu- dent bands that are playing. They have friends and groups that they invite.”

This Monday’s matchup of Slow Pulp and Boxed Whine fell into place naturally. Months ago, Slow Pulp’s agent reached out to Hinton-Williams about playing at Oberlin. Hinton-Williams had seen Boxed Whine perform and was eager to bring them to the Cat, so he offered the group the opportunity to open for Slow Pulp. For most of the band’s members, it was their first chance to share the stage with a professional band.

Jeanne Hill, College fourth-year and lead singer of Boxed Whine, was thrilled about this gig.

“I had never opened for a professional band before, so this was a pretty exciting opportunity, especially because I had already been a fan of their music,” Hill said.

Eamon McKeon, College fourth-year and lead guitarist of Boxed Whine, also excitedly anticipated the set. He especially appreciated meeting Slow Pulp’s band members — all musicians around his age who have dedicated their lives to their band. At first, he was intimidated by the prospect of performing alongside a professional group, but felt comfortable as soon as the show began.

“It felt really cool to have that sense of a partnership with another band,” McKeon said. “It was very humanizing to be like, at the end of the day, we’re all just people.”

While the event was headlined by a professional band, the show equally highlighted the student group. After a year and a half of restrictions, excitement to see student performers again has grown around campus. Since the COVID-19 pandemic, however, McKeon has noticed a shift from his first year. Come graduation this June, there may be just a handful of bands remaining.

The Cat is working to avoid this predicted absence. As one of Oberlin’s key performance spaces, it has a strong musical influence on campus. Managers are actively drawing in more student bands and helping to boost awareness of these bands around campus.

“There’s a conscious effort to get younger stu- dent performers inside the Cat in the Cream,” Hinton-Williams said.

In the hopes of promoting student bands, the Cat is hosting a “Battle of the Bands” from 8 p.m. to 10 p.m. on Dec. 11. Students can register their band to compete in a campus-wide musical competition in front of a live audience.

Student bands gain traction by performing in student spaces and rely on peer support to get their names out. Hinton-Williams is fighting for the student music presence on campus to return, something he was only able to experience for one semester during his first year. Hill is focused on encouraging everyone to participate in campus music culture, bringing other students into rehearsal spaces and house shows in an effort to show them how welcoming and supportive the scene is.

By performing in student spaces, Boxed Whine hopes to act as a role model for younger students.

“I want to see more music on this campus,” Hill said. “I hope that after this show, first-, second- and third-years feel comfortable approaching us and talking about the Oberlin music scene — if I knew of any younger bands, I would totally hit them up to play at my house!”