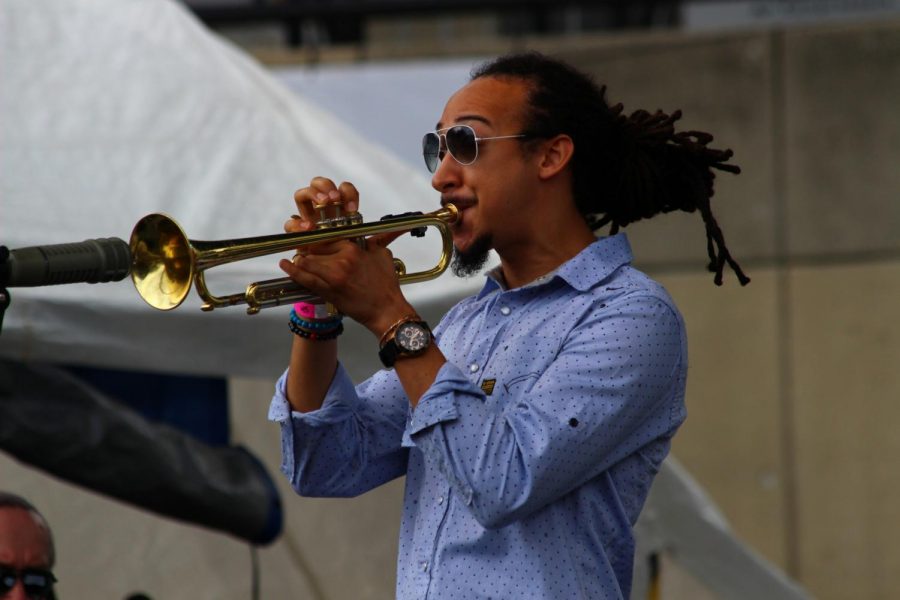 What intrigued you about the trumpet?

It’s just brass. To me, the trumpet has a lot of dynamics to it. It always had a lot of expression. The trumpet players I first was hip to — even before I was into jazz or playing trumpet — were my grandfather, of course, and also people like Dizzy Gillespie, Lee Morgan, Clifford Brown, and Miles Davis, those kinds of sounds. To me, even the Gloria Estefan album Mi Tierra just struck me and pulled me in. My older brother played the trumpet for a while too, and I used to want to do everything my big brother did, so I used to sneak into his room and play his trumpet.

I transferred before the last two years of high school to a school called Douglas School of the Arts in Jacksonville, FL. That’s where I met Scott Dickinson, Wilbert Neal, Jamison Ross, Larry Wilson, Alphonso Horne, Ulysses Owens Jr. — cats like that. We were all classmates up there. I went there because that was the compromise to me not running away from home to go to New York at 15. Florida’s got a crazy music education program. The public schools are pathetic, but it’s amazing how good all the music programs are. I know a lot of great educators here.

What were some of your early influences outside of the trumpet?

Musically, some of my early influences were people like Björk. I liked her album called Vespertine. When I first heard that album, my mind im- mediately opened up to more electronic music; before then, I wasn’t tryna hear that. People like Outkast and Mos Def were influences as well. I grew up hearing rap, hip-hop, and R&B on the radio — that’s what we generally listened to in my family — but hearing the Outkast album Aquemini, the Mos Def album Black on Both Sides, and the one that came before that pulled me really into deep hip- hop. Not that Tupac wasn’t deep, but Tupac and Biggie — we heard them on the radio. That was culture music, our Black cultural pop. I got deeper into the underground, things like Black Star, Slum Village, and eventually Wu-Tang Clan. The way I learned music in my household was listening to records. My brother was really into hip-hop, R&B, and electronic music. My father was really into classic funk and soul: Earth, Wind & Fire; Parliament-Funkadelic; Donald Byrd’s Street Lady; Gato Barbieri; John Coltrane’s A Love Supreme. That was his language: the real straight-ahead jazz and the funk soul era. My mom was really into Latin music and Stevie Wonder. Apparently she was into The Beatles, too, but I think she kept that to herself.

Which faculty members impacted you the most during your time here?

There’s really influential people there like Justin Emeka. Super influential! He did something really important at the time. I used to live in Afrikan Heritage House, and I remember when Justin Emeka came to the College and started a Capoeira class. He had a general one but also another one for maybe just six, seven, or eight Black, male students. The whole part of it was his wanting to foster and develop our Black manhood. He pushed us harder than any other class and instilled in us a lot of values on being powerful, young, Black men. Another person would be Theater and Africana Studies Professor Caroline Jackson Smith. She was super influential on my mind and mentality. I took a film class with her, and though I didn’t know what I’d be getting into, I’ve still got 15 books from her class. She really helped me understand Black cinema. Being welcomed and allowed to study in that circle of academia, being respected there, having to write papers, and being tasked to maintain all those things really influenced me to not be afraid to step outside of music.

What inspired you to create an Afrocentric album? How did you come to this concept?

Well, I think the concept of Afro-centrism is false at its core because the whole world copies Black culture and is influenced by Black culture. You can walk into a coffee shop in Williamsburg and be surrounded by wealthy white people listening to Biggie Smalls. It wasn’t really Afro-centric, and it wasn’t me really thinking about “Africa” as much as me trying to not avoid the truth that this is Black-influenced music. It’s always gonna be Black music, and I think I was just embracing that. Conceptually, I wanted to make an album that played like a movie, and the most popular story in any movie is the hero’s journey. That’s a classic format for a movie — this would be a great conversation to have with Caroline Jackson Smith. Me knowing that stuff and having an understanding beyond the origins of Greek mythology is actually Keynesian spirituality. I thought I’d take inspiration from the original hero story, the hero who took the eye of Horace and became Ra, which is actually the story of humanity and how humanity evolves into divinity. It’s the story of how you die and become God of your own universe, which is like every Marvel movie you’ve ever seen! It’s Eternals, Thor, Star Wars; I wanted to do that musically.