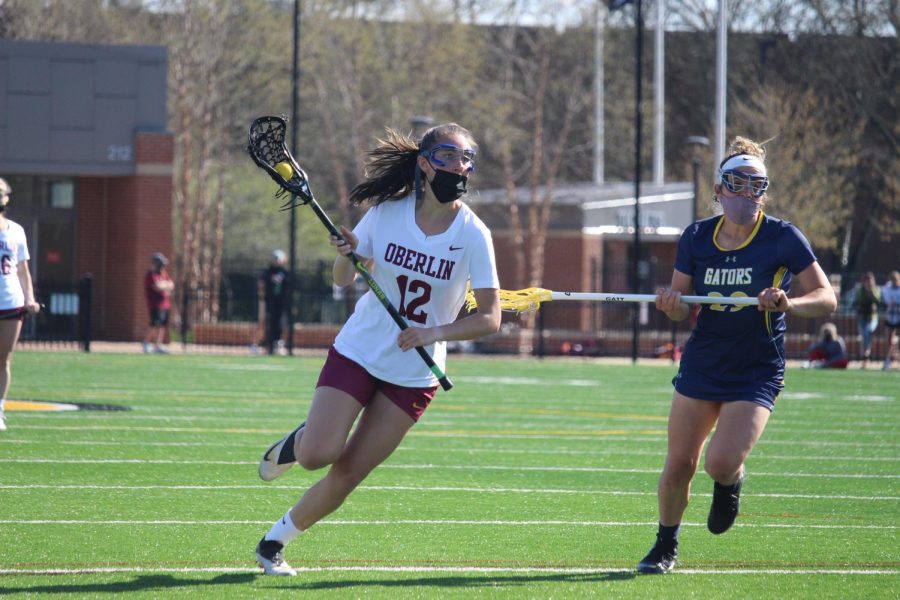 Maya Blevins cradles the ball up the field.

For this upcoming Winter Term, the women’s lacrosse team will be traveling to Florida to train and play their season opener. While this is a great opportunity for the squad to travel together and start off their first regular season in the past two years, many second-year players point out that this was not what they had expected their Winter Term project to look like.

Spending Winter Term on campus might be particularly disappointing for second-year student-athletes, who did not get an opportunity to do an individual Winter Term project of their choosing during their first year. Last year, incoming first-years were required to enroll in the Critical Skills for New Obies project in August. Second-year on the women’s soccer and women’s lacrosse teams Maya Blevins did this mandatory summer Winter Term project and spent January at home.

“My freshman year I was not able to create my own Winter Term project,” she said. “This was because they changed our freshman orientation to be in August over Zoom. This included at least one Peer Advising Leaders (PAL) meeting a week and multiple seminars. This was helpful, but I wish we had the opportunity to learn this stuff on campus and in person. It felt like more of a chore rather than a chosen Winter Term project.”

Abbie Patchen, a second-year on the field hockey and women’s lacrosse teams, was also required to enroll in the Critical Skills for New Obies project.

“This was mostly completed before I came to campus and was entirely on Zoom,” she said. “I spent the break that normally would have been Winter Term at home.”

This year, the athletes on the women’s lacrosse team will participate in a Winter Term project titled Relaxation, Joy, and Flow. The project is being sponsored by Head Women’s Lacrosse Coach Kim Russell for the entire team. In between practices and strength training, the team will be practicing yoga, learning breathing techniques, and participating in community service.

Patchen says that the team will be returning to campus at the beginning of February and traveling to Florida to train for preseason and compete in their first game. She feels fortunate to be able to get out of the Oberlin cold and says she’s looking forward to spending some time in the sun with her teammates.

“I’m excited to spend time with my teammates without the distractions of classes and other activities,” she said. “We haven’t had the opportunity to go on any trips together yet and many alumni and upperclassmen have talked about those trips being some of the best bonding experiences they had as a part of the team.”

Second-year Emilie Jones, also on both the field hockey and women’s lacrosse team, says that Winter Term was a huge factor for her in deciding where she wanted to commit for college.

“I didn’t find a similar thing at any other school I looked at, so I thought that the opportunity was really incredible, especially because it seemed like you could really make a fun project out of anything that interested you,” Jones said. “I remember people telling me Winter Term tales about skiing or baking at home and then some others on visiting a different country and having all of these amazing adventures. I definitely didn’t see the pandemic coming so I had a lot of ideas and expectations about it, but I would say I think that the school has helped us out a lot, and I really can’t wait for this year.”

“I definitely did not expect this to be my Oberlin Winter Term experience,” Patchen said. “When I was learning about Oberlin I remember being given advice about the three Winter Terms: do one for yourself, one for your career, and one for your community. That really stuck with me and was what I had planned on pursuing. However, after this year I will only have one more to complete and so far I have not done any that I set out to do.”

Although Jones knows this was not the plan she initially had anticipated, she is simply grateful to spend time with her friends and travel despite the chaos and restrictions the pandemic has caused.

“I think last year’s restrictions on Winter Term for first-years was really difficult, so having the chance to spend time with my team and go on a trip with them is super fun and exciting,” she said. “I think that the school is really doing its best under these difficult circumstances, and I think if the pandemic taught us all something, it’s to really cherish the time that you get in these four years, especially with a team that’s essentially a second family.”