In The Locker Room with Phoebe von Conta, Fourth-Year and Track Star 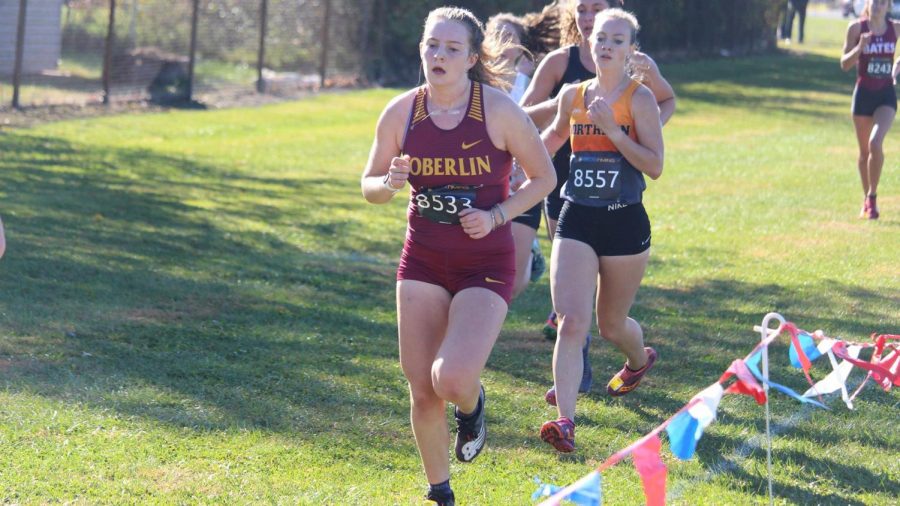 On Monday, College fourth-year Phoebe von Conta was named North Coast Athletic Conference Women’s Indoor Track Distance/Middle Distance Runner of the Week for the second week in a row. With an impressive cross country season, von Conta is leading the conference with a ranking of 25th in the country in the 3,000-meter event with a time of 10:42.08. The NCAC also recognized her last week when she placed first in the mile in her season-opening indoor track meet with a time of 5:25.07, the best in the region and conference and 13th nationally. Off the field, von Conta participates in co-ops and holds leadership positions in the Green Edge Fund and the Spanish in the Elementary Schools program.

You’ve had a great cross country season and you were recently named the NCAC Player of the Week  for the second time — how does that feel?

It’s fun to celebrate the end of cross country in the indoor context. Going from cross country to track is always a quick transition for me, but I’ve never had a complete season for cross country before because I’ve been injured for the past two years. I’ve had intermittent seasons, so this was the first cross country season where I was able to compete in every race — I never had to take time off, which was really a big deal. As an injured person, I went through so much in prior cross country seasons, and it was really nice to do something completely. Moving indoors, there was so much momentum that we all had from a really wonderful season. I was able to carry that to the two races that we had, which were very fun and kind of shocked me into the right mindset for track. Now I’m on my two-week break, and then we’ll start again next year.

During your time at Oberlin, have you been involved in any organizations or communities other than athletics?

I’ve been involved in organizations for each of my majors, Environmental Studies and Hispanic Studies. For Environmental Studies, I’ve been on the board for Green Edge Fund my whole time as a student at Oberlin. I joined in the spring of my first year, and I’ve held a bunch of different positions since then — right now, I’m the treasurer. In the Hispanic Studies department, I’ve participated in the Spanish in the Elementary Schools program for a while. I did a year of teaching in person, and then I did it remotely during my third year. Now for my fourth year, we’re back in person, and I’ve been able to take a leadership role in that and oversee the student volunteers. It’s a really sweet group of people, and I love getting to know the Oberlin community through the program. I try to be involved in different student organizations and I’m also part of a co-op.

How long have you been running cross country?

I’ve been running since seventh grade.

What made you get into it and decide you wanted to run in college?

I was pretty dead set on a few different schools in my area, and hadn’t thought about going to the Midwest cause I’m from the East. I got recruited for Oberlin’s cross country and track team by the coach. When I received the letter, I put it in the recycling bin and almost moved on. My mom fished it out and was like, “You should really look at this school. It’s kind of wacky.” I did, and I came here and  visited, and I fell in love with the team and the community at Oberlin. It was the most perfect day — everything aligned. After that, I knew that Oberlin would offer me a space to be someone who’s passionate about the studies I’m doing here along with being someone who can run and push themselves in a more competitive context with people who are doing something similar. I also wanted to be connected to the music opportunities here, which I feel a lot of people at Oberlin are attracted to. I found that every other space I went to, it was like “You’re an athlete or you’re something, or you’re this; you can’t be all three.” I found that Oberlin offered that for me.

As a fourth-year, do you feel you got a fulfilling student-athlete experience despite the lack of a regular season last year? What is your future after college looking like?

It felt like having a pause in the middle of everything; it was startling and I don’t necessarily feel like I’m done yet. It’s very weird because I was injured my first and second seasons of cross country, and then had no season my third year, so I do feel that there’s unfinished business, but I’m satisfied with the way it’s gone. I’m grateful for the time that I have now to see it through, especially with the team I’m with. As far as my future after college, I would really love to take a break before going back to school because four semesters straight is kind of a grind. I’m just applying to some fellowships and seeing where that takes me. I have a lot of different ideas. We’ll see.