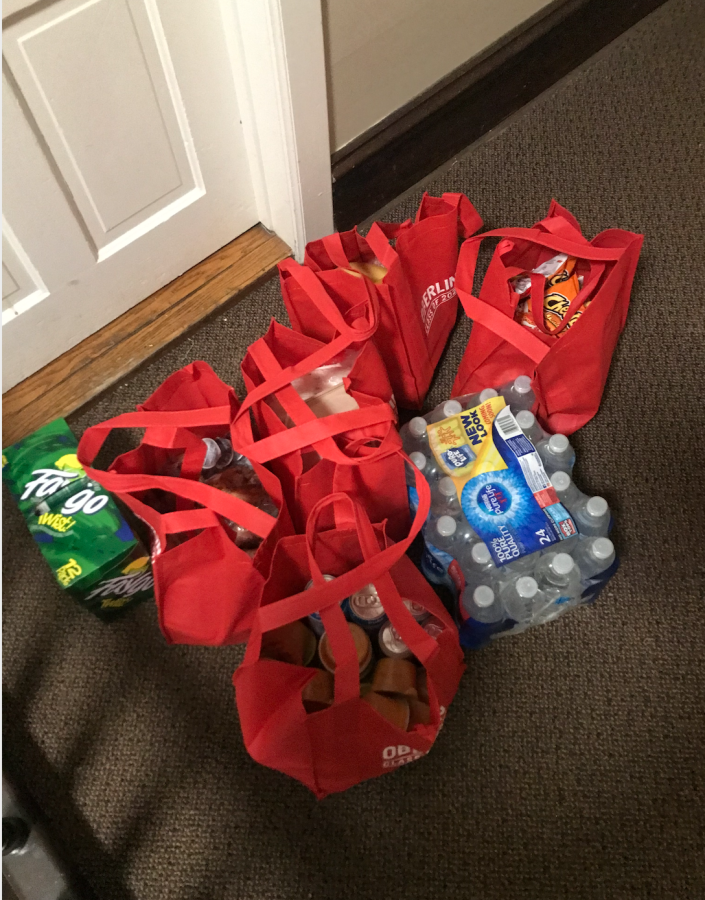 A student’s welcome package is delivered to their door as part of AVI Foodsystems’ food delivery program for students in isolation.

At the start of winter break, 150 students remained on Oberlin’s campus in isolation for COVID-19, prompting a campus-wide effort to care for the sick students. In response to the spike in cases, AVI Foodsystems rapidly developed a meal delivery service for the break, and administrators worked to provide support to students. However, many students felt that the services did not meet their needs.

Due to the suddenness of the outbreak, AVI had to quickly change its priorities and determine the best way to distribute food while the majority of its staff and administration was already away for the winter break. Despite the short notice that it needed to not only serve meals to a significant number of students, but also do so via direct delivery, AVI managed to put together a food delivery program.

“Everything happened so fast,” said Vice President and Dean of Students Karen Goff. “They had to really pivot and really think in terms of the volume, with over a hundred-and-something meals a day.”

One approach AVI developed was to make a care package for each student. Upon entering isolation, each student received a “welcome package,” consisting of snacks, water, and juice. After sending their name, room number, T-number, and allergies to the Text-A-Manager line, each student would then begin receiving meals for their 10-day isolation period.

Despite the effort put in by AVI, some students found these meals — delivered two to three times a day — inconsistent, cold, and, at times, inedible.

“I would get a meal around 10:30, and that was breakfast,” College first-year Cece Blake said of their experience. “I would say breakfast was the only meal that was, for me, enjoyable. Tater tots, scrambled eggs — it was always cold, but whatever. Lunch was brought around 2:30 and dinner around 6:30. The first dinner that I got was a beef stew with potatoes; there was also some red cabbage looking thing. It was inedible. … It was just awful, and I ended up not eating a lot. I would have breakfast, and that was pretty much all I could really do.”

College second-year Makayla Riggins described their disappointment in the quality of the meals as well, noting that they had particular difficulty with receiving gluten-free accommodations.

“Every day, they would give me two meals, except the one day they didn’t give me any,” Riggins said. “Usually, the meals were very mediocre. There were a few days where they just gave me salad. It was pretty obvious that they had a lack of gluten-free options in general. … There was one day where they didn’t make it gluten free. My instinct said it wasn’t, it seemed like it had soy sauce in it.”

The overwhelming uptick in cases heading into winter break forced AVI to pivot to a food delivery system on a larger scale than ever before. AVI employee Simone Hammett-Lynch, OC ’21, described how the workload changed dramatically when cases began to spike.

“The first day that sit-down dining was closed … was a really weird vibe because usually we’re super busy and it’s super loud,” Hammett-Lynch said. “We were busy, busy, busy, and luckily there’s a lull and my manager just comes in and says, ‘Simone, I need you to make 25 grilled cheeses right now.’ That was really when it hit me how fast things were happening.”

Hammett-Lynch described how most workers didn’t have basic knowledge of dorm locations, and options for transportation were slim.

“The first night we didn’t have a vehicle, so the manager who was working went to a random custodian and said, ‘Hi, we need to use your pickup truck,’” Hammett-Lynch said. “We didn’t have a warmer, so we threw all the boxes directly into the back of the pickup truck. That’s why the food was cold.”

Goff commended AVI’s quick response to the high number of isolated students, noting that the issue of transportation was a part of AVI’s “contingency plan.”

“We were going to put out a call for people to volunteer and help, but we didn’t need it at that particular time,” Goff said. “Coming back from the break, that was one of the first things we did — put a message out to the community and say, ‘We’re gonna need staff, faculty and students, whomever, to help deliver meals.’”

Dean Goff appreciated AVI’s quick pivot, noting that the complaints made about food came from a very small fraction of students.

“I have to say I was really, really impressed,” Goff said. “Overall, I think they did a phenomenal job considering the time, during break, and the volume. With that said, were there some areas that I thought we could have improved? Absolutely. We had a couple complaints, but when you think in terms of serving over a hundred plus meals, with minimal complaints, you address them, but you don’t lose sight of the bigger picture.”

As the winter shutdown went on, AVI had to constantly change direction for greater efficiency.

“We started prepping meals a half hour earlier to get the meals out earlier, and dividing the boxes by quadrant to make it more efficient,” Hammett-Lynch said. “All these little things went on behind the scenes to make the best of the situation.”

On Christmas day, AVI attempted to deliver special meals to make up for students’ inability to celebrate with their families over a home-cooked meal.

“I like to give credit where credit is due, and I really think they stepped up, even during the holidays — specifically on Christmas, when they made a special meal,” Goff said. “They didn’t just deliver what they would have ordinarily delivered. … They recognize, you know, students would otherwise probably have been having a nice, wonderful meal with their family. And they’re just not getting a chance to do that. So kudos to [AVI].”

Despite these efforts, many students did not see the special meal that was promised. This created extra challenges during an already stressful time.

“The only meal that I got on Christmas was a salad; it was lettuce and tomatoes and carrots and there was no dressing,” Blake said. “That was brought at 4:30, and there was nothing for the rest of the day. It was really difficult because I was hungry, and it was Christmas, and I was already so down that I wasn’t going to be able to be with my family. … I don’t know if [AVI was] doing the best that [it] could do, but … my experience with the meals during isolation was just so awful.”

For AVI staff, the work of providing meals, especially during a holiday break, was taxing. Staff at all levels of AVI worked extra hours to try to ensure that students were taken care of during their isolation period.

“We were overwhelmed and doing the best we could with what we had,” Hammett-Lynch said. “There was a general, very palpable anxiety in the air the first night that things really blew up, and the management really went above and beyond to do the best they could. My manager came in at 8 a.m. and was writing names on all the boxes. I think a really important thing is that the team really tried to be receptive and make adjustments where they were needed.”

Representatives from AVI could not be reached for comment.