Remembering Archbishop Desmond Tutu and His Words at Oberlin College 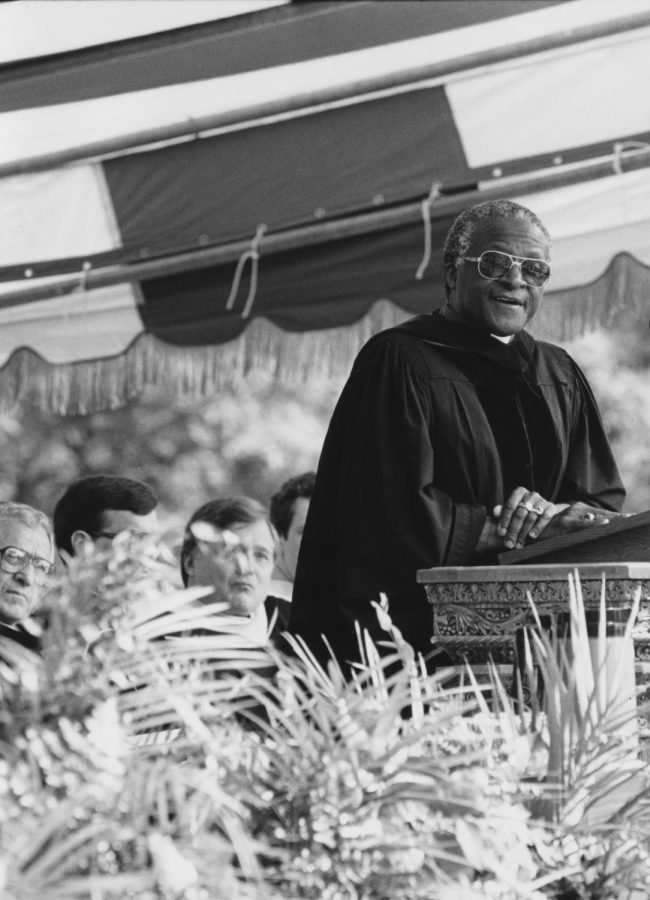 Courtesy of the Oberlin College Archives

On May 26, 1987, Oberlin students filed into their seats for Nobel laureate Desmond Tutu’s Commencement speech. Tutu, who died Dec. 26, 2021, was a South African Anglican bishop and theologian who fought against Apartheid. By emphasizing nonviolent protest and economic pressure on South Africa, he helped connect the world in fighting for human rights.

“Oppression dehumanizes not only the oppressed but, perhaps much much more, the oppressor,” Tutu said in his speech. “When we say we are going to be free we are not concerned just for Black freedom we are in fact concerned for white liberation … it is impossible to have sectional freedom. The only way we can be free in South Africa is together … the only way we can be human is together.”

Following the elections in South Africa, which strengthened former President P.W. Botha’s administration, Tutu addressed Oberlin students on the battle against Apartheid and confessed his fears that his homeland would never be free from it. However, Tutu highlighted the American college campus’ support for his cause as many students protested against Apartheid through the divestment campaign. Oberlin’s campus was the site of this kind of political action, with student activism for divestment of the institution’s endowment in South Africa-related stocks beginning as early as 1985. Weeks after Tutu’s speech, the Oberlin Board of Trustees voted to divest.

Some student protesters at the commencement ceremony wore red armbands to reject the College’s current investment policies. Others held signs with the names of those imprisoned because of their political views in South Africa. The outcry from students across the United States helped convince Congress to divest from South Africa in 1986, which was a significant factor in helping dismantle Apartheid.

“They were able to transform the moral climate in this country, to the extent that an unwilling president was forced to impose sanctions,” Tutu said in his speech. “And I would just want to be able to say thank you to you young people, for you are indeed the hope of the world.”

Tutu died from cancer last month at the Oasis Care Centre in Cape Town. The loss left many remembering his legacy and his impact on the present generation — including those who attended his Commencement speech at Oberlin.

“The 1984 Nobel Peace Prize winner was the Commencement Speaker at my graduation from Oberlin College and a leader and true inspiration in the Global Racial Justice movement,” said Congresswoman Yvette D. Clarke, OC ’87 in a press statement. “I have powerful and indelible memories of Archbishop Tutu’s passion for justice as Commencement speaker. This would be the first of several encounters with him over the years. He was truly an inspiring leader.”

The Rev. Gawain de Leeuw, OC ’91, stated that Tutu’s legacy as a priest and human rights activist could promote discussions of spirituality in tandem with social justice.

“I think that we have an opportunity to really rediscover the connection between spirituality and social change in a fashion that can incorporate the possibilities of reorganizing congregations and institutions in such a way that they can be truly responsive to the needs of this age,” de Leeuw said.

Desmond Tutu advocated for human rights across the globe as he traveled from nation to nation to promote peace and equality. He has left a lasting impact on Oberlin through his speech, which continues to inspire student activism to this day.