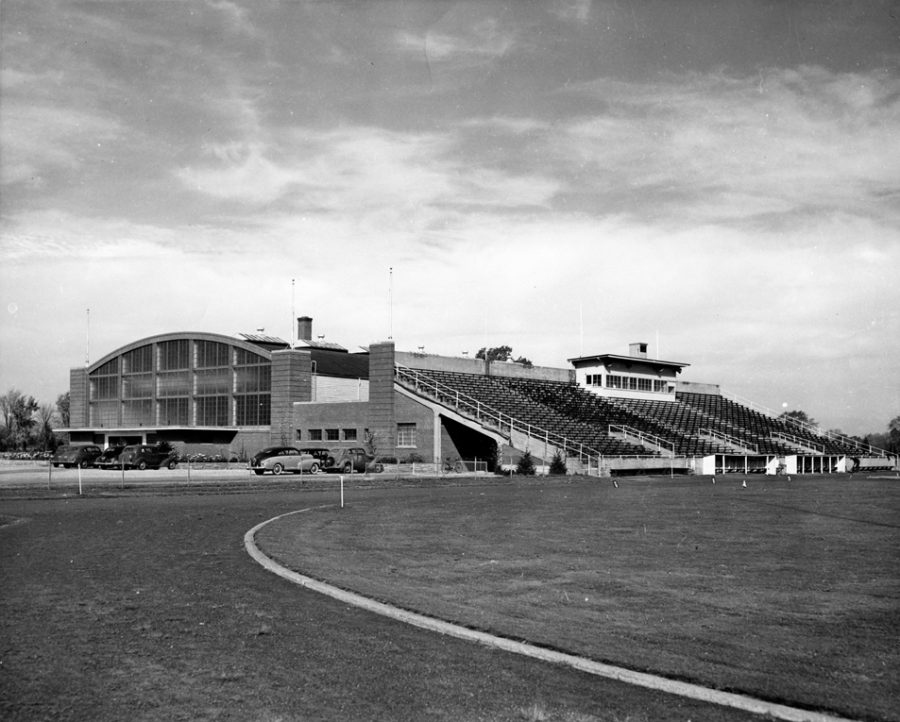 Oberlin’s Savage Stadium was the location of many football successes.

While the College now boasts a state-of-the-art football stadium, Knowlton Athletics Complex, the stadium that preceded it had a unique history of its own. Savage Stadium at Dill Field was built in 1925 after a run of success by the Yeomen. Up until its demolition in 2013, the stadium hosted a number of notable events in Oberlin football history.

The story of Savage Stadium starts with Oberlin’s football success in the late 19th and early 20th centuries. On Nov. 4, 1924, the Review reported a record crowd of over 7,000 people for the undefeated football team’s matchup against Case School, which has since merged with Western Reserve University to become Case Western Reserve University. It was reported that 2,200 people stood to watch the game while another 5,000 sat on the existing bleachers, or “uncomfortable, rickety wooden racks,” as they were often described. It was also reported that a large number of spectators were turned away due to a lack of standing room. These issues sparked discussion about a new stadium.

Following the game against Case, the College turned over $14,085 in ticket profits to pay off remaining debt on Dill Field, where a new stadium would be built. The original plan was to build a 5,000-seat stadium which was estimated to cost $50,000. Because the College’s endowment was only allowed for the construction of academic buildings, money had to be raised independently. One of the fundraising strategies for the new stadium was selling guaranteed seats to future games at the new stadium to students, alumni, and townspeople.

As discussion for how to fund a new stadium continued, Oberlin football closed out a historic season. Two weeks after the game against Case, they secured an Ohio Athletic Conference championship and finished an undefeated 8–0 season with a 13–2 win against Miami University. The season also included wins against current NCAA Division I programs: the University of Cincinnati and Ohio University.

On April 9, 1925, the Review reported on an approval for construction of a new stadium largely funded by the seat-selling strategy. While the new stadium had plans to accommodate a larger crowd and had stronger infrastructure, there was no significant increase in seats compared to the old bleachers. It was reported that then Head Coach W. L. Hughes and then Athletic Director Charles W. Savage — who would eventually become the new stadium’s namesake — traveled to the College of Wooster and the Ohio State University to study the architecture of their football stadiums for inspiration.

With the construction of the new stadium, Oberlin’s success on the football field continued. On Sept. 25, 1925, the Yeomen played their first game at Savage Stadium, scoring a 7–0 win against Albion College. That year, Oberlin went undefeated with a record of 7–0–1 and finished second in the conference. In the first three years Oberlin played at the stadium, they compiled a record of 19–2–2.

Despite the team’s early success at Savage Stadium, the most successful squad to grace the field was the 1945 Yeomen, who went 8–0. This was their third perfect season ever and their only perfect season at the venue. On Nov. 9, 1945, the Review described these Yeomen as a talented team that excelled in all phases of the game.

“This great team whose laurels won’t be revealed until late November when the intercollegiate football season ends will be crowned the greatest squad to have trod on Dill Field,” the article read.

Many of the team’s games that year were blowout wins, including a 28–0 defeat of Bowling Green State University, now a Division I school.

After this successful 1945 team, Oberlin football struggled for years on Dill Field. The team made national news for a 44-game losing streak that lasted from 1997 to 2001. When the Yeomen finally broke the streak with a win over Kenyon College on their home turf, it was a joyous moment; the team made national news again, appearing in ESPN and CNN for their streak-ending victory.

While winning records have been scarce, moments like these and individual outstanding players have given Oberlin much to be proud of. One of the best players to play at Savage Stadium was Chris Schubert, OC ’08, a native of Oberlin who set the school record for career receiving yards and receiving touchdowns. He was also a key member of the 2007 team that went 5–5 overall and 5–2 in the North Coast Athletic Conference, which broke a long streak of losing seasons for the Yeomen. That year, quarterback RV Carroll, OC ’09, also shined, winning NCAC Offensive Player of the Year.