In The Locker Room with Chase Sortor and Post, Queer Varsity Captains 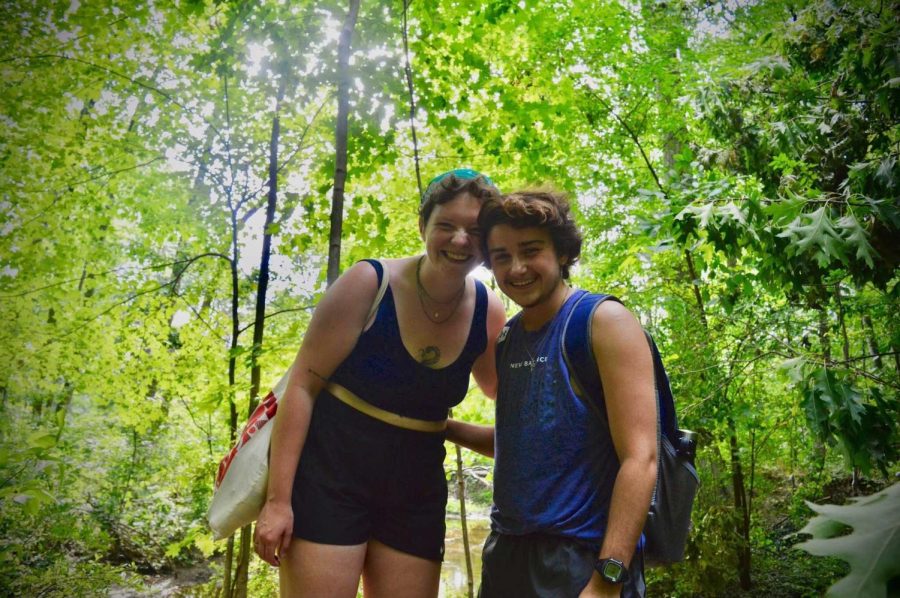 Third-years Chase Sortor and Post pose while on a hike together.

Varsity field hockey captain Post and varsity cross country and track and field captain Chase Sortor, both College third-years, have been dating for the past seven months. The two athletes met during the first week of their first year in a French class. Throughout their relationship they have navigated their positions as queer varsity athletes and leaders in their respective sports. Sortor and Post can be found cheering each other on from the sidelines, or at Slow Train, when Sortor visits Post at work. Their success both on and off the field illuminates the changing culture of Oberlin athletics in the visibility of Queerness, though there is still much work to be done to support athletes of all identities.

How did you meet?

P: We actually met in a French class. I’m a French major and Chase is a French minor. My first memory of him is when we were in class and he went up to our professor to say he was on the cross country team and wanted to go over classes he’d miss for meets. I was like, “Oh God, another athlete in the class — I don’t know if he’s gonna be nice or not.” But then we were in a group for something and he was really nice.

What kind of role, if any, does athletics play in your relationship?

CS: It makes it somewhat challenging to find time to spend together,  but makes that time more important and more special. It also gives us the opportunity to see the other person in their element, which can be really cool. And also there’s like a mutual understanding that it’s a time and effort commitment, rather than not being respected or taken lightly.

P: We also push each other to be better. Over the summer when I had morning lifts, Chase would be like, ‘you have to go’ and even though it was so early in the morning. But also since we’re both captains, we’ll sometimes talk about team dynamics or how to support teammates, or be able to create camaraderie. We bounce ideas off of each other, which is really nice to have. And it’s good to also have someone who knows my team, but is impartial because he’s obviously not on field hockey and doesn’t know the sport super well. There’s an ability to see the dynamics, but not see the conflicts of like. He’s just a good person to talk things through with.

At Oberlin, it seems that athletics has become more queer-friendly, which is different than previous years. Based on your experiences, do you think that that’s true?

CS: From what I’ve heard about other teams, it seems to be somewhat team-specific in terms of the waves of queerness that occur. I think I’ve noticed that since I’ve been at Oberlin, the men’s cross country team specifically has become more comfortable with queerness. I can’t speak super specifically on the inner workings of any other teams, though.

P: I think that definitely as a third-year — I don’t know if it’s just because I’m much more comfortable with my queerness — but I feel like everyone I talk to is more comfortable with talking about queerness in athletics, versus my first year. I remember, when I was recruited at Oberlin, just getting the vibe that I really enjoyed it at Oberlin, but I wasn’t sure why I wasn’t out yet. And in hindsight it was definitely like, ‘Oh, this is a queer-friendly space,’ but then actually as a first-year I wasn’t super comfortable in my skin, and also didn’t feel like athletics was a space to bring up queerness. Whereas now, on the field hockey team, I feel like queerness is something that we talk about often. A lot of my teammates are queer and if they’re not, then there’s still a level of respect that I didn’t necessarily feel as an underclassman in terms of queerness.

What would you want people to know about the intersection between being queer, or being in queer relationships, and athletics at Oberlin?

P: I think that the biggest thing is that even though Chase and I are in a relationship, or in any other relationship, one does not become the other. Chase is the captain of cross country and does amazing things on his team and works really hard to create the team environment that he has, among many other things. While I am a captain of field hockey, I work really hard to do the things that I do. I think what’s really cool about relationships in general, especially ones that are both genderqueer, is that there are certain things I don’t have to explain to Chase and vice versa.

CS: I guess just being an athlete from my first year to now, I have found that my team has been one of the greatest sources of support for me. Something I really struggled with was deciding when and how I wanted to start my transition. I felt like I was losing my identity as an athlete. So having the opportunity to have those two things coexist with a team and coaches that rally behind that has been really, really awesome for me.

What have your experiences been like as out queer athletes at Oberlin? Do you get a lot of support from your teammates, trainers, coaches, etc.?

CS: I’ve had a really good experience. I was originally recruited for the women’s team here, and when I reached out to the coaches about switching teams, they were super accommodating and kind. As I came out to more of my teammates and became more comfortable being publicly trans, I’ve gotten nothing but support. All of my closest friends were originally my teammates, but now they’re both teammates and friends. It’s just one of those once in a lifetime opportunities that I’m really grateful to have.

P: I think that field hockey’s a bit different from cross country or swim and dive, where there’s a men’s team and a women’s team. In that type of sport, an athlete can, for the most part, play on the team that they want to or that aligns most with their identity. Field hockey is not like that. It’s a dominant women’s sport in the United States, and I think that’s something that a lot of people in the larger USA field hockey community are still grappling with. So there’s a lot of ethics and frameworks in which gender is seen and considered. My team has been great. Everyone is really good about learning and listening and being patient. One of my teammates asked me about pronouns last year and I was like, “Oh, I don’t know.” And they were the first person to be like, “Oh, just take your time, it’s fine.” That somehow took a huge weight off of my shoulders because although I think it was a much bigger deal for me than it was for my cis teammates, the fact that she was willing to be patient meant a lot. I think that adults on Oberlin’s campus always have room to learn and what I would really love to see would be more resources allocated toward education for adults to have a space where they know it’s okay to mess up pronouns and they don’t jump on the defensive.