Testing and Tracing: Tracking the Origins of the December 2021 COVID Outbreak 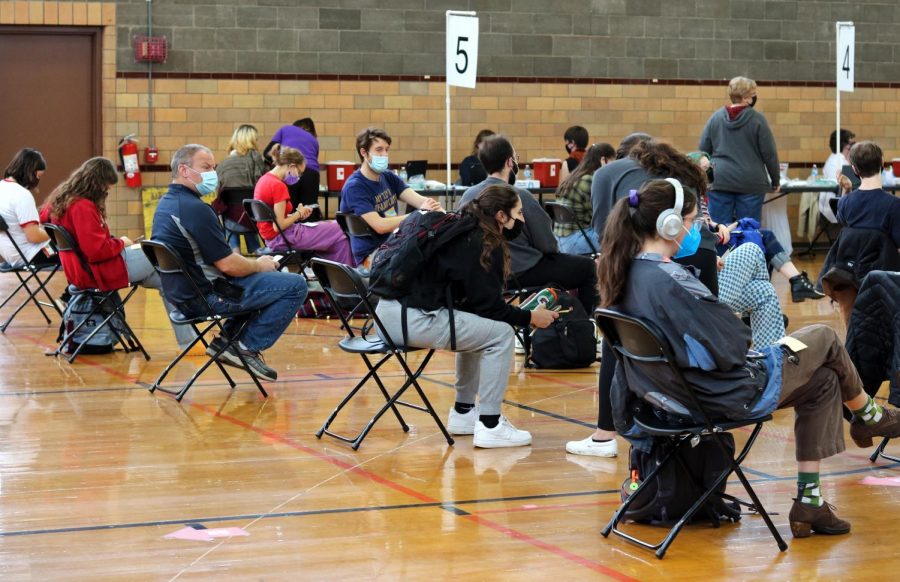 Students who are unable to meet the qualifications for a COVID-19 test from Student Health Services often seek a test from community resources like Mercy Allen Hospital or the Oberlin Public Library’s rapid test program.

After a semester with minimal COVID-19 cases on campus, on Dec. 20, 50 students tested positive for COVID-19 in 24 hours. This moment marked the beginning of the only significant uptick of the virus that Oberlin has seen over the course of the entire pandemic. In the final week leading up to winter break, a total of 158 students, faculty, and staff tested positive for COVID-19. Here, we break down the College’s decisions leading up to Dec. 20, changing health care guidance, and reaction to the outbreak.

Students were tested upon arrival in October 2021 and proceeded to enjoy a highly vaccinated campus with a close to zero percent COVID-19 positivity rate for the first few weeks of the semester. Oberlin’s first uptick in cases occurred at the beginning of November: By Nov. 7, the College had reported 27 cases in a three-week span.

In response to the November cases, the College expanded testing to seven days a week and relocated the testing site from the Student Health Center to Hales Gymnasium. The College did not revise its contact tracing guidelines, which had been amended in mid-August. The Review reported on Aug. 13 that the College stopped following CDC guidelines and instead adopted Lorain County Department of Health guidance that vaccinated, asymptomatic individuals did not need to be tested upon exposure. Despite the need for increased testing, the administration remained confident about its contact tracing protocol due to the campus’ high vaccination rates and mask protocols.

“Now the health department said they already consider it endemic,” said former Campus Health Coordinator Katie Gravens in a Review article published Nov. 12. “It hasn’t been officially termed as endemic as opposed to pandemic, but they said, ‘We feel we’re already in an endemic state because of the vaccination rates and the [low] rates of infection that [vaccines] have provided.’”

However, when reports in late November began to point to the existence of the new, highly-transmissible Omicron variant, this statement proved premature.

“I think Omicron took a lot of people by surprise because it’s so remarkably infectious and also so remarkably effective at escaping vaccine-induced immunity other than recently given vaccines,” said former Center for Disease Control Director Tom Frieden, OC ’82. “I mean, hindsight is always 20/20. Fortunately, Omicron is not particularly severe. It’s much less severe than other strains.”

In response to the new variant, President Carmen Twillie Ambar released a video on Dec. 14 reminding students to continue mitigation measures and urged them to be more concerned about hospitalization rates rather than individual case numbers. Oberlin did not test students returning to campus after the week-long Thanksgiving break at the end of November.

The College provided testing to students who fit its definition of COVID-19 exposure. Students who did not fit this strict definition but still felt they needed to be tested began testing off-campus in increasing numbers. As a result, the College was not aware of the full degree of student positives.

“One of the issues that we discovered that we had in our system was that there was a perception among students that we had bottlenecks in our testing protocols, so they were going off campus,” said Chief of Staff David Hertz. “We had to urge people not to go off campus for testing, because we wanted to be able to have a regular flow of information about reports of the results. But the perception persisted, and so when students [go] off campus and then when they get their results, if they’re positive, we are sort of dependent upon students for that information flow.”

At 12 p.m. on Monday, Dec. 20,  President Ambar sent an ObieSafe update to the campus community, maintaining that the College was not seeing a rise in COVID cases despite the nationwide surge of the fast-spreading Omicron variant.

“Currently we are not experiencing the same spread of COVID that some campuses across the country are experiencing, but as we all know from our past efforts, we benefit when we are proactive,” President Ambar’s afternoon email read.

That email also included announcements regarding significant changes in ObieSafe policies, from requiring students, faculty, and staff to receive a booster shot by Feb. 18, to remote-option classes and grab-and-go meals through January.

By 10 p.m. that night, the College had a stark update for the campus community.

According to Hertz, the College was suddenly inundated with calls from students reporting positive COVID-19 results, primarily from tests administered using off-campus facilities. This jump marked a stark shift from the slow trickle of daily positive cases the College had experienced so far in the semester.

“Right around 5 o’clock, I got a report that we were up to 50 and that’s when we really realized that we had a significant number of COVID cases on campus, that we were going to need to shift into a different gear to cope with,” Hertz said.

Hertz attributed the overwhelming number of off-campus tests to the perception among students that testing at Hales Gymnasium was inaccessible, largely due to the College’s strict definition of exposure to COVID-19.

College second-year Imogen Pranger was exposed to a peer who tested positive for COVID-19 on Dec. 19. Despite having a positive close contact, Pranger said that obtaining a test from Student Health proved to be a challenge.

“I told [Student Health] the whole situation and they were like, ‘If you’re not symptomatic, you can’t have a test,’” Pranger said. “They just weren’t giving me any guidance for — if I had been exposed — what to do. Then the nurse also said something along the lines of, ‘If you have been exposed from a close friend, you’ll probably eventually be contact traced, but it might take a while.’ And I was like, ‘Well, what is that supposed to mean?’”

While Pranger initially tested negative shortly after her exposure, she later tested positive on Dec. 29. However, she said that Student Health did not contact her about her potential exposure until a week after she was already exposed to the virus.

A Winter Break for No One

Faculty and staff members spent most of their break responding to the spike in cases. Necessary tasks included contact tracing, caring for nearly 150 students in isolation, shifting classes to an online format, and modifying protocols to prepare for students’ return to campus Jan. 2.

One of the biggest challenges over the break was finishing contact tracing. With such a large number of students sick, contact tracers were overwhelmed, resulting in many students returning home unaware they had been exposed to the virus.

Pranger said that receiving guidance from a medical health professional would have helped her better prepare for how to deal with the virus and her impending return home.

“If [the person who exposed me] hadn’t been communicating with me directly, I wouldn’t have even known that I’ve been exposed, because [Student Health] didn’t contact trace me until a week later,” Pranger said.

Meanwhile, students who tested positive before the break had to remain in isolation, which created another challenge. As part of the effort to care for these students, senior staff personally called each student in isolation individually to offer support and ensure access to resources. Vice President and Dean of Students Karen Goff had the idea to reach out to students and personally called 50 students who tested positive.

“I wanted to provide a sense of hope and care and remind them of why they’re a part of this kind of community: that even in isolation, you’re really not alone,” Goff said. “There’s a whole group of people, including the President and her Senior Staff — the most senior members of the administration — reaching out to you to make sure that our students have what they need, under the circumstances.”

Preparing for the Remainder of Fall Semester

Besides caring for students on campus, faculty and administrators spent the break quickly adapting classes to a hybrid format and developing new safety protocols for students to return to campus. This work was especially challenging for Conservatory administrators. Unlike the College, where most classes were already slated to go hybrid in January, the Conservatory had originally planned for all students to return to campus for the end of the semester.

The shift to a hybrid curriculum created challenges for ensemble groups and 24 students with recitals planned for January. In response, the Conservatory used the break to allow professors to develop plans for ensembles post-beak and to work with Student Health to develop a testing regimen to allow recitals to proceed.

Looking Ahead: Planning for a Safe Winter Term and Spring Semester

After the College made students’ return to campus after winter break optional, many students decided to complete the final three weeks of the semester remotely. Hertz said that a College survey showed that only one half of the student population — roughly 1,500 students — are returning to finish the fall semester in person.

Hertz said that the College has been working to create steps to protect the students that remain on campus. These steps include continuing grab-and-go only meals through Winter Term; requiring faculty, staff, and students to get booster shots by Feb. 18; and mandating testing for students upon arrival on campus.

Between Jan. 2 and Jan. 6 the College administered 1,952 PCR tests and 92 rapid tests, with 64 positive cases, including self-reported positives. As of Jan. 5, 44 members of the campus community are in isolation.

“We want to be transparent because transparency reduces rumor, reduces undue fear — that’s why we decided, at the beginning of the pandemic, to report every week,” Hertz said. “Omicron has redefined that somewhat because it spreads so quickly.”

The new guidelines do not effect enforcement of ObieSafe violations.

“I don’t think that it’s like a renewed enforcement of ObieSafe,” Hertz said. “I think what we saw was, at the very outset [of COVID-19], a need for enforcement on a de-densified campus before the advent of vaccines. … As we became more vaccinated, we said that this was the best way to safeguard our campus, and so our approach to the protocols was still, ‘Please follow them,’ but it reflected the realities that we had a lot more protection.”

Still, Goff maintained that students with a repetitive pattern of reckless behavior, such as partying and gathering with large groups of maskless students, will be held accountable through strict measures, including being asked to leave campus.

“We are an educational institution, so the intention is not to be punitive, but if we have people who are being reckless with their behavior, showing a disregard for the larger community — especially if it’s a behavior that’s repetitive, happening over and over again, then of course,” Goff said. “We do have to hold individuals accountable.”

Over the next few weeks, the College will prepare for Winter Term and the spring semester with transportation to booster sites and potentially another booster clinic hosted in conjunction with Lorain County Public Health. The College is also looking to anticipate shortages of personnel that have impacted other schools and industries in recent weeks.

“What we’re trying to do is anticipate concerns,” Hertz said. “It doesn’t mean that we’ll have all the answers, but we are anticipating the concerns, and I feel good about the planning process. I’m not seeing things shutting down and I’m not seeing a shortage here, but we’re planning for a lot of eventualities.”