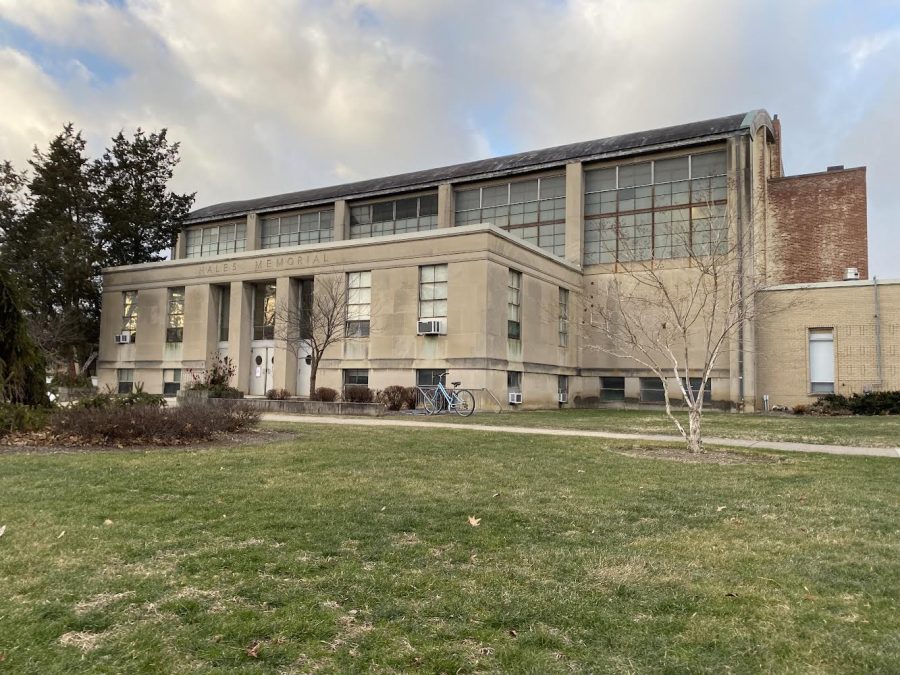 Compared to other buildings on campus, Hales Gymnasium hardly stands out. There’s already an athletics center, the Knowlton Athletics Complex, and a space for other sporting events, the Heisman Field House. More popular sites for social gatherings include the next-door Oberlin College Lanes and the Cat in the Cream. Today, Hales is most well-known for being the home of the two-hour lines for COVID-19 tests and its frequent mentions in ObieSafe emails. In its earlier years, however, Hales played an essential role on campus and was the hub of many exciting events.

In June 1939, shortly after Commencement, Hales Gymnasium was opened and dedicated by 1900 graduate G. Willard Hales, in memory of his mother, Lina R. Hales. Its original purpose was to serve as an athletics facility for women. The annual Princeton-Yale basketball game was played in Hales from 1940 to 1981 after previously being held on a court outside. Although the two teams were known as the Tigers and Bulldogs, respectively, and wore uniforms of the same colors, the Princeton-Yale game had no affiliation with either Ivy League school. Rather, it was a chance for women to compete against each other on competitive basketball teams. Spectators at the game were entertained by cheerleaders and skits performed by co-ops and houses. The Princeton-Yale game also had limits on the number of men attending — a 1944 Review article mentioned that, “A limited quota of fifty men looked sadly lost in their little corner until actual playing began.”

However, this game was almost canceled in 1942, when Oberlin men and women were engaged in, essentially, a prank war and began destroying each other’s respective dorm rooms, getting in by crawling through windows. One young woman tried to sneak into a social gathering for men, only to get thrown into a shower, and about 40 men attempted to storm the basketball court, only to get swiftly mobbed by angry women. This game was so disastrous that the police were called multiple times and the President of Oberlin College at the time, Ernest Hatch Wilkins, released a stern scolding in the Review on April 10, 1942, writing, “There has been much talk … among [Oberlin students] this year about good citizenship, even about the improvement of democracy. The performance here reviewed, for those who took part in it, and for any others who condoned it, was, to put it mildly, hardly consistent with such talk.”

The “talk” at Oberlin that President Wilkins spoke of referred to students’ reactions to World War II. During the war, with decreased enrollment and votes to ration dining hall food, Hales Gymnasium became a place for women to take their mind off of current events and relax with athletics and social events ranging from golf tournaments to Christmas proms. Support for the military and social events combined at Hales in August 1943, when one of many “taxi dances,” a dance in which a woman could pay to dance with a man, was hosted in the gym and raised $55 (about $886 in 2021 dollars) for the Navy-Marine Relief Fund.

While, today, Hales Gymnasium may be “quarantined” from social events during the pandemic, it was once a space for Oberlin women to thrive during a different national emergency over 80 years ago.