In the Locker Room with Đorđe Otašević and Dimitrije Radusinovic, Star Basketball Players and Friends from Montenegro 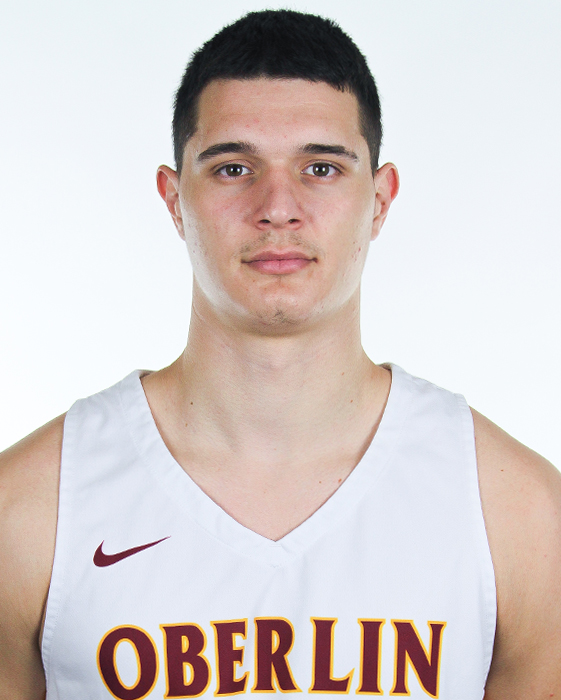 Third-year Đorđe Otašević and second-year Dimitrije Radusinovic both hail from Montenegro and attended the same boarding school;  now, they both play together on the men’s basketball team. Earlier this week, Radusinovic tied a career-high with 24 points and added a game-high 12 rebounds against Kenyon College. Otašević has also played a significant role in the team’s success in his starting position, most recently with his eight rebounds against Division II Lake Erie College on Tuesday. Both players knew that they wanted to play basketball in college, but the recruiting process was atypical given that they applied as international students. Although they are far from home, both players have found a family in the men’s basketball team.

Why did you choose Oberlin?

ĐO: I visited Oberlin’s campus two times. The first time, it was an official visit where I got to spend some time with the players in Stevenson Dining Hall. The second time, I got to play with the team. The whole team was really kind and friendly, and I loved the way they played, which was very important to me. Besides that, I liked the campus and the energy around the campus.

DR: I chose Oberlin for a couple of reasons. The first reason is that Đorđe was recruited a year before I was, so I decided to sign so that we could continue being teammates — at this point we’ve been teammates for three years. The second reason was basketball, of course. I really like the coaching style of Coach Cavaco, Coach Goodwin, and Coach Gillam and how dedicated they are to their jobs. All three of them use the maximum time to get the most out of each player. Last but not least, I chose Oberlin because of the school itself and the opportunities that it provides.

How did you hear about Oberlin?

ĐO: I’ve been dreaming of playing collegiate basketball since I was 12. When I was in prep school at Western Reserve Academy, Oberlin’s Head Men’s Basketball Coach Isaiah Cavaco and Assistant Men’s Basketball Coach Jalen Goodwin came to watch me play in a few games. They talked to me after the games and told me about Oberlin College basketball as well as the academic opportunities at Oberlin.

DR: Going to college and playing basketball in college has been on my mind since my first year of high school. I heard about Oberlin through my high school coach and Đorđe, who had been signed there that year. I have been playing basketball since I was six years old; I put a lot of work and effort into it. One of my dreams was to come to America and try playing in other basketball systems.

What was the recruitment process like as international students?

ĐO: The process was very stressful. On top of the SAT, as an international student I had to take the Test of English as a Foreign Language. Financial aid was also difficult because it involved a lot of paperwork due to the differences between the U.S. and Montenegro. Additionally, I played at Western Reserve Academy for only a year, which made it difficult for recruitment, so I ended up applying to a lot of different colleges.

DR: I personally didn’t think that the recruitment process was that different for international students than the usual process — just a little more paperwork that needed to be filled out.

Are there differences in basketball culture between the U.S. and Montenegro?

ĐO: I think that American high school basketball is heavily influenced by the NBA, where players like to play individually and show off their own skill sets. Back in Montenegro, we play more of a traditional basketball, where the collective team effort is much more important than an individual’s. College basketball culture is pretty similar in that, at Oberlin, we’re focusing on the team and what we can do to best support the team.

DR: I can say that there is a difference in the youth teams. That is, there is a difference between high school competitions here and youth selections competitions in Montenegro. Here in the U.S., high school basketball was focused on individual play, and there’s a faster rhythm of the game. Better defense is also preferred, and there are fundamental principles in attack that are emphasized to be successful. As for college-level basketball here and professional basketball in Montenegro, there’s not much of a difference. Just like collegiate basketball, every team in Montenegro has their own principles and systems that players must adapt to and give their best.