Euphoria Still Has an Oversexualization Problem 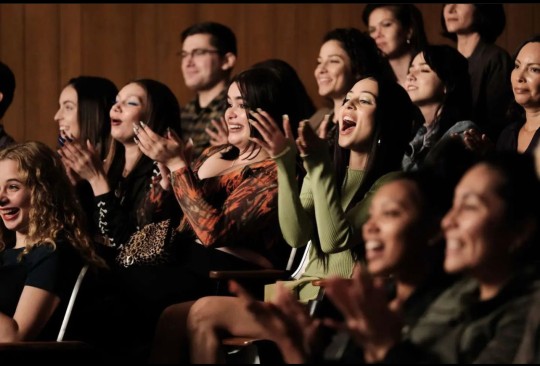 Characters, Kat and Maddy, clap at the height of the Our Life play during Euphoria Season 2

Last Sunday marked the release of the season two finale of HBO’s hit coming-of-age drama Euphoria. The show has sparked conversation and controversy as it focuses on the twists and turns, heartbreak, and betrayals in the relationships of the characters played by actors Zendaya, Hunter Schafer, Dominic Fike, Maude Apatow, Alexa Demie, Sydney Sweeney, and Jacob Elordi. With this latest season has come the resurgence of conversation over the subject material of Euphoria itself.

No matter which way you swing it, there’s something weird about an adult show that prominently features teenagers having sex. While all the actors who have sex scenes are at least 23 years old, the fact remains that Euphoria has a serious issue with oversexualizing teenagers, even if said teenagers are played by adults.

The trend of sexualizing teens in media isn’t anything new. The genre of high school drama has been around for decades now from beloved classics like Freaks and Geeks, Degrassi, and Skins to more recent fan favorites like Riverdale, Sex Education, and 13 Reasons Why. All of these shows discuss and depict serious issues like underage sex, suicide, and drug use all to varying degrees of realism with some shows, like Riverdale, reaching laughable levels of unrealism.

That’s the thing about Euphoria. For all its unrealistic elements, it still feels surprisingly real for many viewers. I remember watching Season 1 for the first time and being shocked by how close to home the relationship between characters Rue Bennet and Jules hit.

One of the most noteworthy aspects of Euphoria is that despite the ensemble cast, each character receives a level of attention and depth that brings them to life. Each character has their own distinct and original background and story. It’s hard not to have a character you relate to. Even amidst the overblown drama and action-packed plotlines, there remain nuggets of truth and moments of realism that many among the largely young adult audience can relate to. However, this is where we get into the discussion of what’s okay and not okay to show on screen.

Yes, teenagers have sex. That isn’t the problem. The problem is the extent to which it is shown on screen, and whether it’s necessary to the plot. On the one hand, it can be reassuring for young people to know that sex is normal and nothing to be ashamed of. On the other hand, there’s a problem with the sensual, choreographed, highly sensationalized depiction of sex that they’re showing on-screen.

Not to mention, this oversexualization is more than just characters having sex — it’s also how the characters dress, act, and present themselves. A common point of criticism is how the female characters — who are supposed to be middle-class — dress in one-of-a-kind AKNA sets to go to high school at 7 a.m. In fact, a TikTok trend has emerged where people change into the unofficial uniform for “Euphoria High.” While Euphoria might be a high school drama, it’s definitely not about going to school.

Additionally, we have the plot point in Season 1 where Kat, played by Barbie Ferreira, becomes a cam girl. In a move that’s depicted as empowering and a way to reclaim her sexuality after battling body image issues, Kat is paid to verbally dominate and sexually degrade adult men she found on a Pornhub-esque website. This is blatant grooming as Kat is a minor engaging with adult men. There’s also something sinister about depicting sex work as an easy and inconsequential way to make money for underage girls looking for quick cash. Let’s not even get into the show’s depiction of sexual violence or the fact that the catalyst of the first season’s plot involves Jules, a minor, lying about her age so she can have sex with an adult man she met on what looks like Grindr.

The problems with Euphoria don’t end with oversexualization. We also have the depiction of drug use. Euphoria centers on Rue, who comes back from a summer spent in rehab with no plans to stay sober. We get an in-depth look into Rue’s relationship with drug use and self-medicating. Especially in this latest season, we get to see the absolute nightmare that withdrawal is for Rue. When it comes to Rue, at least, the show is definitely not glorifying teen drug use. However, Rue isn’t the only character we see using drugs on-screen. Maddy and Cassie have a prominent scene where they take MDMA, Jules takes hallucinogens with Rue the first time they meet, and Elliot, like Rue, is a self-proclaimed “drug addict.” Just about every prominent character takes or purchases drugs on screen at least once. With the exception of Rue, they all come off as perfectly well-adjusted, and they don’t suffer from anything more serious than a hangover afterward. Rue’s younger sister Gia even says “when [Rue] takes drugs it’s different from when other people take drugs.” The claim that Euphoria does not glorify drug use just doesn’t hold when we take into consideration that 9 out of 10 characters take drugs on screen.

Unlike attending college, attending high school is an almost universal experience in the United States. You’re old enough to have your own thoughts and opinions but still young enough to be coming to terms with new emotions and experiences. No two people have the same experience in high school. For some, it’s the highlight of their youth and something they spend decades of adulthood reminiscing about. For others, it’s four short, unmemorable years before adulthood and actually getting to live how they want.

Now, I’m not saying that you can’t watch Euphoria or even that you shouldn’t, but we need to acknowledge the trend of making increasingly graphic, increasingly sexualized high school dramas and what they mean for the groups that they depict.