Senese-Grossberg’s At the End of the World Illuminates Jewish Identity, Hope in the Face of Apocalypse 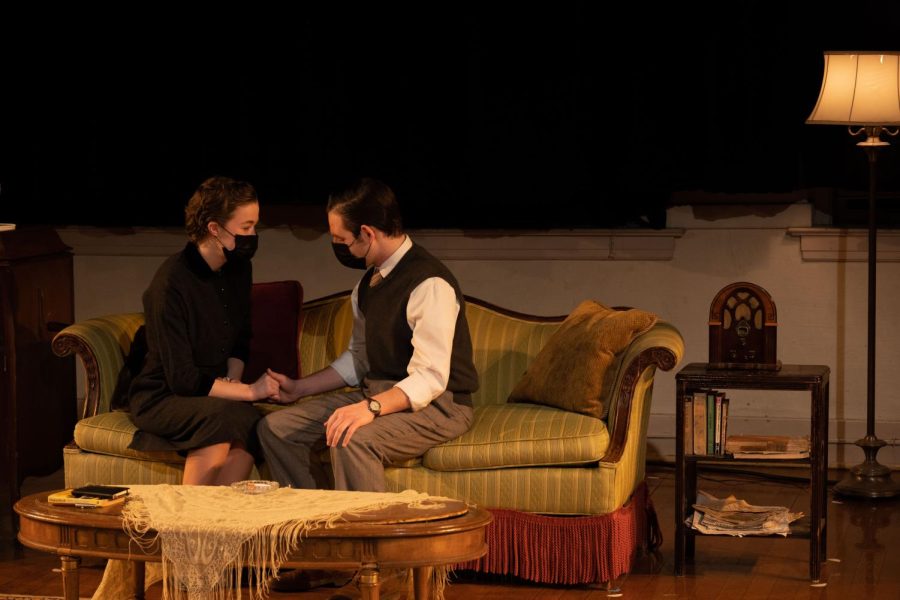 At the End of the World, a written and directed by College fourth-year Zoe Senese-Grossberg, opened Thursday in Wilder Main Space.

“How do we live when we feel like everything is being destroyed?”

This is the question College fourth-year Zoe Senese-Grossberg has spent the last few years reflecting on while writing and directing their play, At the End of the World. Written during the pandemic, the play was initially produced as a radio play but premiered on stage for the first time Thursday in the Wilder Main Space, where it will run through Sunday.

In Nov. 2019, Senese-Grossberg had a discussion with a friend about fears surrounding the end of the world, and soon after, she began writing the play which would ultimately become a two-and-a-half year endeavor. At the End of the World is set in New York City in 1938 and follows the lives of three characters: Ezra Lavinsky/Edward Llewelyn, Freyda Lavinsky, and Julia Ford, who grapple with questions of identity and family in the wake of an antisemetic attack.

College fourth-year Justin Pelofsky, who plays Edward/Ezra, feels that despite the dark material of the play, it ultimately offers audiences a message of community and hope.

“I think, really importantly, the connection we have to our loved ones, and how much that matters, … I think that that’s sort of a big message,” Pelofsky said. “To value these connections that we have even though sometimes things feel so hopeless.”

Pelofsky’s castmates expressed similar thoughts on the play’s impact. College second-year Noa Shapiro-Tamir plays Ezra’s cousin Freyda, whose apartment serves as the backdrop for much of the play.

“It’s a really beautiful play that, to me, speaks about how people struggle to connect with one another and with other people in a time of tragedy,” Shapiro-Tamir said. “Especially one that is outside the realm of control of these people.”

As it explores the vitality of human connection, At the End of the World also examines the experiences associated with holding Jewish identity in the 20th century.

“When I started the play, it was a lot more about this metaphor of the end of the world,” Senese-Grossberg said. “But I think doing this production, it’s felt like it’s way more about Jewishness and, specifically, the Holocaust.”

Senese-Grossberg hopes the play will bring to light Jewish issues she encounters in her own life. For Senese-Grossberg, intentional erasure of identity, particularly during the Holocaust and subsequent American assimilation, defines the modern Jewish experience.

For this reason, she believes it is important to bring discussions of Jewish identity in tumultuous times to the Oberlin theatrical audience and beyond.

Production-wise, At the End of the World went through a process that was far from ordinary. Written near the end of 2019, original production for the show stalled when students were sent home as the world’s focus drastically shifted toward public health.

Over the course of the pandemic, Senese-Grossberg and her team continued working on the piece, rehearsing, and producing the radio play in place of a live performance. However, upon returning to campus in the fall, the team began to imagine a way to revitalize the project in its originally intended format. Their solution was to turn the play into a Winter Term project, giving the whole team time to focus intently on production. Shapiro-Tamir says she saw this as an excellent opportunity.

“Having this as a primary focus over Winter Term, for me, was really wonderful,” she said. “I got to go deep and become really close with these people, and spend my work day with them, but also had a few hours in the evening to take care of myself and nurture other aspects of my life.”

College second-year and stage manager Ryan Beatty was also happy with the work that was done over Winter Term.

“I’m proud of the lights and the sound and the costumes and everything,” Beatty said. “I think they look really good. I don’t think they’re necessarily changing the artistic vocabulary of theater at Oberlin, but I do think we put together a really good show.

College fourth-year Sophie Falvey, who plays Julia, enjoys participating in Oberlin’s creative theatrical atmosphere. “Because the culture around theater here is so self-motivated, it becomes, at a certain point, hard to pin it down,” Falvey said. “I think that’s the wonderful thing about college theater … the look of it is always going to be changing.”

The play follows the stylistic tradition of American realism, an artistic movement which encouraged theater to be didactic, while also bringing a unique voice to the stage. It ruminates on the human condition in times of conflict.

“If you want to see three people try to figure out how to live in a world that is so much like ours, maybe you’ll learn how to live in the world yourself a little better,” Senese-Grossberg said. “I don’t think they know what to do, and neither do we, but hopefully we can come to the same space for a few hours and try to figure it out together.”