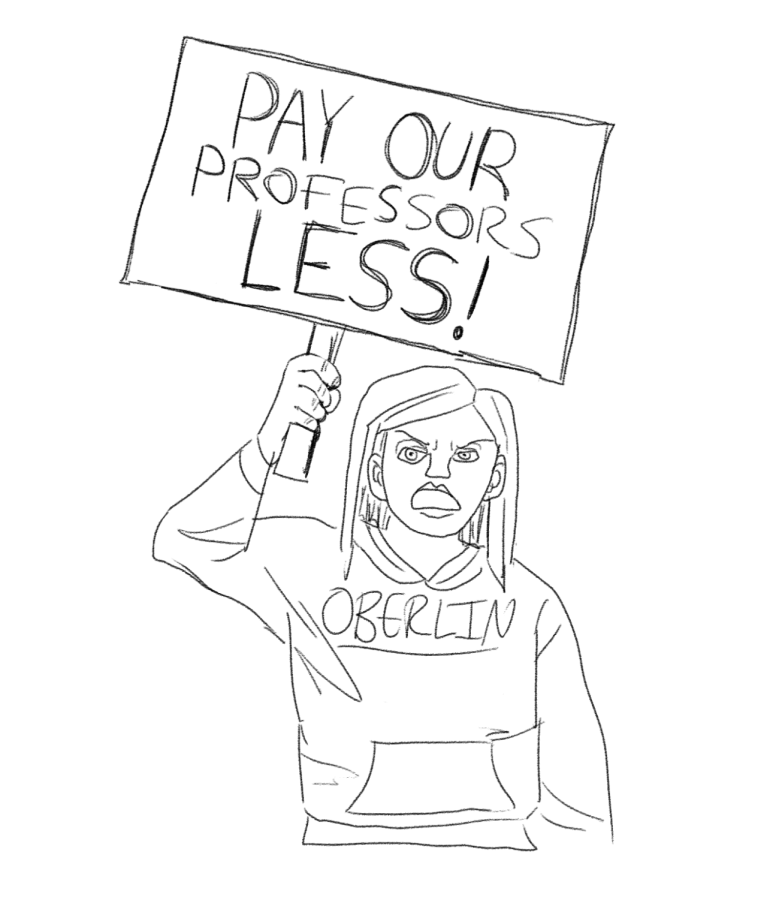 In the latest in a string of ridiculous happenings on Oberlin’s campus, our faculty are requesting a pay raise. I find this to be absolutely preposterous for a number of reasons. After all, the pursuit of academia is completely separate from modern-day luxuries such as a roof over one’s head or a car that runs on gasoline. Why would we pay professors more when they could, instead, be paid less? I understand that this may be a startling proposal for many, but in reality, this would likely not have too much of an impact on their day-to-day lives. Has Oberlin’s staff considered that perhaps they could benefit financially from doing away with unnecessary expenses such as gasoline? A car is absolutely unnecessary in Oberlin. Oberlin is one of the most notoriously walkable places in the United States: a small town in the Midwest surrounded by farms and a Walmart only a 40-minute walk away! Why would anyone need a car here? And for those who insist that owning a car is necessary, at least consider ditching gas. The idea that cars need fuel to run is simply an incredibly effective marketing campaign put forth by the gas and oil industries. The only reason we rely on these substances is because of their lobbying in government. In reality, it is merely a conspiracy to keep all of us in their clutches, under the false pretense of “needing to run machines that are essential to life.” In the case of a true emergency in which gas is necessary — though I can’t possibly imagine a situation where this would be the case — those in need of gas could simply siphon gas out of one of the College’s many trucks. Doing away with the use of gasoline would also greatly contribute to Oberlin’s long-term sustainability goals, as it would result in fewer emissions of greenhouse gasses on and around campus.

Additionally, what the fossil fuel empire doesn’t want you to know is that any liquid will operate a car in a pinch. It is simply not necessary to fill a car’s tank with gas, especially with prices these days. A car could run on just about any other liquid at a far lower price. For those who claim that cars are a necessity of living in Oberlin, I suggest filling one’s gas tank with milk, then basking in the savings of avoiding gasoline.

These so-called “necessities” are not as important as we may think. Humans have lived without motorized vehicles and whatever the American health care system is for hundreds of years. Academia must return to its roots in simpler times. Would Plato have insisted on compensation that would allow him to partake in such frivolous luxuries? Giorgio Vasari certainly wouldn’t have demanded better pens and paper to record his life just as Leonardo DaVinci did not request better cadavers than the bodies he dug up from local graveyards at night. The pursuit of academia has always been knowledge, not luxuries. It is time that Oberlin faculty open their eyes to this reality and act accordingly: after all, the College’s motto is “Learning and Labor,” so professors should start putting in the labor.