I Endorse Tim Ryan and John Cranley for Senate and Governor 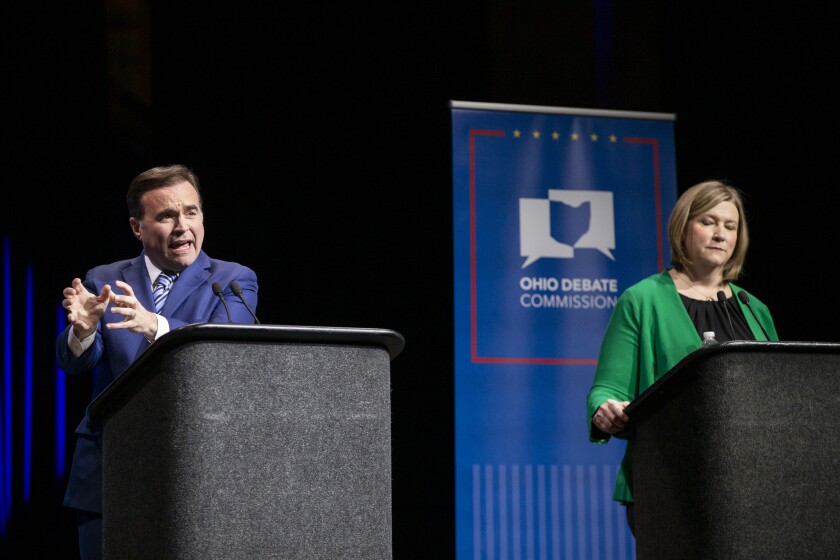 Courtesy of The San Diego Union-Tribune

The Senate vacancy created by the surprise retirement of Senator Rob Portman creates a vital opportunity for the Democratic Party to gain a majority in the senate. However, Democrats face an uphill battle in doing so: inflation concerns, a longstanding national trend against the incumbent party in midterm elections, and the increasingly red state of Ohio.

This campaign thus demands a candidate who can speak to blue-collar workers whose economic security has been compromised amid the unemployment and underemployment associated with the COVID-19 pandemic. It demands a Senate candidate who can speak to the bread-and-butter issues facing Ohioans across the state, rather than one who will to right-wing attempts to dominate the discourse with fabricated culture wars.

While Congressman Ryan was unsuccessful in conveying his blue-collar message to voters in the 2020 presidential primary, on his Senate campaign he has traveled to all 88 counties of Ohio, talking at length about the importance of wages and job creation, a focus that has earned him the support of Senator Sherrod Brown. Indeed, Senator Brown said, “With Tim Ryan and I in the Senate, we’ll be the most pro-worker team in the United States Senate, bar none.”

To be sure, Congressman Ryan was not always aligned with some issues central to the Democratic Party, namely abortion. Ryan stated that, growing up Catholic, he initially identified as a pro-life Democrat. But having listened to pro-choice women in the Democratic caucus and Ohio, he changed his tune, ultimately characterizing abortion as an “issue of freedom,” with positions that have earned him the endorsement of the National Abortion Rights Action League and a 100 percent rating on Planned Parenthood’s most recent congressional scorecard.

Similarly, while previously boasting an “A” rating from the National Rifle Association, Ryan has since called out Republicans’ intransigence on common-sense gun control measures, especially in the face of deadly mass shootings.

But ultimately, this Senate race is not about a seven-year-old stance on abortion or guns (in a state that likes its guns). It is about who can win in November.

On the other side of the Senate election is a primary filled with candidates aiming first and foremost to out-MAGA one another, with J.D. Vance claiming the coveted endorsement of former president Donald Trump and while also clinching the lead in the polls from Josh Mandel. Both candidates would pose a setback not just for the state of Ohio as they prioritize manufactured crises over real-world problems, but also to the nation as President Biden pursues his social and economic agendas and seeks to fill judicial vacancies that will likely remain empty with a Republican Senate majority. And while Senator Portman has certainly toed the party line, the winner of the Republican Senate primary will likely be someone who still, well over a year later, refuses to accept the legitimacy of the 2020 presidential election.

This election is not about policy. It is about democracy.

Any of the Democrats running to succeed Senator Portman would vote in alignment with the Democratic Party’s substantive agenda and would vote to confirm the Biden administration’s judicial nominees. Tim Ryan is best positioned to have the opportunity to do so.

Ohioans are also faced with a hotly contested gubernatorial primary in the effort to unseat Republican Governor Mike DeWine, who is also facing challenges from the right, in large part in response to his public health measures to curb the spread of COVID-19. Democrats have before them two highly qualified candidates: John Cranley, former mayor of Cincinnati and co-founder of the Ohio Innocence Project, and Nan Whaley, former mayor of Dayton.

Whoever wins the gubernatorial primary will face an uphill battle in securing the governorship, which has been controlled by the Republican Party since 2011. The task at hand is to choose the most electable candidate who will have the opportunity to either advance their progressive agenda or, more realistically, effectively put the brakes on an extremist agenda working its way through the legislature. That candidate is John Cranley.

Nan Whaley has a chance to make history in this battle over the governorship. Neither major party has ever nominated a woman for governor. She has already obtained the coveted endorsement from Senator Sherrod Brown, as well as from Planned Parenthood. One question though is whether Ohio, in this time of hyperpartisanship and heightened conservatism, is ready for an all-female Democratic ticket. It might well be, but it may not be worth taking the chance.

As we look ahead to the Supreme Court’s likely overturning, or at least evisceration, of Roe v. Wade, the question is less what the respective candidates’ records were years ago and more how they will work in a bipartisan manner with the Republican-controlled legislature and prevent the adoption of regressive policies. Although Cranley was not historically pro-choice, he currently maintains that he would veto anti-abortion legislation put forward by the Ohio legislature.

Among Cranley’s proposals is the legalization of marijuana and the use of resulting tax revenue to invest in 30,000 well-paying jobs in roads, broadband, and energy. While it is unclear whether such a proposal would pass through the Ohio legislature, given the popularity of the policy among Ohio voters (50.4 percent approved and 39.7 percent were opposed or undecided as of February 2022), it is possible that the policy might be adopted via direct ballot.

Moreover, as Republicans fight against expansions on the success of the Affordable Care Act, John Cranley is proposing bringing a federally qualified health center to each of Ohio’s 88 counties, an act that would help to curb Ohio’s opioid crisis and mental health challenges within the population.