The Oberlin Review • May 6, 2022 • https://oberlinreview.org/26984/sports/nfl-draft-sparks-conversations-around-ncaa-sports-betting-rule/ 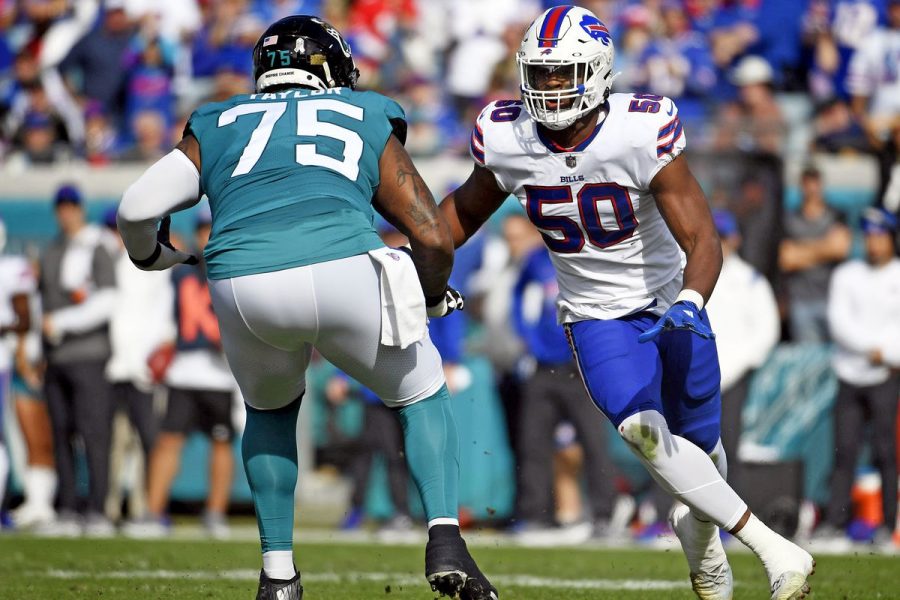 Gregory Rousseau, a football defensive end for the Buffalo Bills, played college football at the University of Miami.

American football fans have a better understanding of what the upcoming football season will look like for their teams now that the NFL draft has been finalized. The draft, which draws in millions of viewers annually, is one of the most anticipated events for NFL fans, not only because of their love of the sport but also because they can place bets on players, teams, and selections.

Three years ago, the Supreme Court overturned the national ban on sports betting, and now more than 100 million Americans live in places where they can legally gamble on games. In 2020, the sports betting industry raked in $1.5 billion in revenue, and the American Gaming Association estimated that 31.4 million Americans would place $7.6 billion in legal bets on the Super Bowl this year.

However, for NCAA athletes, partaking in sports betting can have dire consequences. The NCAA strictly prohibits all of its athletes from participating in sports wagering activities or sharing information concerning intercollegiate, amateur, or professional athletics competition. NCAA athletes who do participate in these actions may lose their eligibility to play collegiate sports.

“Sports wagering has the potential to undermine the integrity of sports contests and jeopardizes the wellbeing of student-athletes and the intercollegiate athletics community,” reads the NCAA website. “It also demeans the competition and competitors alike by spreading a message that is contrary to the purpose and meaning of ‘sport.’ Sports competition should be appreciated for the inherent benefits related to participation of student-athletes, coaches, and institutions in fair contests, not the amount of money wagered on the outcome of the competition.”

College third-year and avid sports fan Oliver Ripps disagrees with the NCAA regulations prohibiting sports betting because he believes the notion that it undermines the integrity of sports is false.

“Sports betting brings an added level of excitement and dedication to sports,” he said. “[Division III] games are not even available in betting markers, so the idea that players could be throwing games to win money is absurd.”

Khalid McCalla, OC ’21, used to be on the Oberlin football team and loves sports betting. He finds that the added pressure of placing bets provides a whole new way to enjoy athletics.

“Everyone who enjoys sports can enjoy a good game, but it’s really hard for a lot of casual fans to enjoy the bad ones,” he said. “Sports betting, like fantasy sports, can increase interest and enjoyment for less important games, which is super important for sports like baseball, basketball, and hockey that have hundreds of games a season.”

Like Ripps, McCalla believes that the vast majority of athletes wouldn’t throw a game because of sports betting.

“Even in a lot of the high-profile incidents of betting on sports, you see people swearing they’d never bet on their own team, and I tend to believe them,” McCalla said. “I think that most people who become experts in their field would never jeopardize that for a relatively minor payout. I definitely understand the concern surrounding this and understand if the NCAA doesn’t want athletes betting on their own sports, but others should be fair game.”

Although this may be true for some, gambling has had a long history of corrupting sports by motivating athletes to rig games. One of the most prominent examples was the 1919 Black Sox scandal, where eight players were banned from professional baseball for conspiring to throw the World Series for a payout.

McCalla believes that the debate about sports betting is another way to control college athletes and deny them benefits under the guise of “amateurism.”

“Even with some of the massive deals you hear about, the vast majority of college athletes are not crazy rich, nor are they destined for professional careers,” he said. “Speaking from my experience, I worked over six different jobs in college on top of being a student-athlete. I currently have a bunch of student loans, and there were numerous times I couldn’t register for classes because my tuition payments were late. Since graduating, I’ve made several thousand dollars betting on sports, and it’s acted as a second source of income for me.”

Despite not betting on sports in college, McCalla wishes he had.

“I probably would’ve been a better student-athlete, and could’ve spent my time building the college experience I’d always envisioned for myself instead of working myself ragged and worrying about money,” he said.

On the other hand, College third-year Jack Povilaitis thinks that it’s at least fair for NCAA athletes to not bet on competitions of their own level or in collegiate sports, but doesn’t see the reasoning behind athletes being barred from betting on professional sports.