The Oberlin Review • May 13, 2022 • https://oberlinreview.org/27200/sports/how-much-does-the-review-staff-actually-know-about-sports/

How Much Does the Review Staff Actually Know About Sports? 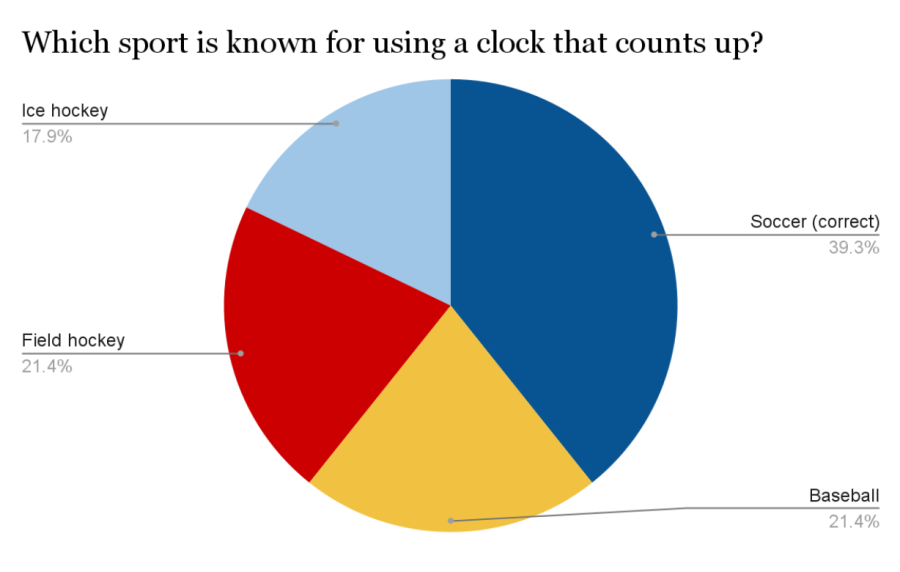 Editor’s note: The following quiz was administered entirely in multiple choice form and our editors are certain that multiple correct answers were obtained by guessing.

As a sports editor, a constant theme within the Review office is having to explain sports terminology to fellow staff members as they read and edit the pieces we produce. To gain a better understanding of the Review staff’s level of sports knowledge, the Sports Section carried out a survey of 10 multiple choice questions regarding eight different sports. The survey garnered 29 responses, roughly 75 percent of the Review’s staff. In the end, the average score was 59.7 percent — a failing grade, but by a small margin.

While the overall score was not impressive, the staff did very well on a few questions. They knocked it out of the park by correctly identifying “MLB” as Major League Baseball at a rate of 96.6 percent. They also had a perfect score in identifying “MMA” as mixed martial arts. However, other questions gave participants much more trouble.

The other baseball question, which asked staff to define “RBI,” had much more concerning results. Only 48.3 percent of the participants got it correct (runs batted in), while 37.9 percent believed it meant “runs batted to infield.”

The Review staff was understandably fooled by a question that asked for the proper name for the top of a hockey uniform — a sweater — with only 13.8 percent guessing correctly. However, participants’ responses to a certain question would alarm any well-versed sports fan. Let’s consult a visual to understand where the staff went wrong:

It is particularly concerning that baseball got any responses, considering the game uses innings instead of a clock. Contributing Sports Editor Zoë Martin del Campo was dismayed to learn that 21.4 percent of participants thought that field hockey uses a clock that counts up. American football terminology proved especially tricky, with only 65.5 percent of participants knowing what offsides are. Another distressing result was a vote for “bacon” as a definition of “‘streaky’ player.”

The results for one of the questions demonstrated that the staff has been keeping up with Oberlin’s lacrosse teams this spring — more than half the respondents correctly defined a “ground ball.”

Devastatingly, nobody got a perfect score — including the sports editors themselves. On the bright side, only two people got the lowest score of 30 percent. While most Oberlin students believe that Oberlin “isn’t a sports school,” this survey goes to show that the Review is, in fact, pro-sports. GoYeo.