The Oberlin Review • May 20, 2022 • https://oberlinreview.org/27315/news/ella-fahl-moxley-review-news-editor-extraordinaire/ 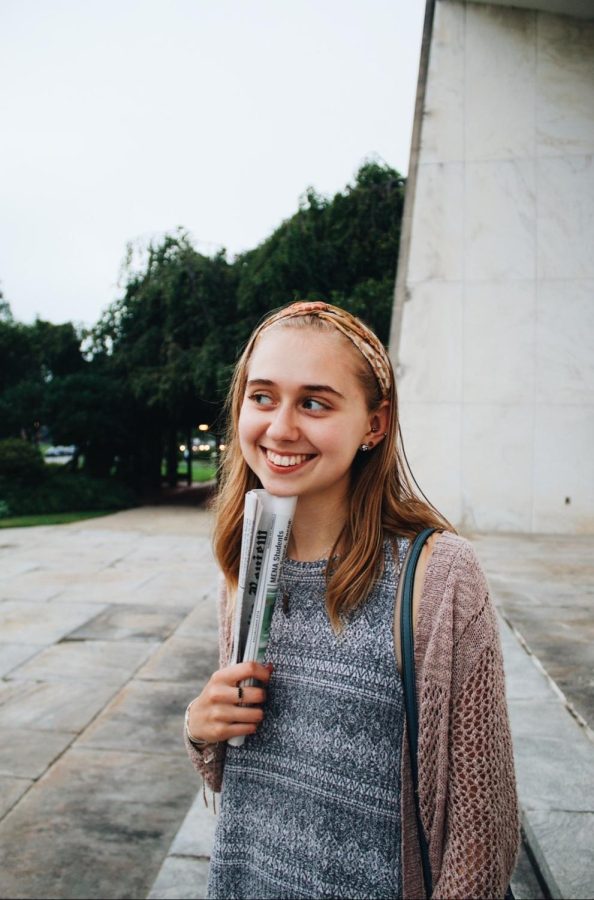 Ella Fahl Moxley, OC ’22, has been involved with the Review since her first semester at Oberlin and has worked as a News Editor for six semesters. She has contributed to notable coverage of the COVID-19 pandemic, racism in STEM, and community news. When she is not editing the News section, she can be found going on runs and avoiding bird attacks, talking to her track star boyfriend Ansel, or doing homework behind the Science Library desk . Next year she plans to move in with her partner, Gigi, in D.C.

Why did you start working for the Review?

I was feeling a little bit lost my first year, and I wasn’t sure what I wanted to do with my free time or how to find my sense of community. I was talking to my advisor at the time — Jan Cooper, the Review’s sponsor — and she was like, “Oh, you should write for the Review. You can do it for credit, and you already know the person you’ll be working with, Anisa.” Anisa was one of my very first friends at Oberlin because she was in my PAL group and first-year seminar. So I started writing, and while there were definitely some messy times in the first year, Anisa was always so supportive and I’ll never forget having her as my first editor. I trusted her so much, and she really brought me into the Review and taught me everything I knew.

What do you think have been the most important stories in your time as News Editor?

I’m honestly really proud of the work that the Review and the News section have done to cover COVID-19. I think the Review is in such a unique position to be aware of what’s going on on campus, sometimes even before people in the administration are. For example, in December, the Review became aware pretty early on that there was an outbreak on campus, and we brought that to the attention of the administration. I’m really proud that the Review has such a strong connection to campus that we are aware of stories before they even manifest.

Besides COVID, we did some really important work last spring about racism in the STEM departments on campus. I think that was just a starting point for future work, but that was a really important story to report, a story to be heard and told.

You’ve kind of already touched on this, but what accomplishments during your time at the Review are you most proud of?

When I became a news editor, two of my main goals were to increase community news coverage and to increase mentorship at the Review. I feel really proud of the way those goals have manifested. Several weeks ago, we published a paper with only community news in the News section, and I feel like that is a really direct manifestation of the goals I set out to accomplish alongside Gigi, Anisa, and Kar, who also feel really strongly about those issues. I think there are definitely other goals to accomplish and things we could do better, but I think we’ve come a long way in the past couple of years.

I’m so proud of where the News section stands today. When I first started writing for the Review, I was the only senior staff writer, but now we have a team of three editors, two senior staff writers, and our layout editor. We’re a really cohesive group of six people with a lot of guest stars who come in regularly and work with us. I can’t take credit for all the people who are doing great work, but it’s been really great to see people who came in their first year with no experience with journalism who are now thriving, being so creative, and working so hard to make something that’s really beautiful and exciting. I’m just feeling really excited that I was part of making that happen.

What has been your favorite memory during your time with the Review?

I look back fondly on the first story I ever wrote. I reported on a protest, and I didn’t really know what I was doing. I didn’t know that I was supposed to record people talking. When I got there, I was going up to people and asking them for quotes, and I was trying to write down what they were saying so quickly. My notes just look crazy from those interviews because I was so stressed! I was like, “I guess I’ll take a picture of the protest.” And I think I edited the picture too, because I thought I knew what I was doing. It didn’t look good, and I made all the red accents really bright and it’s really ugly. But I finished it up and sent it in.

Then I went out of town that weekend for a Model UN conference, and as I was sitting in this really boring conference room, my friends texted me a picture of the front page of the Review, and it had my article and the picture I’d taken on the front page. And I was like, “Oh no.” But it felt really good, too. It was such a silly story, but for the first time I had worked so hard on something, and then to see it up there on the front page — even though it was a slow news week — felt really good.

This isn’t a specific memory, but honestly, one of my favorite memories of the Review was last year during COVID when we weren’t printing and weren’t allowed to be in our office. So we worked in Wilder Hall, which was super weird. Thursday nights, Gigi and I had this tradition where halfway through production, we would take a break to go downstairs to DeCafé. They had a special where you could get a cookie and milk for a meal swipe, so that was the thing we always did — our treat for getting through Thursday night. I got really close to Gigi, spending time with her doing that. Working with Gigi has been one of my favorite parts of being on the Review. We grew from baby writers to really confident editors together, and I am so grateful that we were able to do that together and that I could learn from her. So that is a happy memory that stands out.

Looking back on your time at the Review, what advice would you give your first-year self?

I think just to be a little bit more assertive. It took me a really long time to push myself into trying new things, whether that was journalistically or just going to the office or asking for help. Once I started doing those things, I grew so much as a journalist and met these people who are really special and amazing and important to me, so I wish I had done that sooner.

What do you think you will take away from your time working at the Review and carry with you into your post-Oberlin life?

I think probably just a lot of community. I feel like everyone knows that Gigi and I are really close. I’m also really grateful that I got a chance to work with Kush, who was an amazing co-editor and friend. And so many other people that I could mention. Also, the number-one skill I’ve learned is just staying cool in a crisis. I think there’s always a crisis with Oberlin and the Review. There’s always the story that drops last-minute, or the person who suddenly doesn’t want to talk to the Review anymore, or a COVID outbreak. Sometimes, everyone on senior staff gets sick or you walk in on Friday morning to learn that the lawyer said you can’t run your front-page story and you have to redo the entire layout before noon. I think those things used to freak me out, and now they do so a lot less.