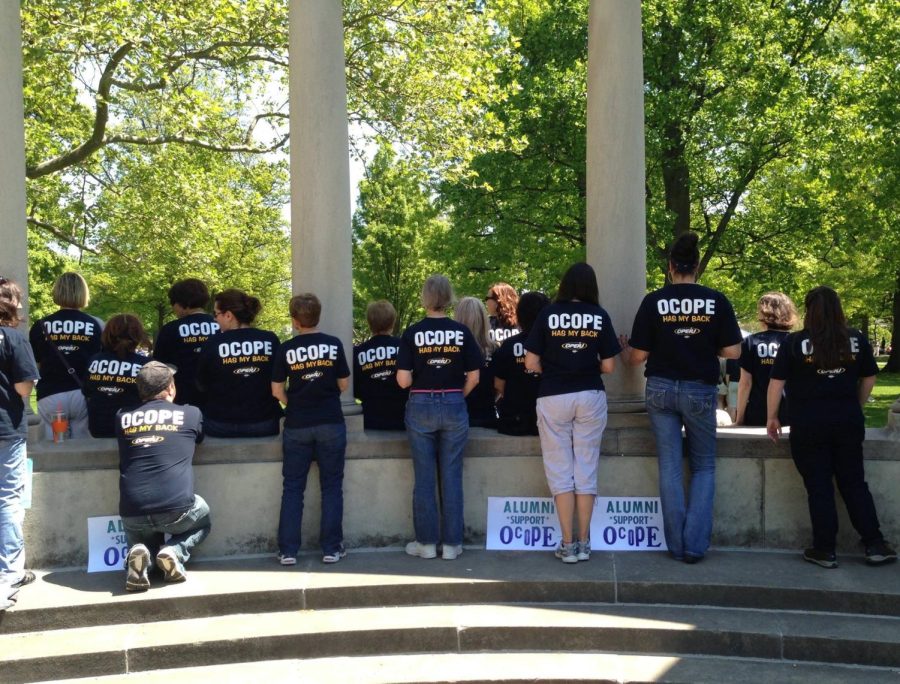 OCOPE, founded in 1970, is the union that represents clerical and paraprofessional workers.

Over the summer, Oberlin College Office and Professional Employees union negotiated and ratified a three-year contract with the College. This contract puts into effect several changes: health care, retirement contribution, holiday, and remote work policies have been amended for OCOPE members.

OCOPE was founded in 1970 in response to inconsistent employee rights among the College’s clerical and paraprofessional staff. OCOPE currently has 125 members from a wide variety of positions and departments, such as the Center for Information Technology, departmental secretaries, library reference and instruction, and clerical workers.

Prior to this summer’s negotiations, OCOPE’s contract with the College was most recently updated in 2019. The 2019 negotiation resulted in increased wages in the second and third years of the contract but also decreased retirement benefits and raised out-of-pocket health care costs.

“There weren’t a lot of changes, but they do have major impacts,” Weir said. “The College is very set on having everybody under one health care plan. And so our membership has lost choice in health care and is going to a high deductible plan, which is already the same health care plan that faculty and professional staff are under.”

According to Weir, the team negotiating on behalf of the College during the nearly two-month-long negotiations process consisted of College Vice President and General Counsel and Secretary Matthew Lahey and various College Human Resources employees. During this period, the teams negotiating on behalf of the College and OCOPE would meet for multiple hours once or twice a week. The OCOPE team was elected by OCOPE members and typically consisted of four or five primary officers, two additional members, and a hired representative.

“There’s this really complex nuance to what you’re talking about, what you’re asking, what information you’re supposed to have access to,” Maiville said. “I’m really proud of what our team did and also grateful that we were able to accomplish what we accomplished.”

Some students expressed discontent with OCOPE’s new contract. College fourth-year and Student Labor Action Coalition Student Worker and Unions Liaison Sam Beesley, while glad that OCOPE has reached a resolution, takes issue with the health care plan. He referenced the plan’s high deductible and the College’s alleged refusal to forecast costs past the plan’s first year.

“I think that’s completely ridiculous and is just a way for the College to withhold information and use it as leverage in the future,” he said.

According to Beesley, he and other SLAC members sought to aid OCOPE in its negotiations.  They were able to provide some support remotely but were ultimately hindered by the fact that the process occurred over the summer when school was no longer in session and very few  students were present on campus.

“The College loves having these negotiations over the summer because they know that students can’t actually be there physically to support,” Beesley said. “It’s very, actually, quite convenient for them that just a couple days before classes started, … they went to a mediator and got everything worked out, which is one of my worries.”

SLAC members and other students have expressed concerns about the College’s motives in its union negotiations following the College’s early 2020 decision to outsource 108 members of College staff who were part of the United Automobile Workers union.

Further, SLAC members also expressed concern about Lahey’s role in the contract negotiation, “who on his LinkedIn touts his union-busting abilities,” Beesley said. Lahey has since amended the language in his LinkedIn profile to remove any explicit mention of union-busting.

Lahey expressed satisfaction with the results of the contract negotiation.

“I was extremely happy that on September 6, 2022, Oberlin College’s Office and Professional Employees union (OCOPE) members voted to ratify the most recent contract proposal submitted by the College and recommended by the OCOPE leadership team,” Lahey wrote in an email to the Review. “The result of this process is an agreement that will continue the College’s commitment to offering competitive pay and benefits.”

The 2022 contract will be published online pending official review by both parties.