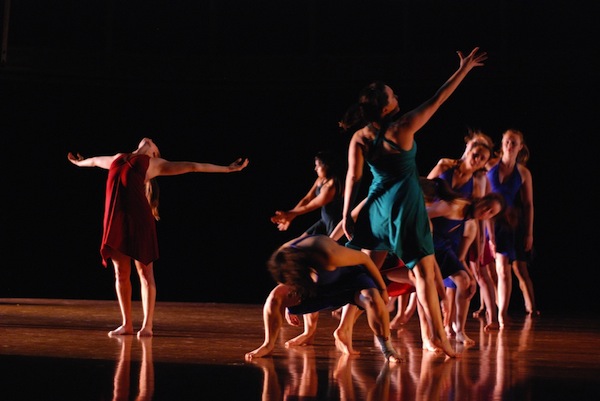 Last weekend marked the first all-student-choreographed Spring Back showcase in two years. While the Dance department’s inclusion of faculty choreography in recent Fall Forward and Spring Backperformances has presented a welcome collaboration of faculty expertise with student talent, this semester’s return to a student focus was both appropriate and refreshing given the amount of skill packed into the two-hour, three-act show, which ran April 12–14.

Although on the whole outstanding, Spring Back’s “blues dance” pre-show, titled “Connection” and choreographed by College sophomore Karellyn Holston, was baffling and lackluster. Representative of neither blues as a dance form nor of Oberlin’s own blues dancers, the piece presented performers emerging one by one from the audience, finding each other on the dance floor in the front of the room. Blues is a social dance, so it did not translate well to the stage — especially because the piece was mostly improvised and done so by inexperienced dancers. Holston’s brief choreographic interludes attempted to unify the piece and the music, but ultimately, “Connection” and the awkward applause it received were an ill-fitting opening to the evening.

Nonetheless, the first piece in the program, choreographed by College sophomore Elaine Liu, put the show back on track. A contemporary ballet piece, “Faraway Lands” seamlessly transitioned between the pedestrian and the classical. It began with five dancers walking in a column of light, suddenly moving into petit allegro jumps. The technique was skillfully executed: One could see the breath in the dancing and the intention in the lines of the performers’ legs. Liu made use of dynamics and space, incorporating oft-forgotten slow motion and successfully weaving floor work into a ballet-inspired piece. It was refreshing to see the Dance department showcase this lyrical, technical genre of contemporary dance — which at Oberlin is all too often neglected — right at the outset of Spring Back.

Standing in stark contrast to the pace and movement of the previous work was College senior James Pressley’s “The Sanctuary. The Cage.” While mechanical noises sounded in the background, Pressley recited a spoken word composition as he danced. Pressley began in a supine position, watching his feet move. Once upright, his dancing was all sharp angles and strength as Pressley demonstrated his athleticism and incorporated almost gymnastic moves. Particularly impressive were his slow cartwheels across the downstage. Saying “I am bound to myself,” he wrapped himself in a large white cloth, binding it around his ankles and enveloping his body during a backward roll. He ended with a striking visual: traveling across the floor, his ankles and wrists shackled by the fabric, in an undulating walk initiated by his knees and shoulders.

The first act concluded with “Reverie” by College sophomore Ruby Smith, followed by “Rapture” by College junior Julie Gaynes and College senior Matthew Willner. In “Reverie,” eight dancers in flowing, white shirts kneeled as if in prayer. This piece continued a trend present in most of the works in Spring Back: that of the dancer using her own hands to move other parts of her body, an explicit visualization of the struggle to get one’s body to do what one’s head wants. Overall, the style of the choreography blended in with the other pieces; it was beautiful and well-danced, but not particularly remarkable. “Rapture” was the show’s only non-contemporary piece. Gaynes and Willner are acrobats, and they had the audience enraptured with their amazing (and nerve-wracking) feats. The audience’s initial whoops were inappropriate to the setting, but over the course of the piece, Gaynes and Willner challenged those who doubt that acrobatics is dance.

Part two of Spring Back consisted entirely of “L(I)nked,” College senior Anahita Khosravi’s senior project, a 35-minute exploration into interpersonal interactions and individuality. To those who saw last semester’s Fall Forward, the first section of the piece was familiar: the 15 dancers in colored dresses, each with her own repeated theme, coming together into one line that traveled across the floor. Individual dancers would break out of the line, only to be reabsorbed, and the dancers performed a combination of robotic moves and fluid body rolls all in sync. Khosravi successfully integrated her hip-hop experience into the dominant contemporary technique, and it was fascinating to revisit the opening section as a prelude to a longer piece. In a particularly significant moment, a few dancers walked around, covering their eyes but visibly still watching, craning their necks to see one another. Conservatory junior Isaac Jones’s music was a fantastic complement to the dancing, proving evocative in its conversation with the visual performance.

As the piece went on, dancers began to leave the stage one by one, color by color. The gradual peeling off of dancers generated the anticipation that those backstage would return for a finale. Instead, the piece ended with College first-year Madeleine Klein alone on stage, defying expectations and asserting the piece’s message of individuality. Khosravi’s work was hugely impressive in both concept and execution.

The final — and strongest — section of Spring Back opened with the other standout of the night: Klein’s contemporary ballet solo “diprotic.” Klein is a virtuoso dancer, adept at ballet, contemporary and hip-hop, and her solo demonstrated both her choreographic and technical talents. Beginning like a ballet adagio, the piece slowly incorporated quirkier elements; like Klein correcting the position of her head with her hands or jerking out of ballet postures into upper body isolations and contortions. Over the course of the piece, she devolved out of ballet into more experimental moves, including a mind-blowing walk on the fronts of her toes. The moments of modern technique and Klein’s careful accentuation of the music made the choreography especially interesting and fulfilling to watch.

In “Untitled,” College junior Winona Brown returned to themes explored in her Fall Forward duet, this time with a group of five dancers performing in silence. Clad in nude spandex, the dancers coalesced into a single organism, walking together, sitting on one another’s laps and lying down in a stack. A particularly moving visual came when College first-year and Review staffer Silvia Sheffield stood holding Brown curled up on her lap while the other three dancers surrounded them, so that all five were positioned in a giant embrace. The piece concluded with a collaborative feat: Two pairs balanced on one another’s arms and shins, moving their limbs back and forth, one dancer lying on the floor and the other crawling in midair.

The night concluded with College senior Jael McCants’s “Still, I’d be on my feet” featuring music by Conservatory senior Sam Rosenberg, a powerful piece in which the dancers channeled their energy into jittering fingers and athletic jumps and runs. McCants played with tempo variations to great success — the dancers took their time, but during the rapid staccato combinations looked as if they were moving in fast forward.

This semester’s show demonstrated that Oberlin has entered a new era of dance. Upperclassmen may remember a time when Fall Forward and Spring Back displayed a handful of terrific pieces amid a sea of mediocre works. This is definitely no longer the case. That all of this semester’s dances upheld a level of technique in one of the longest showcases in recent memory, and one without any faculty choreography, is a testament to the growing number of talented student dancers and choreographers on campus. This semester’s show was as heavily contemporary-focused as usual, and the similarities among the pieces were quite obvious, as is to be expected from a community of artists who work closely together. However, the showcase of contemporary dance forms was expanded to include the more lyrical and balletic on one end of the spectrum and contact-based on the other. This was aSpring Back not to be missed, one that should have made all dancers in the audience, if not all viewers, jealous that they were not on stage exploring the possibilities and emotions of the human body for themselves.